The sprawling bulk of Pico del Tajo de los Machos, left, with villages clinging to its flanks. Centre left, and just to be seen, is the summit of Veleta, with Mulhacen to the right

CRUNCHING up an old mine track in the cool evening air of a deep ravine. Young ibex scuttle about in the undergrowth; a flight of partridge rises in clamour; and wild figs hang abundantly in the many trees. Down in the valley around the town of Orgiva the figs have withered in the autumn sun. But up here amid the shady folds of Sierra de Lujar, the blue and black varieties are still to be gathered. I pluck a couple and devour them breathlessly, while trying to run uphill. Figs are not meant to be eaten like this. 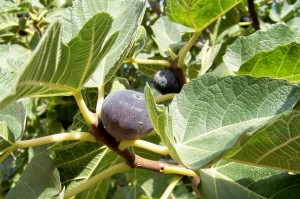 So this is me attempting to run to the top of the 6,072ft Lujar from the main road above the Rio Guadalfeo. Fell running isn’t my strongest or most graceful skill, though I enjoy it immensely. I haven’t a hope in hell of getting anywhere near the summit, but I am consumed by an overwhelming sense of urgency.

Last night, while flicking through a Sierra Nevada guidebook I bought at a tobacco kiosk in Granada, I discovered that the mountains in this area are growing at a rate of 0.5mm a year because of continental uplift. The Sierra Nevada was formed during the Alpine orogeny 300 million years ago (as were the Pennines, though this isn’t in the book) through the “movement and collision of the African plate against the Central Iberian Massif”. And this uplift continues today. The longer I take to climb them, the higher they will be. This is an alarming prospect.

With this gnawing at my mind, I was making my way along the back lanes below Orgiva this afternoon to meet my wife in the town’s market, when a delightful Englishwoman called Melody offered me a lift in her dusty car. After enquiring where I was from, she subsided into a dream-like haze and said wistfully, and rather theatrically:

“Oh, Darlington. Yes, I remember Darlington back in the Fifties. My most vivid memory of Darlington is of the waves crashing on the promenade.”

I cannot describe the surge of panic that swept over me. Outside this rattling car the world was changing at a furious pace. The mountains were growing at a rate swift enough to be measured on a blackboard ruler, and in the space of sixty years the tectonic plates had shifted Darlington 17 miles inland. I had no idea it had once been on the coast.

I needed to climb Lujar before it became even higher. After thanking the delightful Melody I had a quick coffee with my wife, made an excuse, and hurried back to the casita at La Luz for my running shoes.

So I’m slogging up the shady ravine to a junction where the track to the San José mines branches off to the right, and I continue straight ahead and up a steep incline to emerge on a prominent ridge that can be seen from Orgiva – a ridge crossed by an aerial ropeway that once carried minerals from the mines down to the mill at Los Tablona.

And I run and I run and I run, up into the splendid evening air. And the high peaks of the Sierra Nevada – Veleta and Mulhacen – are standing blue in the north. To their west lies the sprawling bulk of Pico del Tajo de los Machos (the next mountain on my expedition list) with white-walled villages clinging to its flanks and Orgiva at its feet; and west again the shapely summit of Cerro del Caballo.

Looking up the ridge towards the summit of Lujar 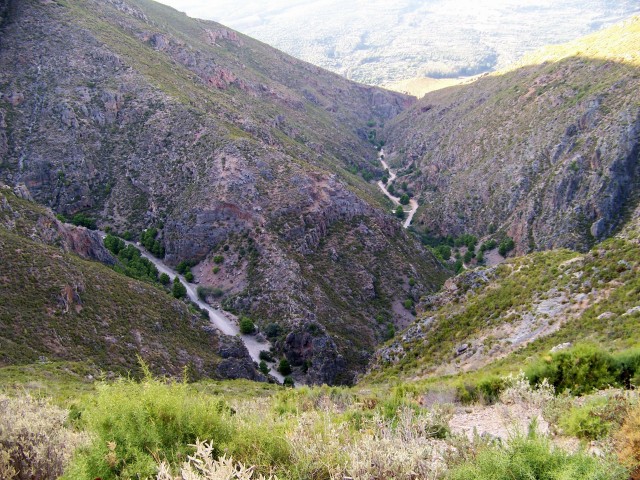 The mine road winds down through the ravine towards Orgiva

I trot up the ridge through scrub and stunted oak along a faint path that looks like it might zigzag between the gathering crags and lead to the summit of Lujar. And well it might. But this is as far as I get because the sun is going down. Time and tectonic uplift have defeated me.

In the last rays of a hazy evening I pluck a sprig of wild rosemary to flavour tonight’s fabada, take a swig of warm water from my bottle, then turn about and head down into the shadows. Meanwhile, several thousand miles to the north, a sudden unleashing of geological pressure nudges Darlington another three inches towards Shap. 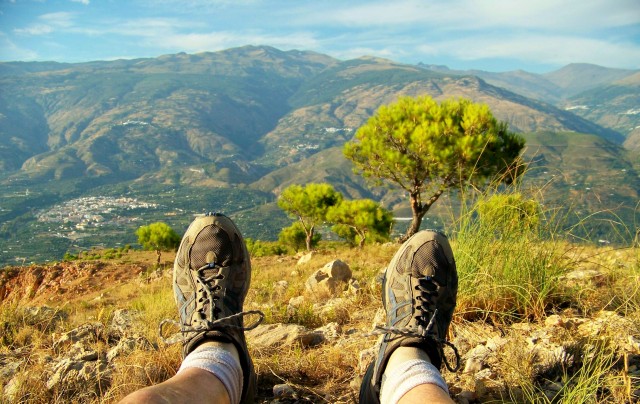