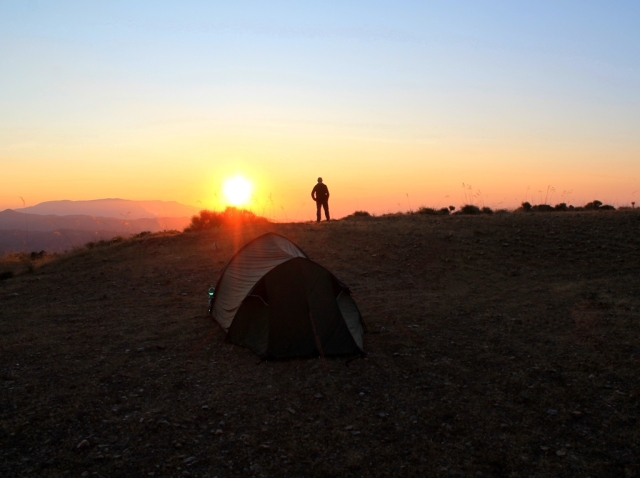 SPENDING a night on the summit of a mountain, watching the sun sink into a splash of gold and the constellations revolve in blue-black emptiness, does have a romance and a sense of adventure about it. There is something raw and primeval, and almost spiritual, about night-time in the mountains. Where the grit of the earth meets the majesty of space, senses are sharpened and awareness heightened. Up there, in high places when the sun goes down, our perceptions alter. And so does the world . . .

I’ve been planning to embark on a trip like this for several months. Previous attempts to spend nights on summits have always ended in disappointment. Imagined sunrises are bright and flood the world with awe; reality sunrises are bleak, wet, and obscured by clouds. At least, they usually are in my native Cumbria. But here in Spain things might be different.

This departure from conventional hill-walking has been inspired by Kate Tyler’s blog katewildcamping. I’ve known Kate for many years but discovered her blog only recently. Occasionally, she will grab a tent or bivvy bag, climb a hill, and spend the night in the elements. And I think: yes, why sleep in the same familiar room when you can relax in the wilderness beneath the Milky Way, while shooting stars streak across infinity? What’s wrong with that? Absolutely nothing. It’s a great idea.

So here I am in the hamlet of Haza del Lino, high in the Sierra de la Contraviesa, with my rucksack stuffed with essential equipment. The Contraviesa is a long range of rolling hills, flanked by the Mediterranean to the south and the Sierra Nevada – Spain’s highest range – to the north. At their western end stands the lonesome Sierra de Lújar like the capital letter at the beginning of a sentence, with the rather bulky full-stop – or possibly exclamation mark – being provided by Sierra de Gádor in the east.

My destination for the evening is Cerro de la Salchicha, which at 1,537 metres (5,043ft) is the highest peak in the Contraviesa. If this sounds a little ambitious for an evening stroll, let me tell you that Haza del Lino – which has a restaurant, a cork works, and a field full of mules – sits rather grandly on the 1,239 (4,064ft) contour. So my total ascent is a mere 298 metres, or 979ft, through pleasant cork oak woods.

Despite its wonderful title, my friend Mjollnir MacAlba tells me Cerro de la Salchicha translates somewhat prosaically as Sausage Hill, or Hill of the Sausage. He is correct, of course. I am at a loss to explain this phenomenon because I’ve studied the mountain from several angles and the last thing it resembles is a sausage – even a lump of Lorne sausage that’s sagged in the oven. During the course of the night, though, theories develop.

A lorry laden with cork in Haza del Lino. I like to think that if the driver accidentally went off the road into a river, the lorry would merely bob about on the surface

I leave the main road west of the village, pass a sign that says in Spanish “hunting prohibited”, and follow a steep path through this ancient cork oak woodland, which is said to be one of the largest and highest cork woodlands on the Iberian peninsula. Cork is big business in the Contraviesa, and all the trees in this locality have recently had their trunks stripped of bark. This will regenerate eventually, but at this stage of the process the trees look curiously sinister. 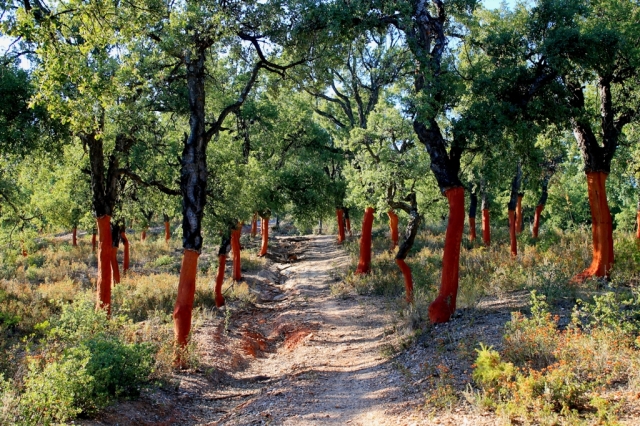 Immediately, I stumble across deep ruts in the track and patches of woodland floor that has been disturbed – sort of scooped up, turned over, forked through and trodden. I recognise the work of wild boar, grubbing for roots and worms with their tusks and hooves. These ruts and patches of tusked ground are not isolated. They are everywhere. I climb higher up the path, hoping to emerge above the band of woodland these animals inhabit, but the ruts and holes become more frequent. Two days later I find this quotation on a website about the Contraviesa’s cork industry:

Wild boars are ubiquitous all over the place. You can appreciate the holes they use as bathtubs . . .

I proceed with caution. I blundered into a herd of wild boar last year on the slopes of Lújar, and although they trotted off into the trees, leaving me unmolested, they gave me one hell of a fright. Boars can be killers, especially the females when guarding their young, and during the rutting season, which lasts from November to January. This has taken the edge off my evening excursion and knocked my confidence somewhat. Suddenly, every large tree has a boar hiding behind it; every dark patch of woodland is shading a family of black, tusky beasts. 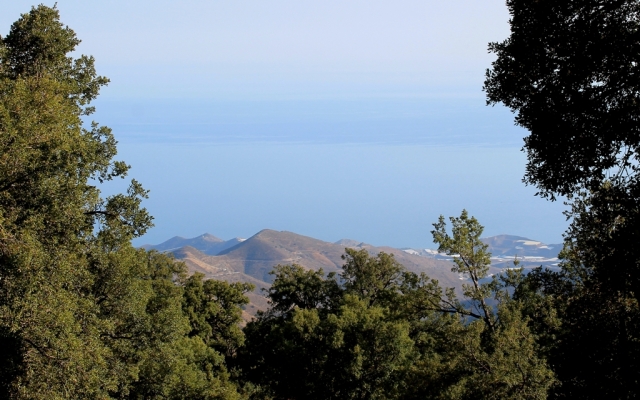 A view over the foothills to the Mediterranean. The photograph is a bit deceptive: the horizon is about three-quarters of the way up the picture 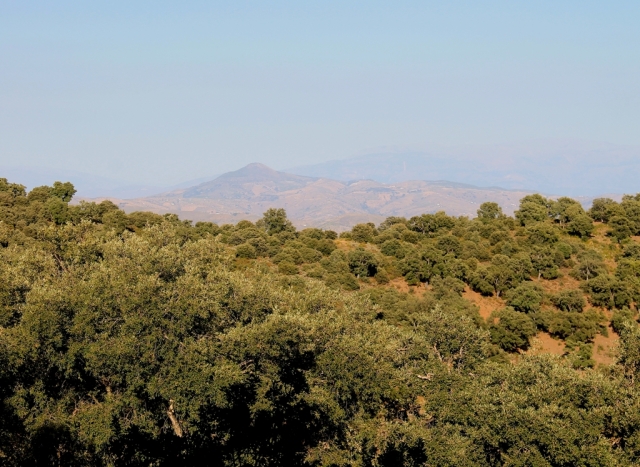 I emerge from the cork woods onto a firebreak. A Land-Rover track follows the firebreak to a lookout post on the summit, inside which sits a chap who obviously receives few visitors because he seems genuinely pleased to see me. This is a chance to try out my knowledge of the language, and during the course of our conversation I learn his job is to watch the forests for fires; it gets very cold up here at night; and if I am to gaze at the stars I will need a warm jacket and trousers, not the T-shirt and shorts in which I am standing.

It is very beautiful up here, I remark, loosely waving an arm towards the watery blue Sierra Nevada to the north. He grins and holds up an index finger, replying: “Si, por un dia,” meaning that after the first day you have seen everything. 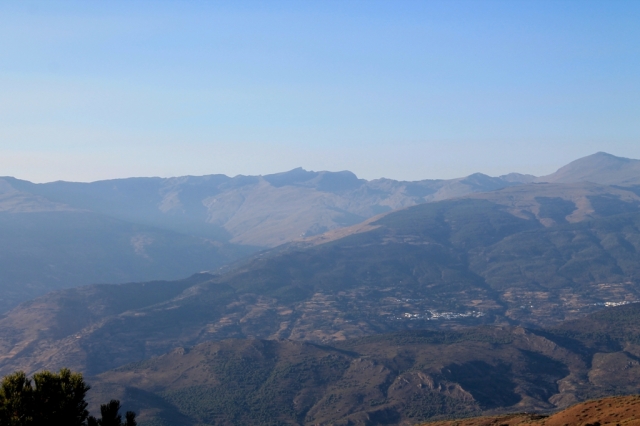 The Sierra Nevada with Mulhacen, the highest mountain in Spain, on the right, and Veleta, the second-highest in the range, the fin-shaped peak in the middle.

I note that on the summit, in the stony scrubland that surrounds the lookout post, the scratchings and scrapings of the boar are numerous and fresh. I take my leave of the friendly lookout and retreat along the track to a glade between pine trees that looks perfect for camping. And perfect it is – except the ground is pitted and churned by tusks and trotters more heavily than ever.

I decide to pitch the tent in the open in the middle of the firebreak, which is about fifty metres wide. It is barren and stony ground, and there are few signs of the boars’ presence – just the odd scratch and occasional pit. But this location offers clear views to the east, west and south. Good enough.

And then comes the sunset, with the flaming red disc of our nearest star sinking directly behind the summit of Lújar. And with the sunset comes the chill of night and the infrequent, though unnerving, noises of the forest. I don’t know whether to remain alert or go to sleep. In the end I do a bit of both. 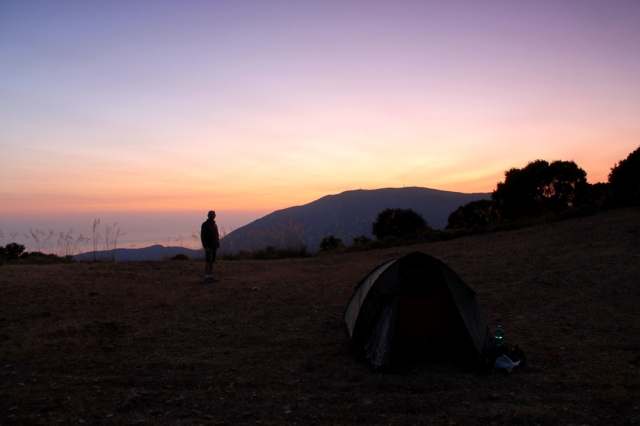 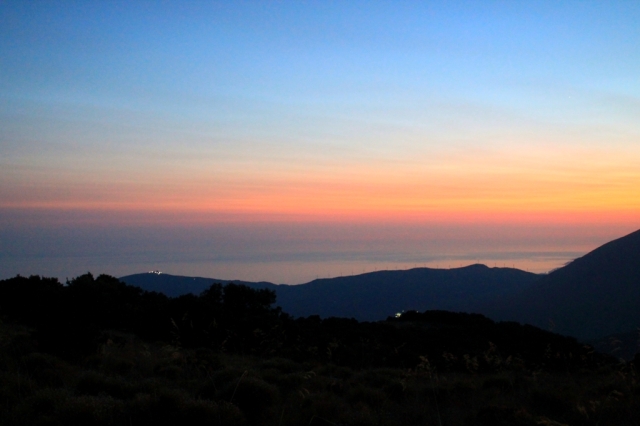 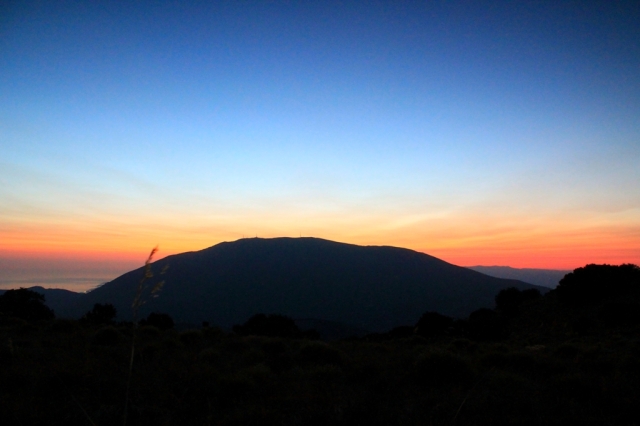 Strange things pass through the mind when you sit on the shoulder of a benighted mountain in Andalucia. Up until this evening, my main concerns had focused on snakes and scorpions creeping into my sleeping bag. Now, as I gaze through the open door into the scrubland and starry sky, the object of my fears is larger and hairier. Do I zip up the tent door and curl into a defensive ball? Or do I leave it open for a swift escape? Are Petzl headlamps and a camera flash sufficient to scare off a boisterous animal? Or will I succeed in enraging it further? Can I sprint to the nearest cork tree and clamber into the branches? Or will it have me by the ankles before I’m off the ground?

I zip up the door at 2.30am and slip into the sleeping bag fully clothed except for my shoes. I fall asleep and dream about sausages. I’m still alive at 7am when my phone alarm wakes me.

Outside, the sky remains dark but a band of grey behind Sierra de Gádor marks the dawn of another day. Half an hour later, the grey is a smouldering orange streaked with yellow. I stand at the edge of the firebreak with my camera and tripod, body wrapped up against the Spanish cold, while from the cork woods occasional though distant noises drift through the motionless air. I don’t know what’s making the noises and I’d rather not find out. Things that live in the woods, that’s all I need to know. 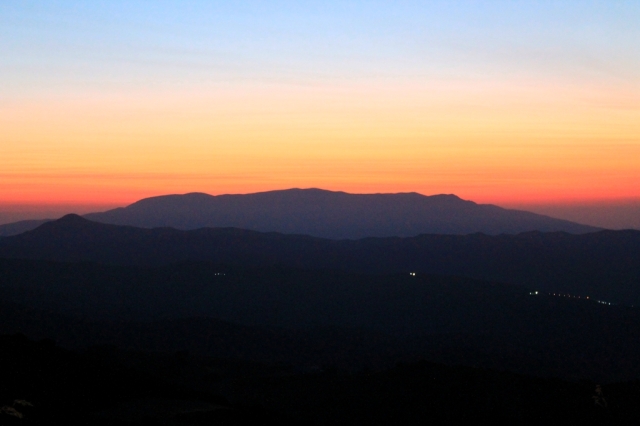 Time passes, then suddenly and unannounced this great red ball heaves itself above the southern slopes of Gádor. Last night it sank behind the capital letter and now it’s re-emerging from the full-point. That’s one hell of a sentence. And with the red, which soon becomes yellow and then white, comes a rush of warmth. It’s morning – just like that. I pack my gear and set off down the mountain. 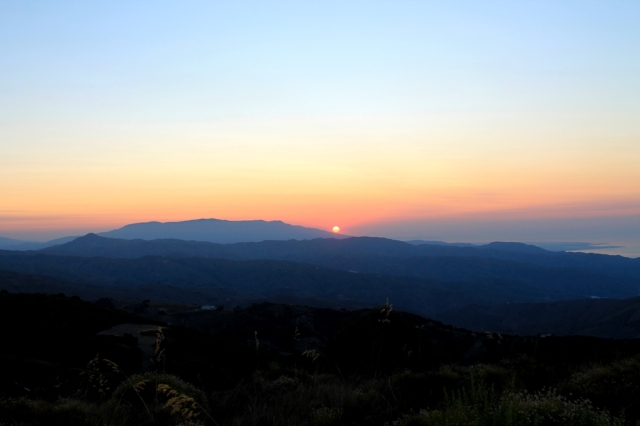 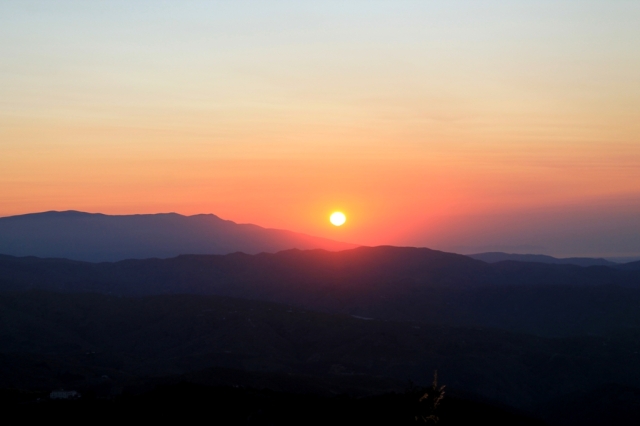 Call me a softy, but I keep to the Land-Rover track during my descent, avoiding the steep and rutted path through the dark woodlands. But even this smooth dirt road is pitted with scratchings and hollows where the boars have been grubbing. Some of the pits are large enough for an adult porker to immerse its body. Don’t want to turn a corner and interrupt an angry male taking his morning dust bath.

So, Hill of the Sausage. How does a wooded mountain in Andalucia acquire a name such as this? Is it linked to its abundance of pork? One of the most popular pork products in Spain is the sausage – from white butifarra to spicy red chorizo to blood-black morcilla and every shade between.

My alternative theory is that Salchicha is a corruption of an older name – similar to Eel Crag, in the Lake District, which is nothing to do with eels. The name derives from the Old Norse “Illr”, meaning steep or evil. Likewise, no bells ever rang out from neighbouring Cat Bells. The original Catt Bields (a mixture of Old and Middle English) means “refuge of the wildcat”.

I have no doubt both theories are far from the truth. But it’s the best I can do in the circumstances. Can anyone out there offer a more convincing explanation? I’d offer a kilo of salchichas as a prize for the best theory but they’d go off in the post.

22 Responses to An Uneasy Night on Cerro de la Salchicha