THROUGH a settling of plaster dust I snatch glimpses of snow-capped mountains. Above a hammering of nails I hear gusting wind in treetops and the cry of a bird. And when the wind sweeps away the sharp tang of varnish there are traces of pine and wild herbs in the air. I think about the track that runs along a riverbed from our front gate and off into the hills. In the three months we have lived in this place I have failed to venture more than three-hundred metres along its stony course. If I possessed a spark of adventure I’d drop these tools, pick up my rucksack, and set out to explore this new country. All work and no play makes Jack a dull boy, as someone once said in a memorable film. So off I go . . .

The peaks of the Sierra Nevada rise before me to the north as the track climbs through olive groves towards the snowfields. Then it veers west, labours steeply and stonily to green orchards above the riverbed, passes a cheese factory and an olive mill, and delivers me into hilly countryside where poppies bend and butterflies glide on a warm March breeze. 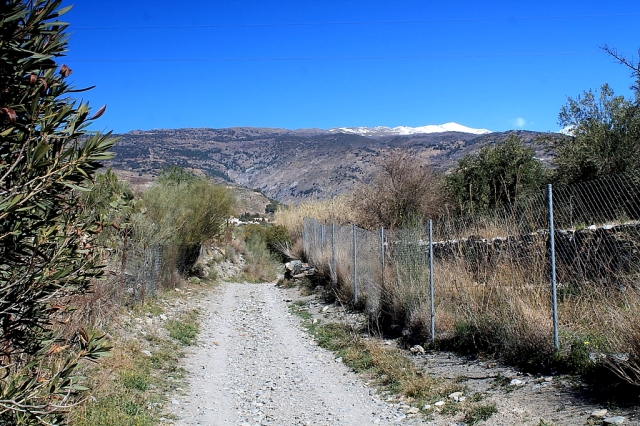 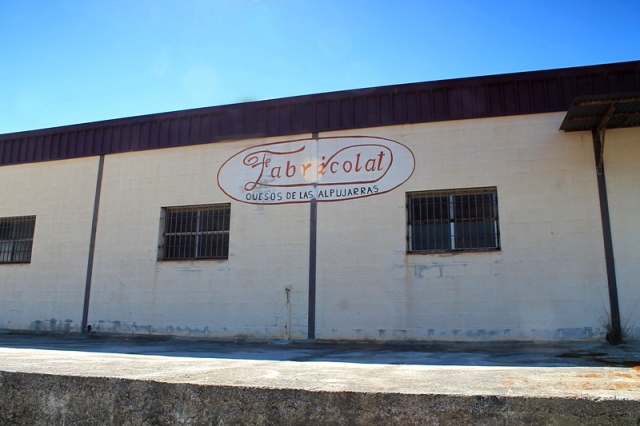 This is more like it. Fresh air; fresh land; fresh horizons. A chap can plough himself into a rut when working on a new house. I don’t like DIY at the best of times. It can be a frustrating yet sometimes unavoidable intrusion. In fact, I had a panic attack in the B&Q store in Darlington once while searching for carborundum paper. Shortage of breath, racing pulse, sweaty brow, spinning floor tiles. Palms going wet and dry.

Just needed to get out beneath open skies, away from those claustrophobic aisles of flashy tools and monstrous equipment that people buy to bugger up their weekends.

I have a theory that DIY – like dusting the house and scrubbing the front step – is an invention of the idle classes to keep we lower orders occupied during our spare time. Measures like this prevent social unrest and insurrection. They divert our energies.

Hungry masses on the streets? Lower the price of hardboard and get them boxing-in their bedroom fireplaces. The dockers after another tanner? Start a craze for plywood pelmets. Chartists marching through Newport? Roll out the loft insulation and offer fifty-percent improvement grants for a limited period.

Forget strong drink and gambling – DIY is the curse of the working classes. I realised this while growing up in the 1960s. Why put yourself out to build a new Jerusalem when for a couple of days’ wages you can cover the kitchen ceiling with polystyrene tiles, concrete the forecourt garden and remove every last trace of those beautiful red and black tiles that graced the lobby floor?

Did anyone ever see a picture of Che Guevara with a Black and Decker orbital sander in his hands, or Nelson Mandela wielding a cordless hedge trimmer? No. What more proof do you need? Back to the walk. 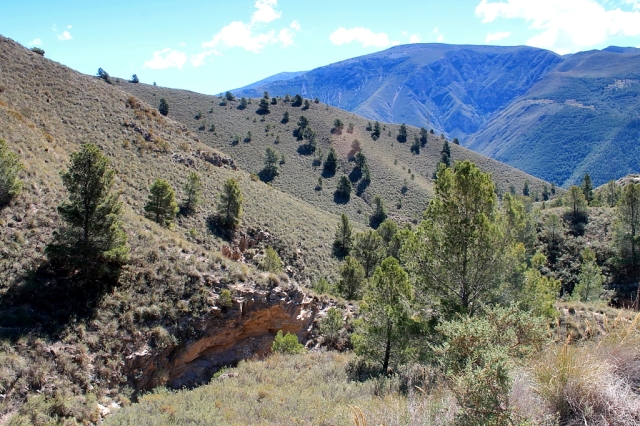 I have no map of this area so I possess only a vague notion of where I’m heading. Tried to buy a map in Orgiva, the local town, but maps as we know them are not widely available here in Andalucia.

Luckily, because I was a sixer in the Wolf Cubs (1st Askam and Ireleth, 3rd Duddon) I am able to navigate by the angle of the sun and the rings in tree stumps. So although I no longer own a pair of those tracker shoes that had a compass in the heel and animal paw prints on the soles, I am pretty adept at finding my way.

My path drops me down into a delightfully narrow valley, its slopes clad in pine and eucalyptus. I’m winding my way south and the gigantean bulk of Sierra de Lujar dominates the view. Lujar is the last mountain before Africa. And pretty damned impressive it is, too.

There are ruins in this valley – tumbled walls of homesteads long abandoned; overgrown terraces where olive trees still flourish; the remains of water courses and reservoirs. And it is so peaceful. No one lives here. Nothing challenges the silence but birdsong and a whispering breeze. 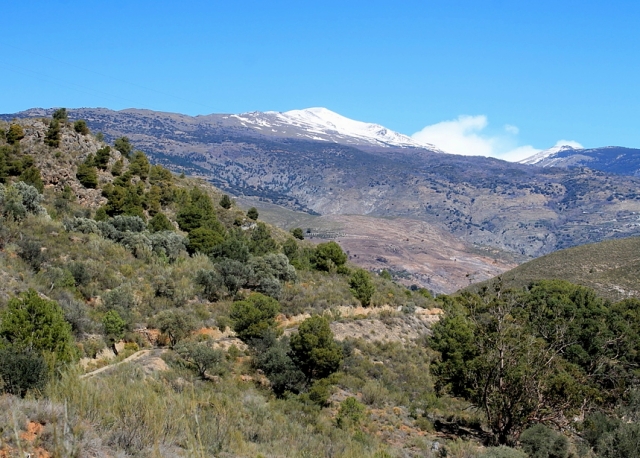 The track descends to Lujar’s feet and the valley basin of the Rio Guadalfeo. How many mountains have been crushed to form this massive alluvial plain, I wonder? How many millennia have marched past, back to back, while these sediments accumulated? The forces at work here are too formidable and the timescale too vast to contemplate. Better just to sit on the warm shingle, eat a tin of tuna, and watch the river swirling past, bearing its occasional microscopic grain to add to the pile. 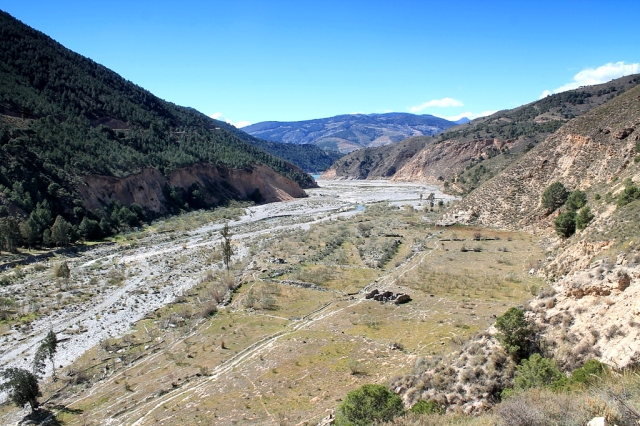 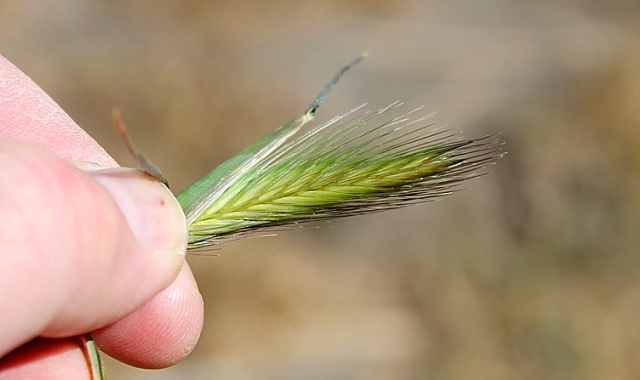 Barley was once one of the main crops in this area but now it just grows wild. It would have been nice to wander along this valley and doze for a while in a field of golden barley

I climb another river valley and head back towards my starting point, passing through the settlement of El Morreon. This is one of Orgiva’s thriving alternative communities. Its citizens inhabit a variety of structures, from traditional Spanish cortijos to old busses, caravans, horse boxes and shelters manufactured from recycled materials. Bald tyres and industrial pallets are items of necessity. B&Q decking and Ikea bookshelves don’t get a look in. Thank god. 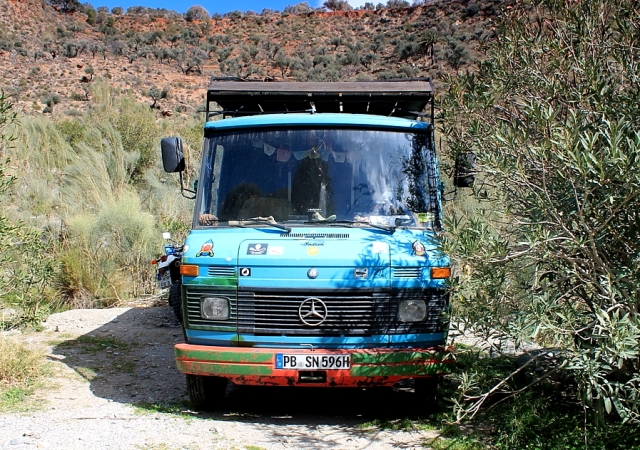 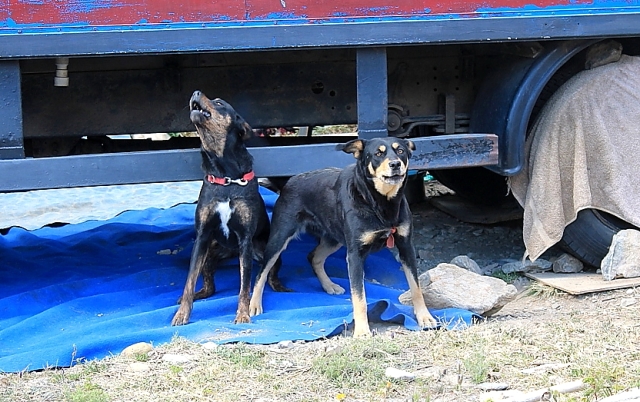 Back at the house, paint brushes are stiffening on dusty windowsills. A depressing array of tools lies scattered across the kitchen floor. I have returned to the land of the non-dead. But at least I cast off the chains of servitude for a few brief hours and tasted the sweet air of freedom; raised my eyes to the sky and beheld the heavens, not a newly-fitted Bricomart ceiling rose with twin flex and retro lampshade.

So let the struggle continue. La lucha continua, as they say over here. The fight goes on. ¡No pasaran! And no more polyfiller. Not much anyway.