In the Valley of the Toril

The 3,000-metre summit of Pico del Tajo de los Machos rises above the valley of the Rio Toril and the ruins of Cortijo Antonio Domingo

PATHS. They begin at our door and run through our lives. They rise and buckle and lead us to unknown places. They appear in all guises: woodland paths; coastal paths; moorland paths; paths of righteousness; paths of destiny. Sometimes they are little more than faint runnels crossing wasteland along which bent men plod and dogs follow. Sometimes they are enchanted ribbons where poets linger. Most were made with purpose though some without consciousness. They link places and experiences. And they all lead somewhere . . .

Several weeks ago, while visiting the village of Capileira, I spied a path of the enchanting variety sweeping across the steep slopes of the Poqueira gorge towards Mulhacen, Spain’s highest mountain. It was a cobbled path, elevated on terraces and fashioned by men who knew what they were doing.

I sat on a wall and traced its course into the shady gorge, not knowing where it led but overcome with a desire to find out. This path was more than a runnel between places; it was a thing of beauty enticing me towards unseen waterfalls, high pastures, and mountain glades where sunlight drips through green canopies.

Today I’ve returned to Capileira (altitude 1,444 metres). The sun rises behind dark rocky mountains as my path delivers me into the inky shadows of the Rio Poqueira. Cowbells chime beneath folds of chestnut and oak. Streams chatter. A wholesome feeling warms my breast and my pace quickens. 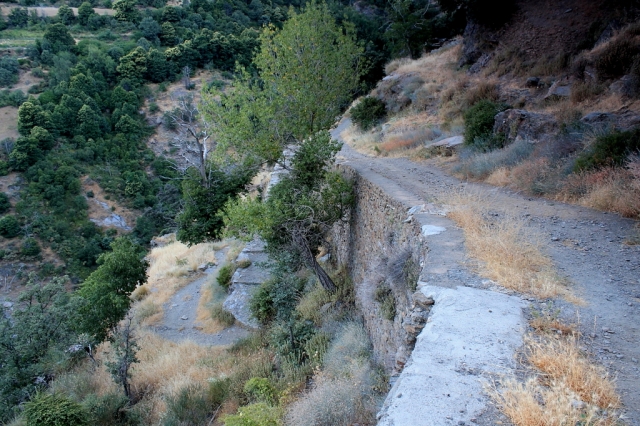 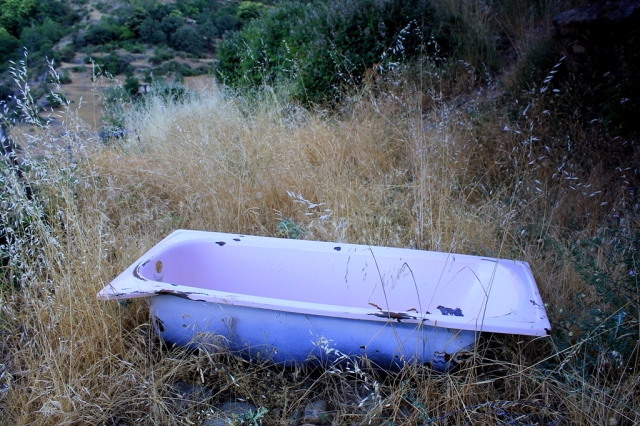 A corner of a foreign field that might well be forever England – only it’s Spain. Good to see old baths used as animal troughs. Not so sure about the pink colour scheme, though . . .

Let me tell you about my plan. Basically, it doesn’t exist. It’s more of an idea than a plan. Sometimes this type of arbitrary approach to hill-walking works well and results in a memorable excursion; though, admittedly, there exists the potential for disaster. But what the hell.

I possess a map of the area – Sierra Nevada Parque Nacional, scale 1:40,000 – and although it’s not a particularly good map, and I have allowed it to lead me astray on previous occasions, I have located my path amid its tattered folds and determined it meanders through peaceful mountain pastures to a settlement called La Cebadilla.

La Cebadilla, which is little more than a remote hydroelectric plant in a shady ravine, is not unknown to me. It can be reached by car along an interesting dirt track and was the starting point for my ascent of Veleta – Spain’s third-highest mountain – back in 2009. The ascent, although successful, was nothing short of torture. I will not be embarking on such an undertaking today.

But from La Cebadilla I can head for new places, such as the valley of the Rio Toril, tucked high in the crumbly folds of the Sierra Nevada. I’ve read that up there in that seldom-frequented place are three abandoned farmsteads. Sounds like it’s worth a walk. 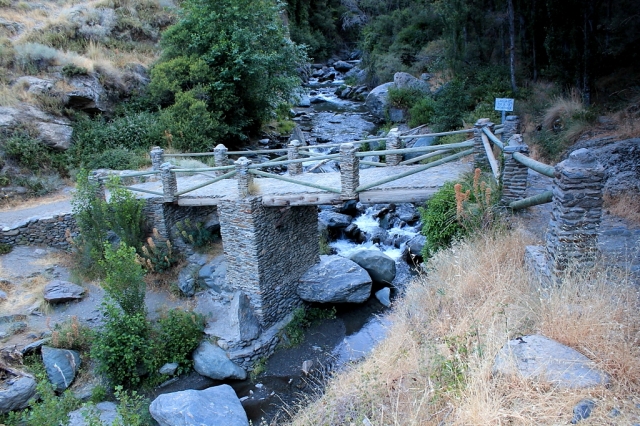 From the white walls and red-tiled roofs of Capileira, my path takes me in steep zigzags down into the gorge of the Poqueira and the deep shades of early morning. I cross the river on a stone bridge – el Puente Abuchite – and begin my climb to La Cebadilla, traversing meadows and woodlands, and passing ruined cortijos and stone-flagged threshing floors where men who long-since breathed their last scraped a living from crops of oats and barley.

A threshing floor. Gerald Brenan, in his book South from Granada, goes into how these structures functioned. The oats or barley was spread over the flags then a mule or donkey was led in circles around the floor, pulling a man who stood upon a wooden sledge. The action of the sledge on the cereal crushed the seeds from the stalks and chaff. When the evening wind got up, which it always does at harvest time, men with pitchforks tossed the material into the air, and the stalks and chaff were carried off in the breeze, while the seeds fell back to the floor 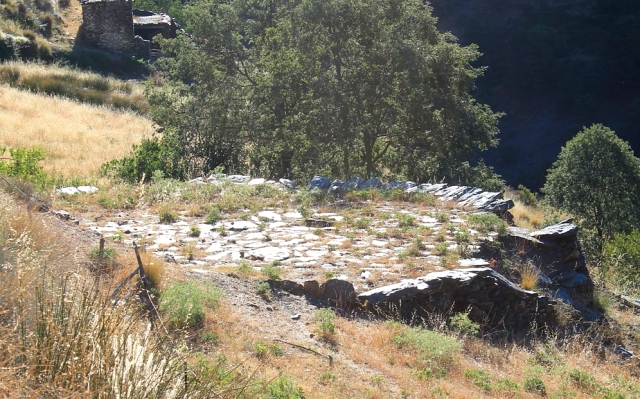 Here’s another, a little further up the valley. Threshing floors were always built on hillocks or places where they would catch the wind

As I anticipated, this path is a joy to tread. In contrast to my recent walk up Sierra de Lújar – which I can see in the distance – there is no shortage of water. Fresh streams tumble across the route at almost every turn. Green is the dominant colour; the subdued roar of the Poqueira the dominant sound.

A little over an hour after setting out I saunter into La Cebadilla. This is an odd place. Built to house construction workers during the 1950s, nothing remains except the hydroelectric plant and a scattering of shabby buildings (houses, chapel, pigsties, hen-runs), most of which appear to have been abandoned many years ago. It is, by all appearances, a ghost settlement along the lines of those mining towns of the Old West. No old-timers here, though. Perhaps the occasional appearance of a couple of workmen maintaining the generating plant, and the infrequent part-time farmer visiting his scattered herd, but like the gold rush of the 1840s, the construction rush of the 1950s has come and gone. 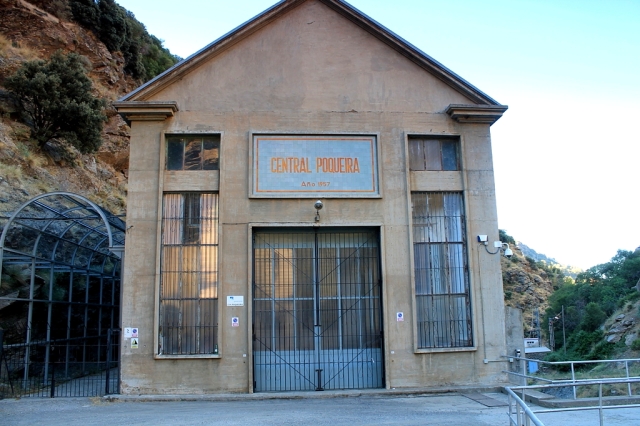 Here’s something to ponder. Southern Spain, with its Mediterranean climate, spends a large portion of the year in what can reasonably be described as a state of semi-drought. But before this small though energetic river reaches the coast, it encounters at least four substantial hydroelectric plants generating renewable energy cleanly and efficiently. Yet in some parts of Europe there are very rainy countries where water is allowed to drain into the sea unused and hosepipe bans are imposed at the drop of a chief executive officer’s hat. Do you know one?

La Cebadilla also signals the end of the pleasant climb from Capileira and ushers in the steep and gruelling slog up the Loma Púa ridge towards the summit of Veleta and the crumbling spine of the high Sierra Nevada. I’ve climbed this route before, though today I’m jumping off at the first opportunity and heading into the Toril valley. But not before trundling wearily around the twenty-two hairpin bends of the initial section while ascending into burning sunshine.

Rewards are showered on the struggling in the form of fragrant, semi-Alpine meadows through which the path meanders, and views of the imposing southern slopes of Mulhacen. Up here, I am alone in the majesty of the mountains. The sweaty slog – as with most sweaty slogs, I’m sure you’ll agree – is worth the effort.

Puente Toril is an iron bridge bounding over pipes that deliver water under pressure to the hydroelectric plant hundreds of metres below. These hydro schemes were built during the Franco era. It would be interesting to know if forced labour was used, as it was in other sectors during the post-civil war period. I should look into it. But not today.

Another pleasant path takes me through scrubland into the valley of the Rio Toril. The great whaleback of Pico del Tajo de los Machos dominates the valley head, shepherding back uncomfortable memories of an ascent in October 2010. That was an unforgiving and thoroughly disheartening slog as well. Come to think of it, all the mountains are like that round here. The Munros of the Scottish Highlands are picnics by comparison – even that demoralising and seemingly endless slow-motion trudge up Ben More from the A85. But at least you get sunshine and a guaranteed view on Pico del Tajo de los Machos – two things I certainly didn’t get on Ben More . . . and many of its neighbours, now I think about it.

My path conveys me to the ruins of the three cortijos – or country houses, if I may employ a common and generous euphemism. It becomes evident that these structures – Cortijo Toril, Cortijo Antonio Domingo and Cortijo Combate – have not been abandoned in the strictest sense. Basic shepherding tackle is stored in several of the buildings; the roofs are maintained; and they are still used as rudimentary shelters by, presumably, the people who own them. 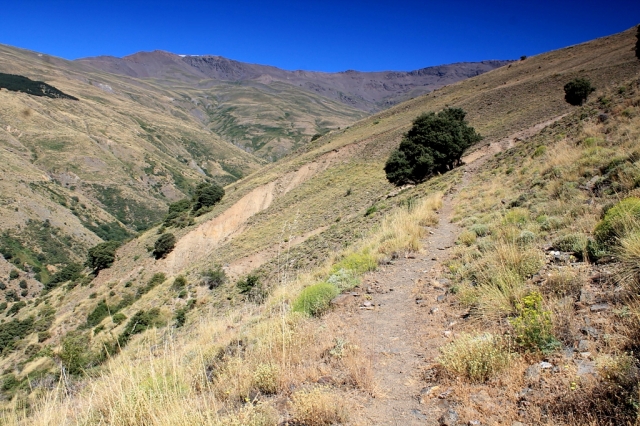 The ruins of the Cortijo Toril, the first of the three cortijos in the Toril valley

Beneath the floor of Cortijo Combate, cattle stir contentedly in a shady byre. Their body heat would probably render the place quite cosy during a winter’s night when wind howls through the mountains, though it’s not the sort of place I would bed down voluntarily if there was an alternative on offer. And another thing: it’s a long walk from La Cebadilla to milk a cow. What on earth are these beasts doing up here (altitude 1,890 metres)?

The Cortijo Combate – which translates as the cottage of combat. No one here today except me and some cows 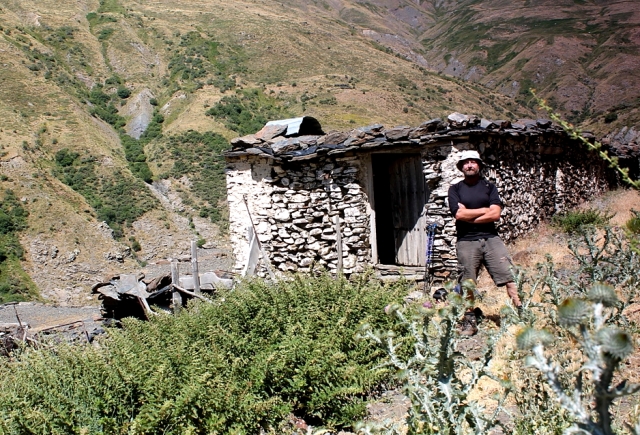 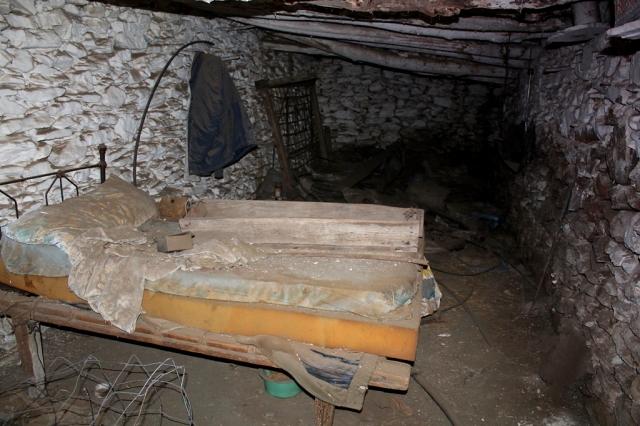 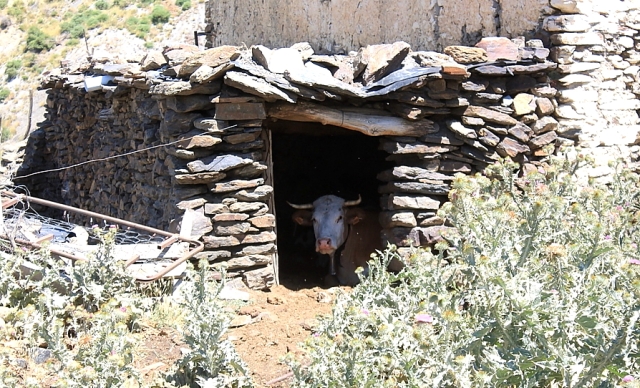 A few metres beyond Cortijo Combate my diminishing path is swallowed by a series of deep and ugly landslips. I have no desire to cross them, or bypass them above or below – either of which would require a great deal of effort – so I sit in the shade of a piny tree and make a meal of bread, cheese, tomatoes and fruit. A crisp white wine would go down nicely, thank you, but you can’t have everything.

Then I retrace my steps beneath an afternoon sun, through the Alpine meadows and shady woods where streams bubble between rocks. And as the sound of church bells drifts from Capileira many hundreds of metres below, I revisit a notion which surfaces occasionally on my mountain walks: that good paths, alluring paths, enchanting paths, invariably lead to wonderful places. It is certainly true on this occasion.

31 Responses to In the Valley of the Toril