The High and Mighty Mines of Lújar

LET’S recap. Five minutes ago I blundered into a herd of wild boar and seriously scared myself. That’s history, but if you’re interested you can read the account here. Now the clock is ticking. It’s 7.20am and a whole day lies ahead. My original excursion disrupted, I opt for Plan B – a long, hot trudge to the ancient mines of Sierra de Lújar, in the south of Spain. It turns out to be a Plan B with knobs on. And more wild animals . . .

Ancient and modern is a more appropriate description. Worked since Phoenician times for galena (the ore of lead), silver, and an assortment of associated minerals, and comprising about 145 kilometres of tunnels on a multitude of horizons, the mines of Sierra de Lújar closed in 1989 and were in a state of dereliction at the time of my first visit, back in 2009.

But the following year the mines reopened for the exploitation of fluorspar for use in the Basque steel industry. The highest productive workings lie at an altitude of 1,255 metres – 895 metres above the main road between Orgiva and the Andalucian coast. This presents the prospect of a hot and dusty ascent of just under 3,000ft.

It’s the equivalent of climbing Scafell Pike from Wasdale Head by the steepest route and repeating the last bit for good measure, while carrying three litres of water because Lújar is a dry mountain in a very dry environment. I’ve been caught out on the water front before and vowed never to be caught again, so three litres is a belt and braces quantity.

By the way, did you see what I did with the measurements? I’m using a mixture of metric and imperial. I’m ahead of the game here, in full anticipation of post-EU Britain reintroducing rods, perches, poles, chains, ells, palms and peppercorns. You people need to get your heads round all this stuff. And when the Tories re-adopt the Julian calendar that’s really going to mess up your holiday arrangements. Be prepared.

Plan B isn’t merely a visit to known places. Several months ago, through binoculars from the comfort of my house roof, I spotted a flat ledge in the centre of Lújar’s northern crags. It looks manmade and worth exploring. Also, things have changed since 2009. New tunnels have been blasted into the mountain, new roads carved and old tracks widened. But what I expect more than anything is that mighty Lújar remains a rocky wilderness separating the Sierra Nevada – Spain’s highest mountain range – from the Mediterranean, a wilderness rich in wildlife and peaceful, scented places. (Click pics for high-res versions)

The Miners’ Path has been in use since ancient times 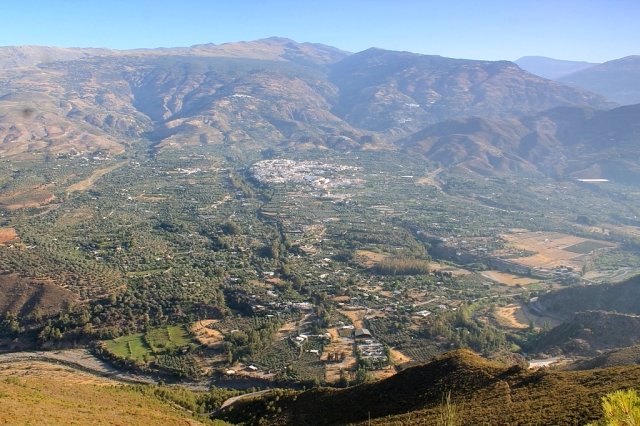 The town of Orgiva nestles on the slopes of the Sierra Nevada. During the heyday of the mines, the population was 9,000 – 3,000 more than today’s total. The blue mountain standing alone to the right of the picture is Mulhacen, which at 3,479 metres is mainland Spain’s highest peak 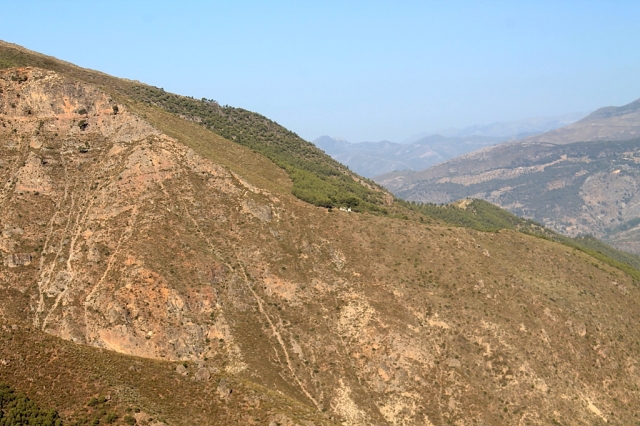 The tiny white farmstead on the ridge in the centre of the picture was to have been my destination for today, before I strayed into a herd of wild boar and revised my plans. Funny how things work out 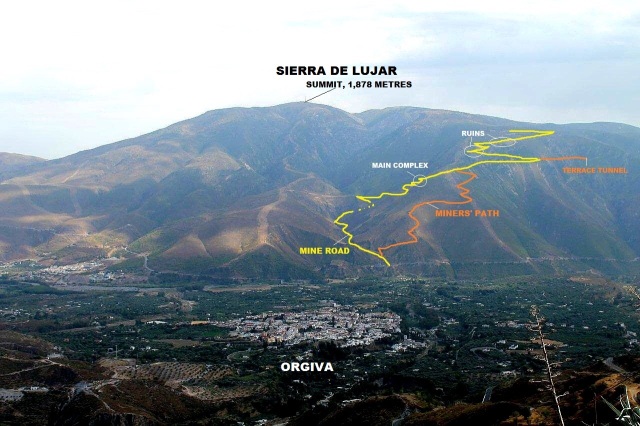 I follow the rough, steep and at times indistinct miners’ path up the front of the mountain. This ancient track, which is waymarked in places, is reputed to have been the original route to the mines. Phoenicians, Romans, Moors and mediaeval Christians trod this dust. Soon I am gazing down at the neighbouring ridge and the remote farmstead that was to have been my destination for today – before the wild boar played havoc with my plans. Another breathless slog up a few fathoms of steep ground and across several cubits of patchy scrubland and I’m standing on the modern mine road.

Soon I find a vague track that leads across the crags to the flat ledge I spied through binoculars. And yes, indeed, it is manmade – it’s a stone-built terrace leading to a tunnel, now long-abandoned. What a fantastic place to work. What an incredible, panoramic prospect from this lofty location. Did the workers appreciate their exceptionally wonderful circumstances? Perhaps the novelty wears off if you have to climb the mountain every day in blinding heat and winter squalls. 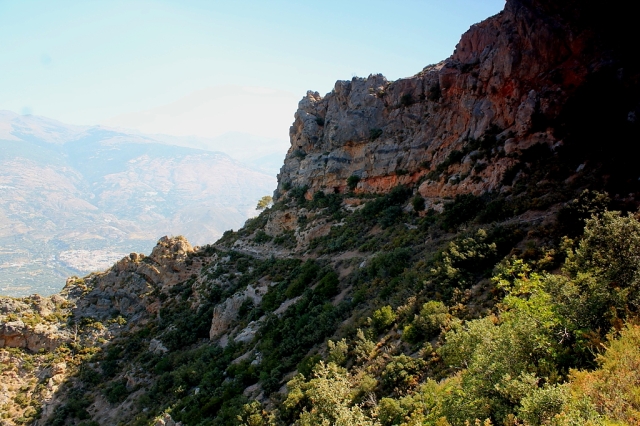 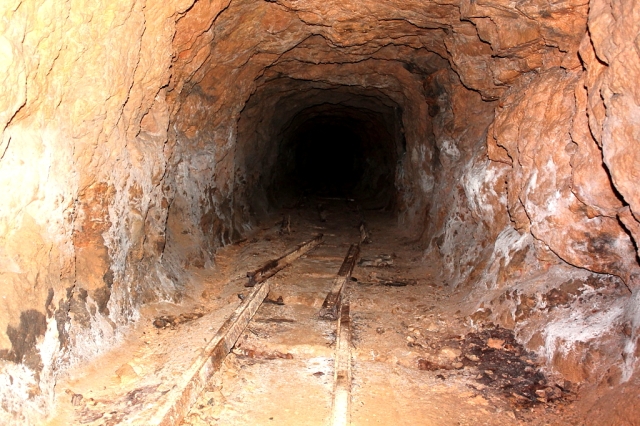 After 200 metres the tunnel ends in collapsed ground. Strange how so much wet mud can be found in such a dry environment 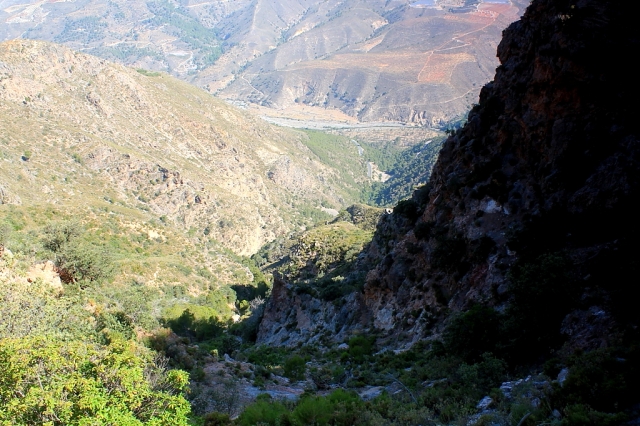 The view from the terrace down to the valley, with the Rio Gadalfeo winding across the picture and the main road just visible among the trees

Returning to the road, I pass tunnel after tunnel, all gated to bar the public from the mountain’s innards. Ruined buildings from previous eras stand open to the elements, shutters hanging on rusty hinges, wild mint and butterflies among the rubble. I have seen scenes like these before, among the slate quarries of northern Wales and the lead mines of the north Pennines; places where wealth has been won – by the few – while the many have been obliged to pack their goods and move on when fortune changes. It’s the same the whole world over. 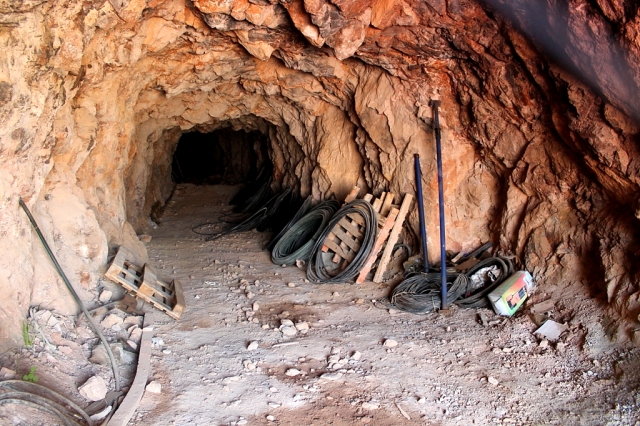 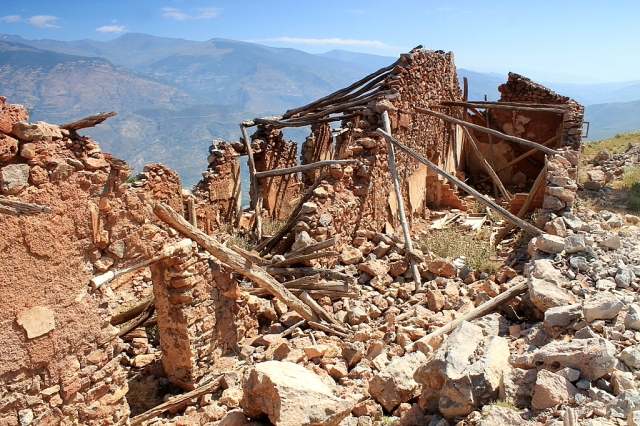 A core sample from a core drilling rig

An air shaft at the side of the mine road. How deep is anybody’s guess

The low structure on the right is a lavadero – a series of washing tubs for scrubbing your clothes. These communal washing facilities are common in Spanish villages. Looks like the miners had them as well 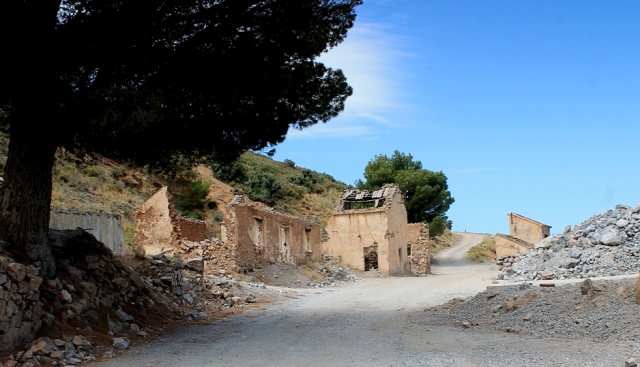 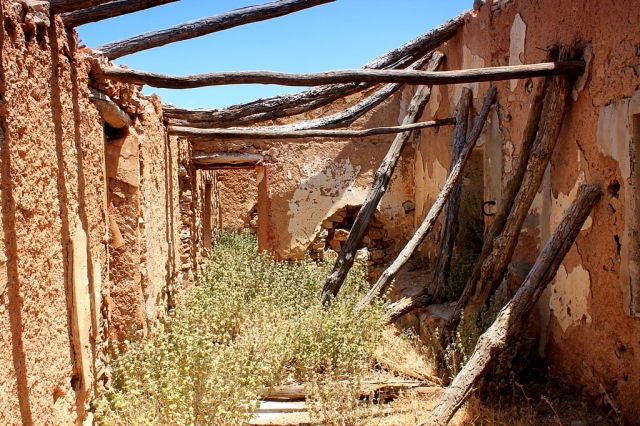 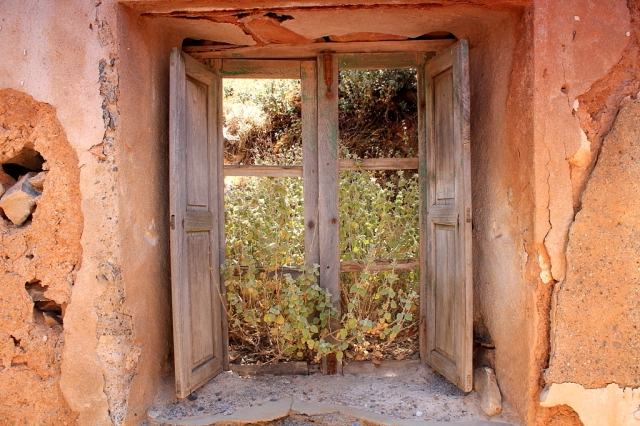 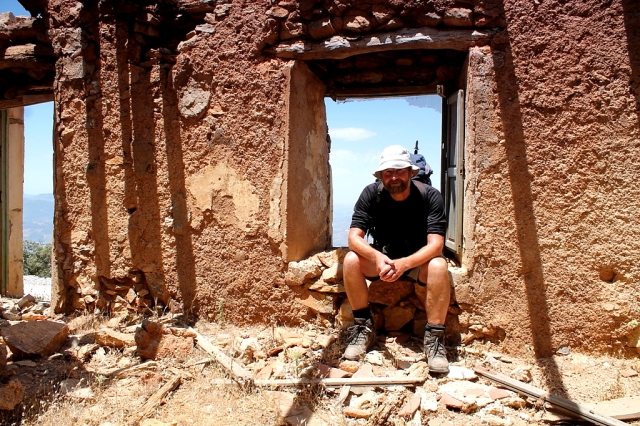 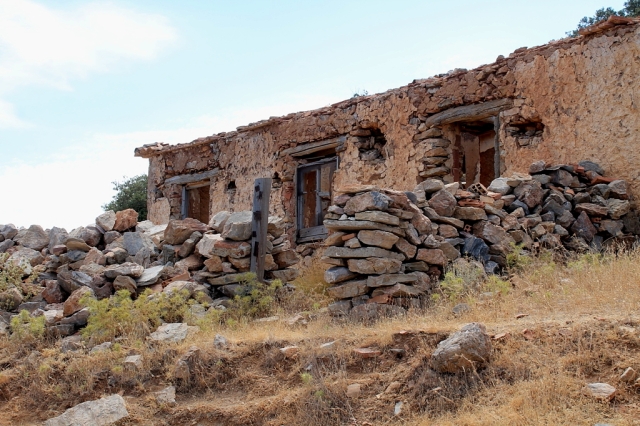 I was quite pleased to find this old core-boring rig. Peter Appleyard, of Torver, and myself spent several months using a similar rig to take core samples up at High Gawthwaite Quarry, and behind the Rightway and in the Deep Level at Burlington Slate Quarry, Kirkby-in-Furness, back in the mid-1980s, looking for fresh deposits of slate. The rig was borrowed from Honister Slate Mine but belonged to the Penrhyn company, in Wales, if I remember correctly. It was cold, wet work. Got some old slides somewhere

Slogging higher, beyond the upper reaches of the modern workings, I cross one the great shoulders of Sierra de Lújar to gaze down into the head of the neighbouring valley. More ancient mine-workings cling to its slopes – and on a scale I did not expect to see. This remote location, it appears, was once a thriving place. But it lies beyond the limits of today’s expedition. It’s mid-afternoon and I’ve only one litre of water left. That’s about seven gills, incidentally.

I follow the mine road down the mountain, passing the main office and workshop complex (an excitable mechanic prevents me entering) and a lorry being loaded with crushed mineral for its hair-raising journey to the main road. I watch with admiration as the driver embarks on his descent in a very low gear, the lorry’s suspension grating noisily.

Me, I’m content to walk in its wake, plodding through the almost-liquid dust and around the many hairpin bends in the afternoon sun, listening to birds singing and watching ibex flit among the shadows. Among the debris of industry the wildlife is thriving.

The main administrative and maintenance centre of the mine, where the laboratories and fitting shops are located. One of the main tunnels is situated behind the buildings 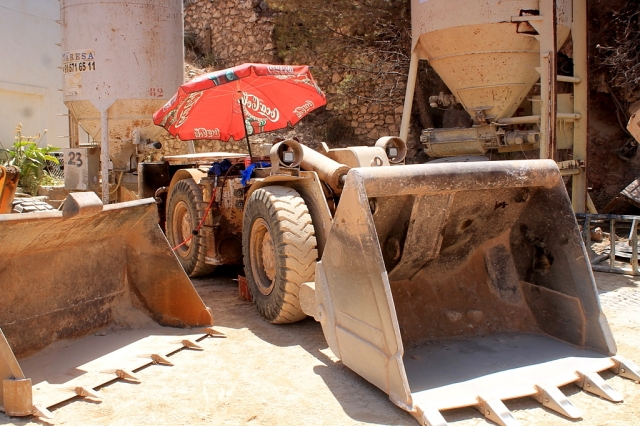 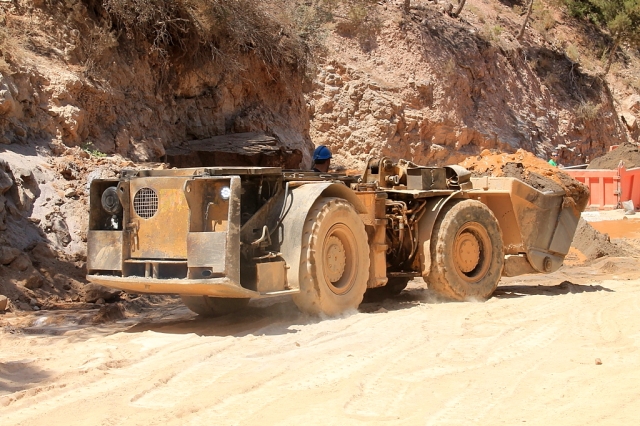 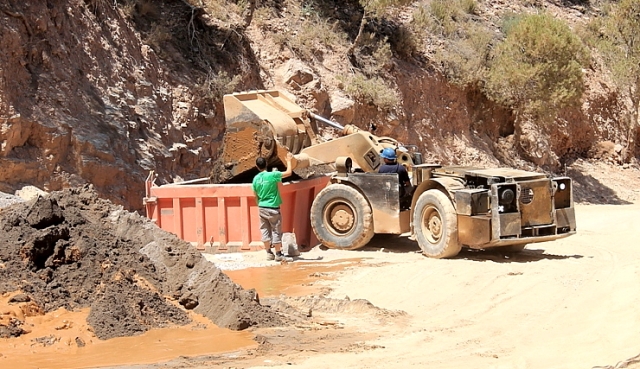 A scalopendra, crushed beneath the wheels of a vehicle. This centipede is a nasty piece of work and can deliver a really painful sting

And Lújar has lived up to all my expectations. It remains a wilderness despite man’s tamperings. Tonight I’ll sit on my roof and raise a glass to its toweringly majestic bulk. 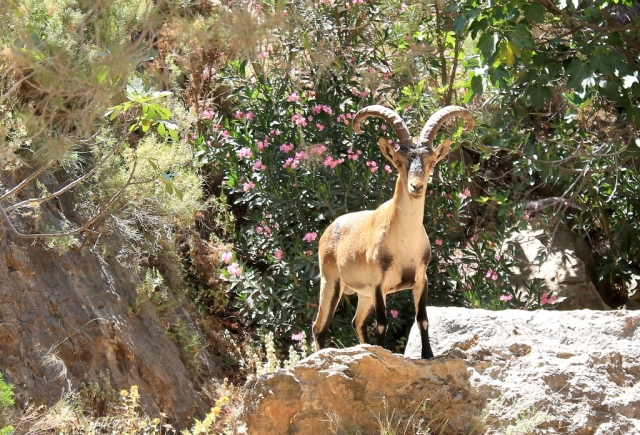 29 Responses to The High and Mighty Mines of Lújar