CONIVAL and Ben More Assynt are mountains with majesty. I read an article a long time ago about these northern giants glimpsed in the rays of the setting sun, and the quartzite stones on their summits glowing golden in the evening light. That captured my imagination. Sooner or later I had to climb them . . .

I’m camping at Badcaul on the shores of Little Loch Broom, just south of Ullapool. The campsite’s called Northern Lights but I haven’t seen any yet, despite spending several dark hours scanning the skies, accompanied by cans of McEwan’s Export. In a sort of compensatory gesture, the campsite owner – who comes from Hexham – has provided me with a detailed critique of the local chip shops. Fair’s fair.

It’s a long drive from Badcaul to my starting point at Inchnadamph. But this stretch of the A835 must rank as one of the most spectacular roads in the country, with views across the Minch to the Summer Isles, and the magnificent bulk of Ben More Coigach dominating the foreground. With glimpses of Stac Pollaidh, Suilven, Canisp and Quinag, it’s at times like these you realise there is much, much more to Scotland than 3,000ft Munros. This is the far North-West Highlands, and it’s wild and wonderful.

Inchnadamph is a magical name. It sounds like it should be in a poem, or perhaps one of those sentimental John Ford films starring Victor McLaglen and Maureen O’Hara. It means “Meadow of the Stags”, so I suppose that’s poetry enough.

My route today is taken from The Munros: Scottish Mountaineering Club Hillwalkers’ Guide, Section 16. I follow the route along the beautiful Gleann Dubh and am soon struggling up the bealach between Beinn an Fhurain and Conival. There’s a gentle spring wind and the sun’s on my face. It’s a perfect day in a perfect world. 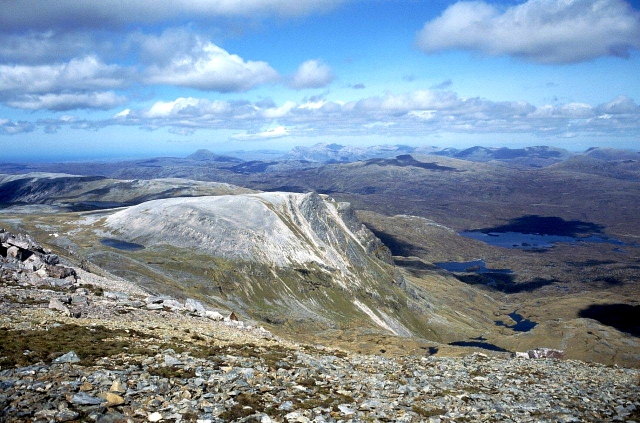 The guidebook advises me to head for Ben More Assynt’s South Top and make my descent to Dubh Loch Mor, returning to Inchnadamph across open moorland. The description is a masterpiece of understatement:

“The descent from the South Top, however, is much more likely to cause problems as the south-west face of this peak above Dubh Loch Mor is steep and craggy, and unless one returns along the ridges one has to descend to this loch.”

I pause on the crag above the loch, my toes projecting over the lip, scanning the near-vertical rock below for evidence of human activity – paths and body parts, that sort of thing. There is no evidence. I consult the guidebook again, just to confirm I’m in the right place. It turns out I am. I walk forwards and backwards along the top of the crag, searching for a route down other than launching myself into the sky like a booted Icarus. Eventually I give up and head back to the main summit. 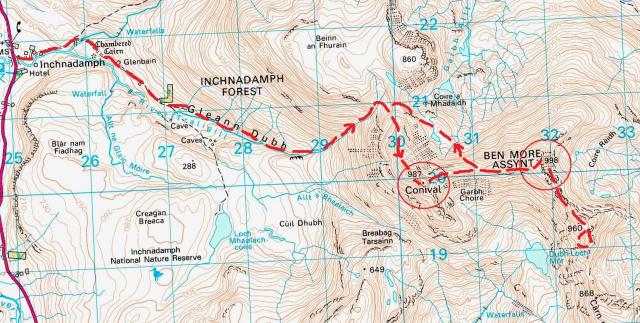 Determined to vary the homeward route, I drop down into Coire a’ Mhadaidh and spend an hour snoozing above the loch. This is a great place for a snooze. Then I rejoin my outward route at the bealach between Beinn an Fhurain and Conival and make my way in a burning afternoon sun to the pleasant hamlet of Inchnadamph. 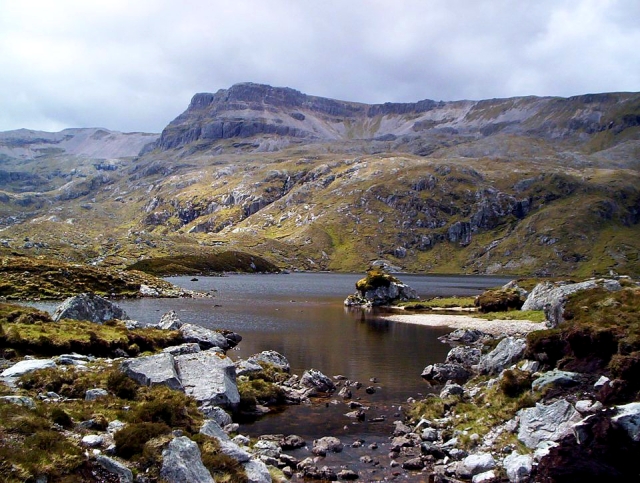 Loch Beallach a’ Mhadaich, taken a couple of years later while walking the Cape Wrath Trail

A day like this requires a suitable ending, and this is provided in the form of haddock and chips by the award-winning Seaforth Inn Fish and Chip Shop. There are few things more pleasant than sitting on a quayside, dangling your feet over the water as a golden sun sinks behind Ben More Coigach, while eating a fish supper lashed with salt and vinegar . . . and thinking: a few cans of McEwan’s and a flicker of Northern Lights will just add the final full-stop to this day.

Sleeping giants Conival and Ben More Assynt were climbed on May 12, 2004

FOOTNOTE:
I’VE since talked to other walkers who had trouble finding a route off Ben More Assynt’s South Top to Dubh Loch Mor and gave up. Any views on this, anyone?

51 Responses to Days Like This, No 17: Sleeping Giants of Assynt