The Glyders – And a Descent into Hell 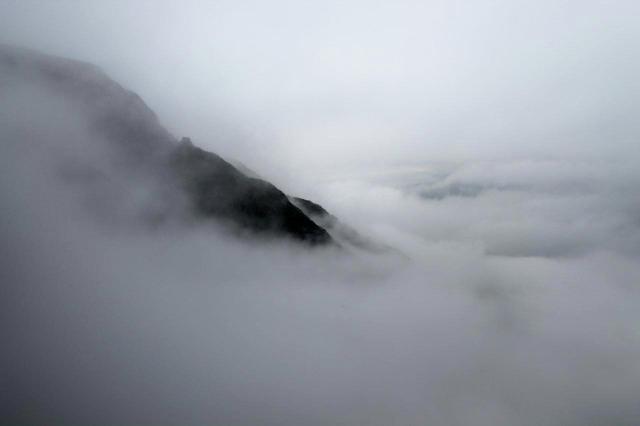 THE Glyders are two of the highest and most spectacular mountains in Snowdonia, and a traverse of the ridge between the peaks should be high on any walker’s agenda. It’s been on mine for decades, I’ve just never got round to it. By the way, do you know what it feels like to have your thumb sucked by a sheep? Bear with me . . .

Glyder bound, I leave the car park at Idwal Cottage and take a path up the fellside past the tranquil waters of Llyn Bochlwyd to Bwlch Tryfan, a high col that separates the rocky summit of Tryfan from the most easterly of the Glyders – Glyder Fach. (Click pictures for high-res versions) 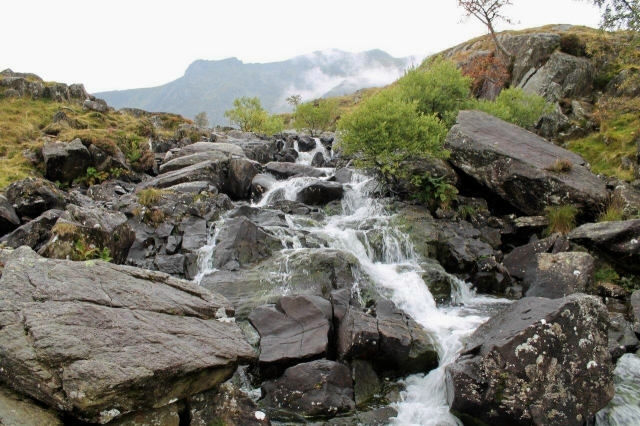 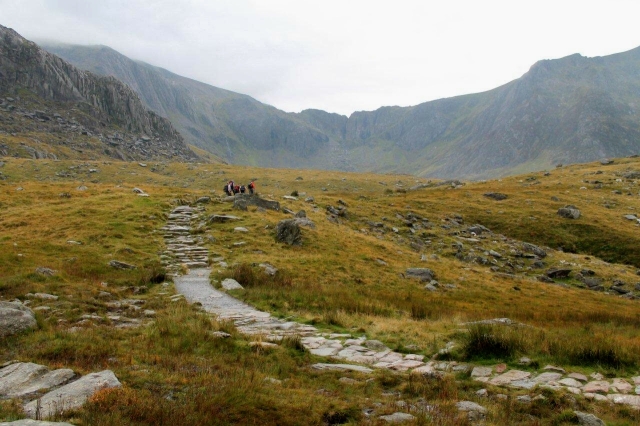 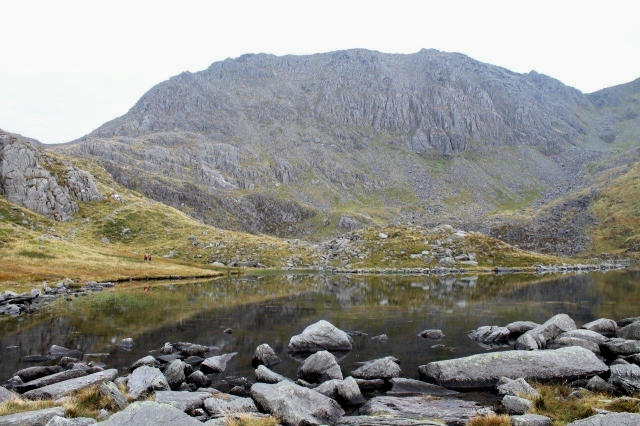 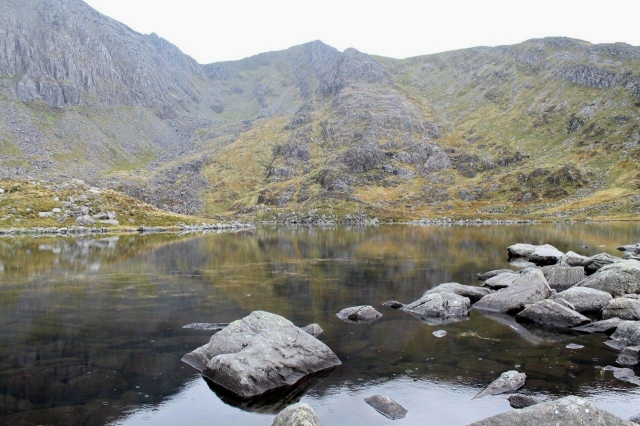 I must mention two things at this juncture: the weather and Tryfan. When I arose at 7am in my tent on the Swallow Falls Hotel campsite, just outside Betwys-y-Coed, damp clouds were scraping the treetops. By 9am the mist had cleared and only high clouds remained – promising a fine day’s walking.

As for Tryfan (pictured below), I had a vague plan to climb this massive rock sculpture by its south ridge, but on reaching Llyn Bochlwyd the mist and rain rolled in from nowhere, obscuring everything and ensuring all the scrambly routes to the summit were wet and greasy. The vague plan became so vague it evaporated. 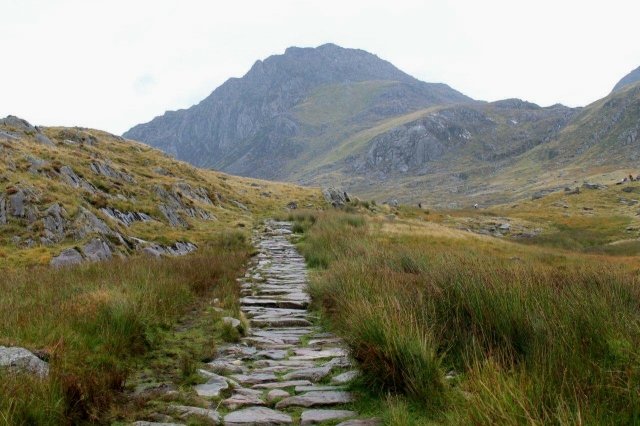 Back to the present. I’m sheltering from the clammy wind behind a wall on Bwlch Tryfan, and there’s a German couple and two elderly Welsh lads sheltering with me and we’re discussing which route to take in the mist.

Is that mean? I did become quite fluent in Polish once. Here’s a useful phrase to use at the end of a night out with your wife: Ta Pani za wszystko zapłaci. 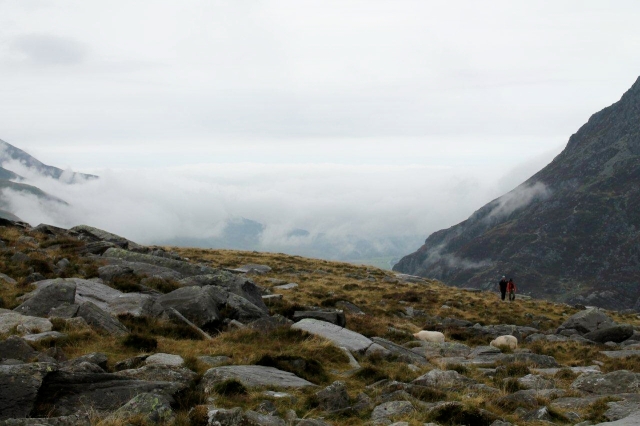 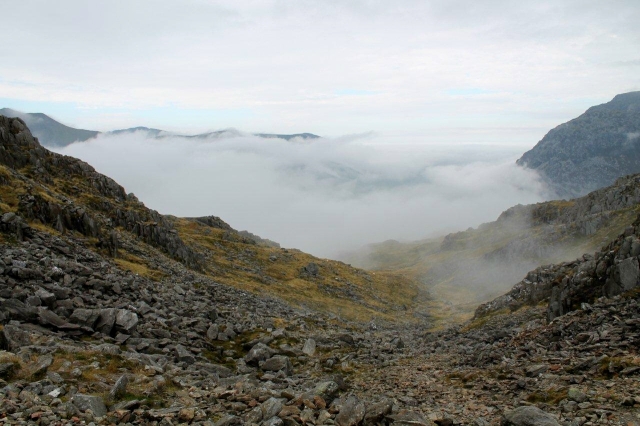 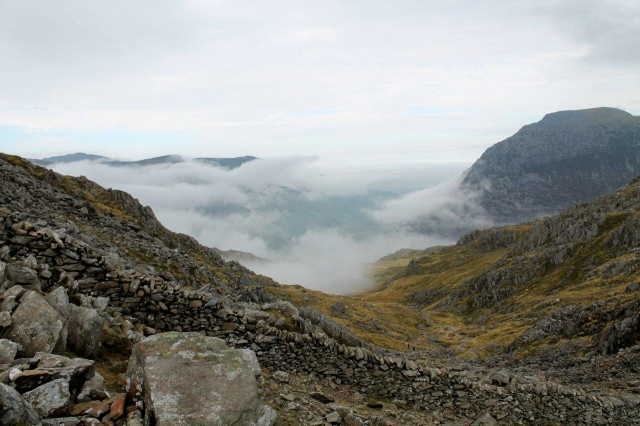 The old boys take a path skirting around the head of the next valley – Cwm Tryfan. The German couple intend to climb the steep screes beneath the descriptively named Bristly Ridge. This is the option I choose, and as I set off heavenwards the mist breaks to reveal a panorama of dark fells, and ragged clouds rolling along deep valleys many hundreds of feet below. It really is a wild and haunting scene, and one that takes me completely by surprise. 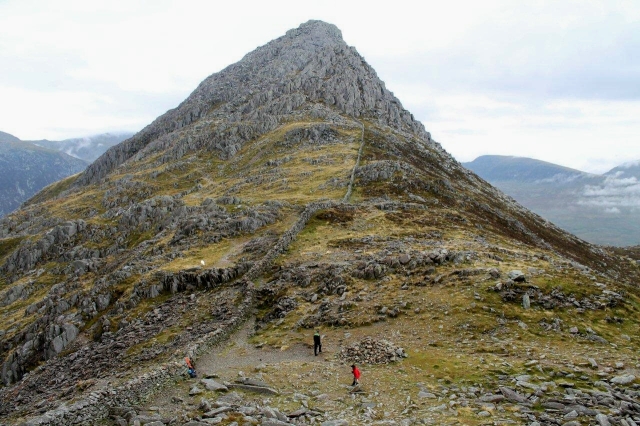 The zigzag path up the scree is steep and rough. I’m expecting a thigh-tearing, calf-burning struggle to the top and I’m not disappointed when I get one. The views back over Tryfan are tremendous (above). I pause frequently to savour them. Unlike the path up Bristly Ridge itself – which involves a certain amount of exposed scrambling – the scree route demands nothing expect brute force and determination. I can do both sometimes. 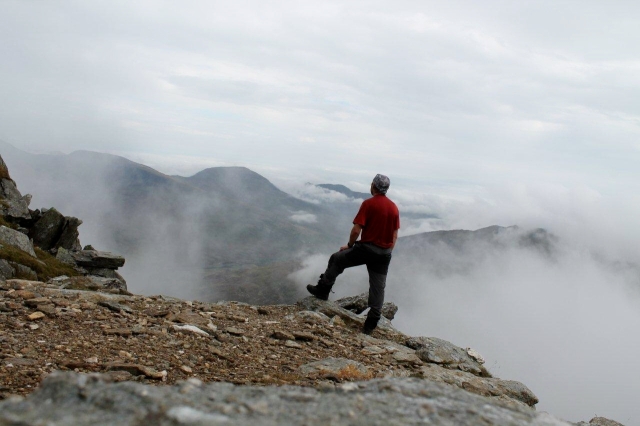 But when I reach the summit (994m, 3,261ft), a little bit grimy and panting like a friendly dog, the mist rolls in and that’s the end of the views for a couple of hours. So let me tell you about the thumb-sucking sheep of Glyder Fach. 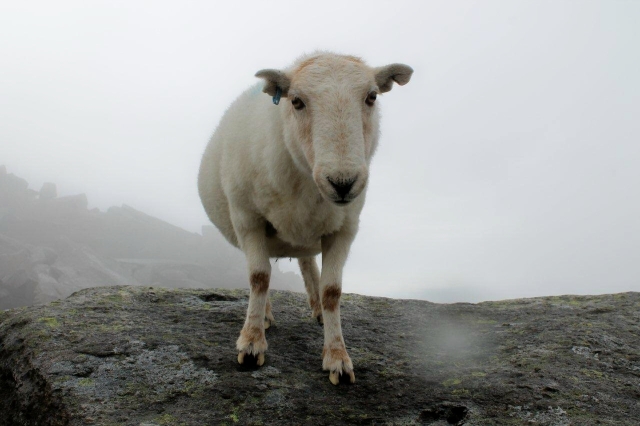 The trouble with the English language – and I don’t know whether German and Welsh have the same problem – is that “sheep” is both singular and plural, like fish and grouse. So to dispel any misconceptions that may have arisen, only one sheep appears to have a habit of sucking thumbs on the summit of Glyder Fach. For all I know it might well be a herd instinct thing, but I have seen no evidence to suggest this is the case.

I’m sitting on a rock beneath the rather ungainly pile of stones that appears to be the summit, eating a ham bun with lashings of English mustard, and this sheep saunters up as bold as brass and attempts to stare me out. It really does. It puts its face right up to mine – not in an arrogant or a threatening way – and just looks at me. If it did that in a Darlington pub it would get nutted. But we’re on a Welsh mountain and the sheep is on home turf, so I humour it.

I stick my hand out to pat its nose, because I can’t think of anything more appropriate to do – and it sucks my thumb. This is not an unpleasant experience. I had no idea how soft and warm a sheep’s tongue can be. Perhaps some of you know this already. Let’s move on. 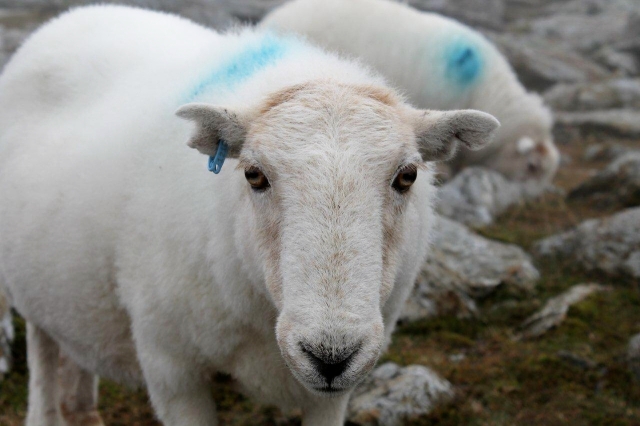 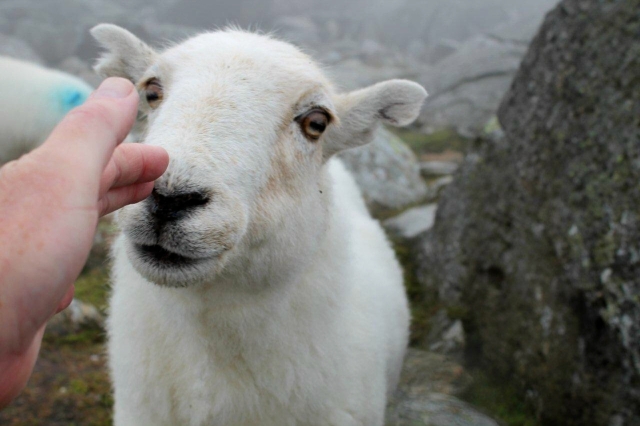 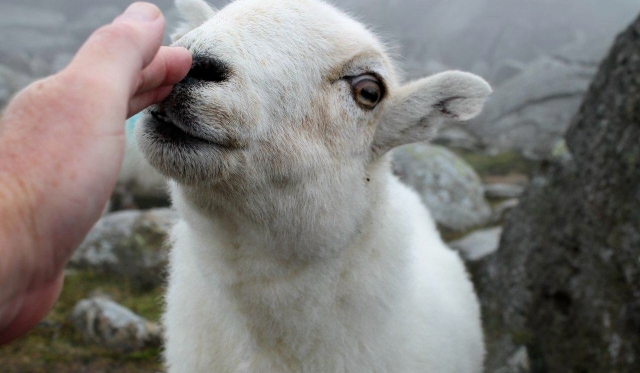 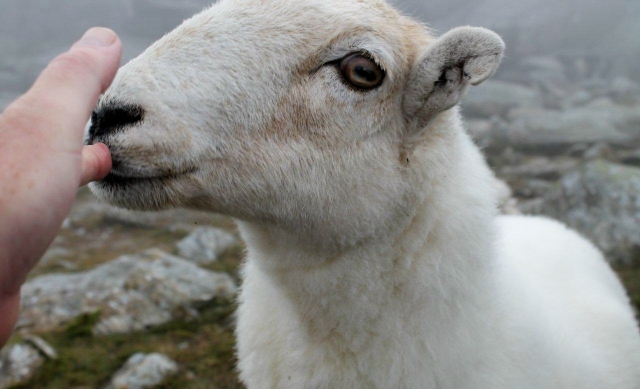 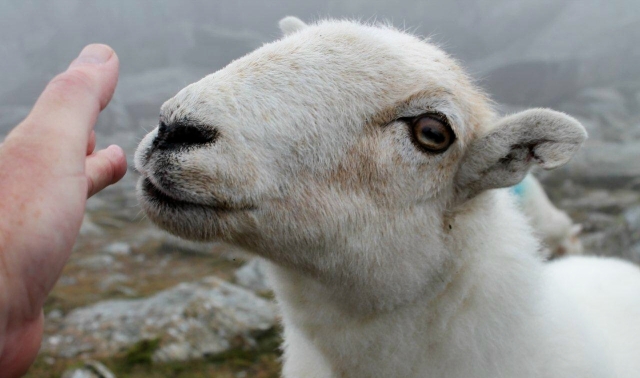 The mist is down well and proper when I resume my walk along the connecting ridge to Glyder Fawr. I check my bearings at regular intervals. This mist is pretty annoying because I was expecting spectacular views along this section of the walk. But such is life. Disappointment is an old friend when you’ve supported Barrow since childhood. 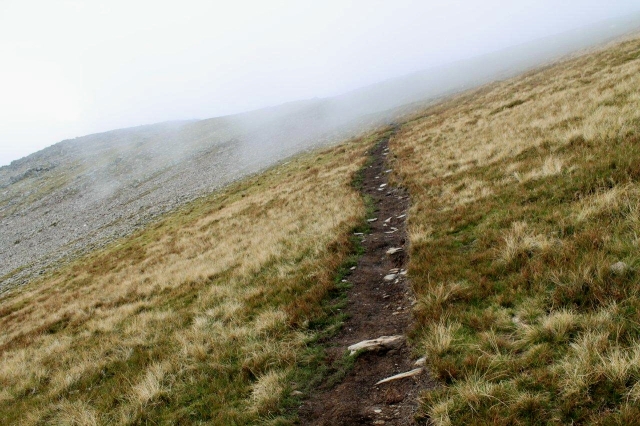 The summit of Glyder Fawr (1,001m, 3,284ft) is a bit of an anti-climax – it’s just a heap of rocks at the end of the ridge, standing fuzzy grey in a landscape of fuzzy grey. By now I’m yearning for views and the spice of adventure – and all that remains is a steep descent to the valley through something called the Devil’s Kitchen. 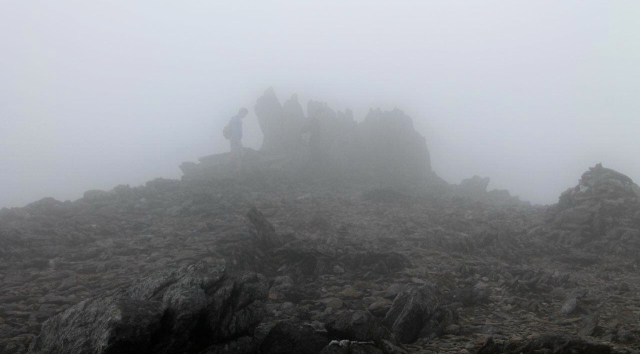 I’ve reached a stage in my life where geographical features attributed to the Devil no longer stir my curiosity. There are Devil’s Elbows all over the place. There’s a mountain in the Cairngorms called the Devil’s Point, which was known as something less prosaic until Queen Victoria visited the area and it was hastily renamed to save her blushes. And as for the Devil’s Punchbowl, isn’t this indicative of the type of person who had the influence and arrogance to name these places? How many peasants had punchbowls on the sideboard while the hens and pigs scratched under the table? Devil’s Punchbowl, my backside. So what’s this Devil’s Kitchen?

I descend a rough and rocky gulley between high crags, and the mist tears itself apart with perfect timing to reveal a steep funnel – down which the path plummets – surrounded by unsurpassable mountain scenery. This must be the Devil’s Kitchen. The mist rolls in again, then parts almost as swiftly. I am treated to glimpses of phenomenal rock architecture that swoops down in folded and broken crags to the dark waters of Llyn Idwal. 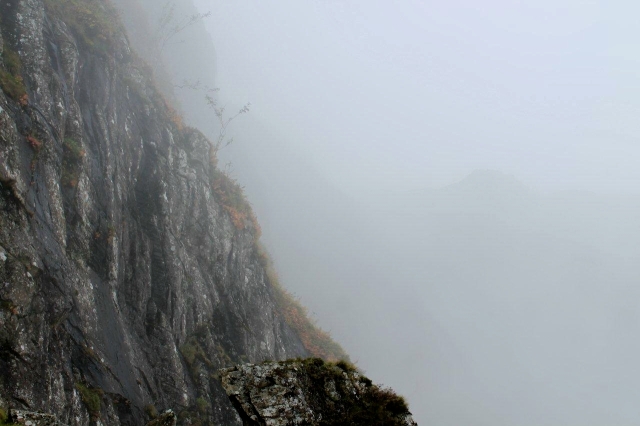 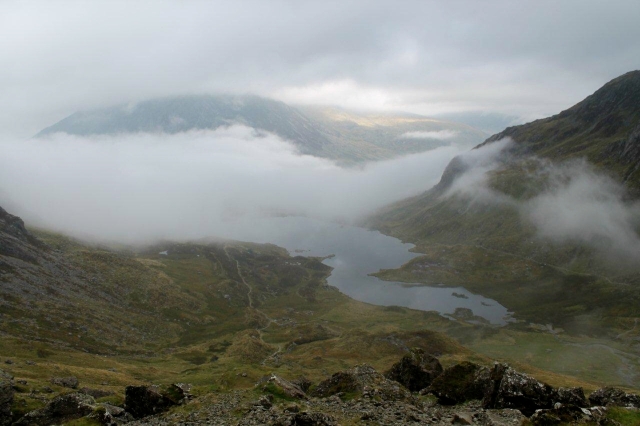 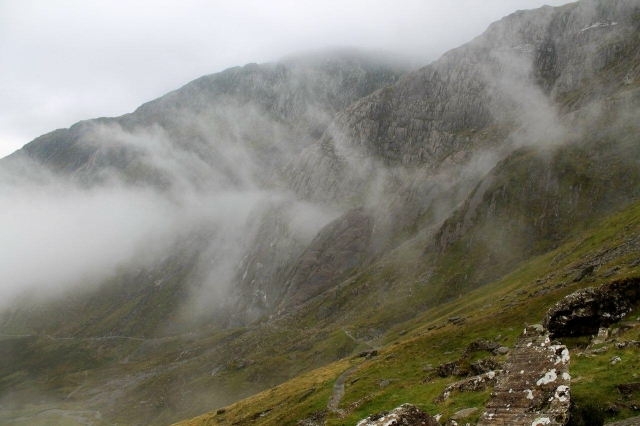 I apologise to the Devil. This really is a hell of a place. The sweeping clouds emphasise the drama and add a sense of menace. Vertical rock faces; gushing waterfalls; the moan of the wind; and a seemingly endless flight of crude stone stairs descending into the earth and taking me nearer to the Devil with every step – it’s all there in this gigantic amphitheatre. This is what mountain walking is all about. 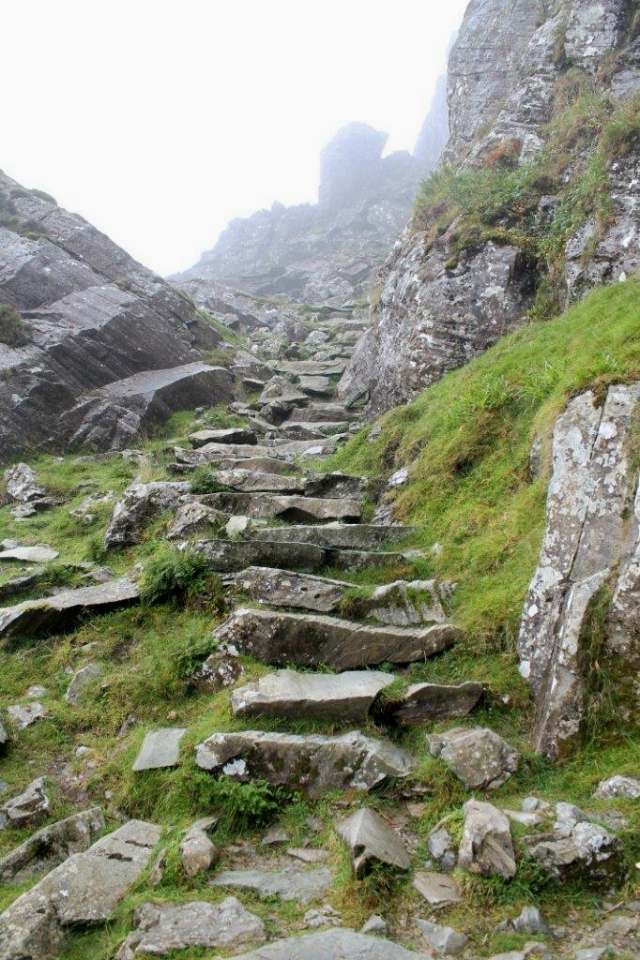 Later, after the sun has gone down, I’m sitting in a corner of the Swallow Falls bar when I hear two farmers discussing local legends. One draws a sharp breath as he recounts a tale of the Devil wandering through the mists of the high Glyders.

Apparently, the Devil appears in the guise of a sheep and peers into the eyes of the feckless to devour their thoughts, leaving their minds disturbed and their lives blighted by drink. It’s not a common occurrence, but it happens. 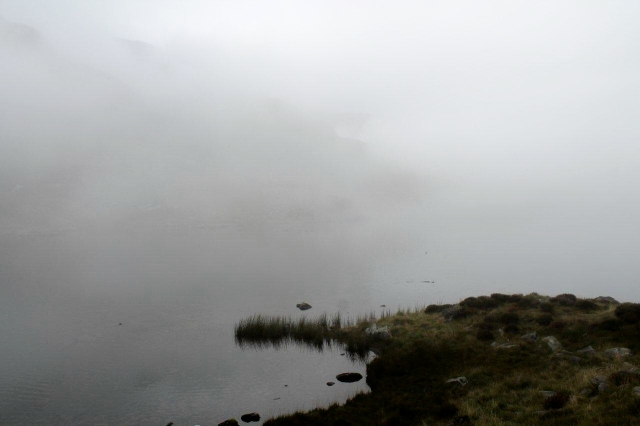 28 Responses to The Glyders – And a Descent into Hell