LOTS of things are happening – almost too many to relate. A cow is about to give birth in the field behind the Braemar campsite. I know this because Ronnie’s wife has just told me. Ronnie is the head campsite man. He’s one of those blokes who reminds you of someone you know, but just can’t put your finger on – like a long-forgotten Glaswegian electrician you worked with in a shipyard, or perhaps someone who had a bit part in Taggart.

Ronnie and his wife are counting tents, making sure no one has slipped in under the radar. The wife tells me about the cow, which is making uncomfortable noises. It’s just getting dark and the cow begins to lumber over the hill looking for somewhere more restful, so Ronnie and his wife wander after it and I repair to my tent, the cow’s mournful bellows still aching through the glen. Apparently, as well as running the campsite, Ronnie and his wife have a sideline in bovine midwifery. 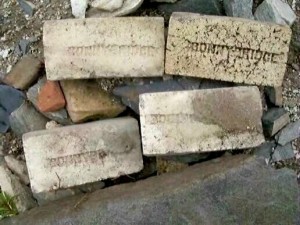 And oh, there is a bright yellow house-brick in the bottom of my rucksack which I lugged ten miles from the ruined Geldie Lodge. More about this later.

Highlight of the day, though, in a day not short of interesting turns, is dinner at the Hungry Highlander in Braemar. There I sit at the only table in this first-rate fish shop, with a tray of haddock and chips and a steaming cardboard cup of black tea. The tea looks very unappetising but tastes surprisingly good. The chips are done to a turn as proper chips should be, and the fish – which must be a foot long – is a joy to the eye, the nose and the palate. In fact, the only one of my five senses the fish does not titillate is my hearing, but this is amply compensated by the two women working the fryer whose conversation is sufficiently entertaining. They are quite easy on the eye, too.

So I enter the Hungry Highlander smelling of peat bogs, wet clothing, sweat and God knows what else, and emerge smelling like a deep-fat fryer. God knows what those two women smell like at the end of a hot night. But as far as Scottish fish shops go – to pick up the strand of a recurrent fish shop theme – the Hungry Highlander has the McEff seal of approval and rates alongside the Ullapool chippie, the Aviemore chippie, the Killin chip van and Hector’s Plaice at Kyle of Lochalsh. But it does not, I’m afraid to say, stand shoalder to shoalder (heh heh) with that pinnacle of gastronomic and atmospheric perfection, Nico’s fish emporium in Fort William. Sorry Hungry Highlander, you are a worthy runner-up and will always have a special plaice in my heart (yeh, yeh, I know). 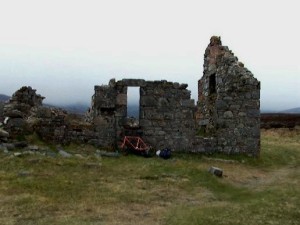 Like I said, it’s been a full day and it started at 7am. It’s a good ten miles to Geldie Lodge, pictured left, from the public road at Linn of Dee, and I spend a pleasant hour-and-a-half cycling up the rough track to the ruins. Like Altanour Lodge in Glen Eye, just two or three glens away, it is a ruin of what must once have been an impressive stone building – the sort Queen Victoria visited on her many sojourns to these parts. I root around in the ruins and against one wall discover the remains of a cast-iron kitchen range. There is also a heap of yellow bricks with Bonnybridge embossed on them. They would look good integrated in my planned patio of rare and interesting bricks, but not much chance of that. 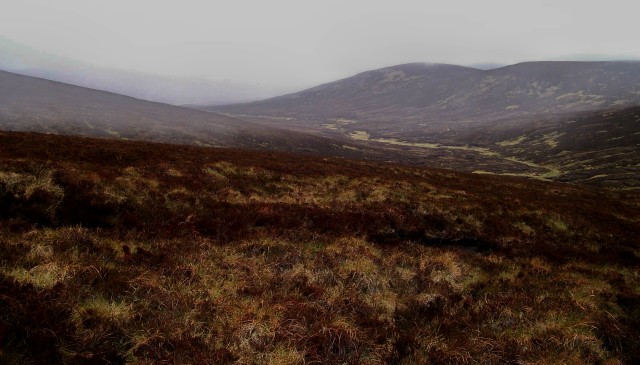 Carn an Fhidhleir – just before things get wet

As I root through the social wreckage of a forgotten era, the cloud closes in. Great black curtains descend on the high Cairngorm peaks to the north. My two Munros for the day – Carn an Fhidhleir and An Sgarsoch – have wet-looking blankets rolling over them from the west.

Now here’s what I’m going to do. Because I’m fed up of writing, and have jotted down the most interesting points of the day, all I shall say is that I climbed my twin peaks in howling wind and rain, with mist that came and went but mostly came, and got soaked through to the inner layers. I hate to leave it as brief as this because Carn an Fhidhleir and An Sgarsoch are fine mountains and worthy of a more eloquent description – but I hardly saw a thing.

What I will say is I enjoyed every minute of it. I enjoyed the challenge of navigating in the mist, and the anticipation of whether the clouds were going to lift

or not. I enjoyed the uncertainty of not knowing for sure I was on the right course, which I suppose reveals a considerable lack of self-confidence. Most of all I enjoyed the rain, blasting in on a ripping wind. There is something therapeutic about walking in the rain – even when it is whipping against your body. It clatters on your hood, strafes your arms and legs – but inside your waterproofs you remain warm, dryish, and curiously content.

So, back in the rain-lashed ruins of Geldie Lodge I pick out a suitable bright yellow Bonnybridge brick for my patio and place it in the bottom of my sack. Do you know how much a typical house-brick weighs? I can tell you because I weighed one once when calculating how many I could stack in the back of the car without rupturing the suspension. Sixty bricks equals three fat ladies perched on the back seat. So a single brick equals one-twentieth of a fat lady. That’s a hell of a thing to cart ten miles along a rough track in the bottom of your sack. One twentieth of a fat lady must be the best part of a lower leg.

And here’s some more interesting information:

By the way, it’s dark and I’m full of fish supper and Famous Grouse. And Ronnie’s wife says the cow and calf are doing fine.

1 Response to The Yellow Brick Road to Geldie Lodge