CURRY and rice cooked on a camping stove. Floury roll to wipe the billy. A can of McEwan’s to ease things down. McEwan’s – what does that remind me of? El Kabad was the place where I came face to face with Abdul la BulBul Emir . . . Ah, just the man, can you open this can? Gad, McEwan’s, the best buy in beer (They don’t make adverts like that any more. Just as well, probably).

I’m sitting on a collapsible stool I rescued from the allotment, writing my journal – writing these words – in glorious evening sunshine with mountains standing blue in the hazy distance beyond Loch Duich. Birds are singing on the Morvich campsite and the tree behind my tent is white with May blossom. It really is the most perfect evening. There is even a warm breeze to keep the midges at bay.

[Must break off here to mention that a Belgian couple have just arrived back at their tent and the chap has a bagpipe chanter on which he is playing A Scottish Soldier with quite a degree of professionalism. I start mouthing the words involuntarily. “There wis a sodjer . . .”]

So let’s start the journal. Up at 7.15am, and with the dew still on the grass I’m standing above the banks of Loch Quoich, beneath the shoulder of Gleouraich. This mountain and its sister, Spidean Mialach – to which it is joined by an umbilical ridge – have been on my list since my first visit to Kintail back in 2003. Actually, come to think of it, my first visit was in 1967 in the back of a primrose yellow Anglia Estate – registration HEO 956 – with my father waving an arm out of the window towards the mist-clad mountains and saying: “The Five Sisters of Kintail,” with the sort of vague authority that adults use to impress children when really they haven’t a clue what they’re talking about. Funny how these things stick in your mind.

So off I slog up this zigzagging stalker’s path to the crest of a ridge. The wind’s howling up from the valley, and I feel like I’m gliding. I could leap into the wind quite effortlessly and soar above Loch Quoich and out towards Knoydart. Like a bloody eagle.

ti-talented. I really should have more admiration for Belgians. Or perhaps he’s Scottish and I’ve been fooled by the foreign number plate on their car. What’s the most likely scenario: a Belgian in Scotland playing a Scottish chanter and speaking with a broad Scottish accent, or a Scotsman in Scotland playing a traditional Scottish instrument but driving a car with a Belgian number plate? The first option, obviously. And now he’s playing a lament.]

It’s cold on the top of Gleouraich, with grey clouds scudding in from the east and a look of rain. While sheltering behind the summit cairn I receive a text from my wife bearing news that my cucumber plants have died. Bugger. But the views along Loch Quoich to Knoydart are uplifting, and . . .

[Scotland the Brave now. I suppose it was inevitable.]

. . . despite the haze I can see for miles. Eastwards, I behold the Cluanie Ridge, with the Five Sisters of Kintail behind, and that big black bugger, Sgurr nan Ceathreamhnan, behind the sisters.

[Hieland Laddie. Can’t stop my foot tapping. He knows all the good tunes, this Belgian. Christ, he’ll be painting his face blue and crying “Freedom” before the night’s out.]

Spidean Mialach lies more than two miles to the south along a rocky, rubbly ridge. After several false tops, up which I struggle with a dodgy right knee that’s been swelling up for the past two days, I arrive on the summit of my final Munro.

The umbilical ridge, with Spidean Mialach in the far distance 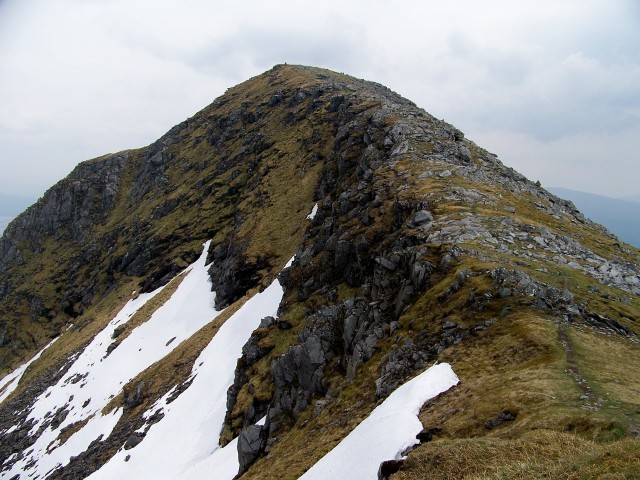 Here’s something worthy of note. On the way down the mountain I find a meadow pipit’s nest in which there are four eggs (which I am careful not to disturb. Alternatively, it could be a skylark’s nest. They are not easy to tell apart). This is the sixth such nest I have found this week. The birds are daft. They see me coming and flit off evasively, which catches my eye every time. If they just sat still on their eggs, no one would be any the wiser.

Another interesting point is the amount of bog wood on the lower slopes of Spidean Mialach. In every peat sike there are great bleached stumps and tangled roots. There must have been a hell of a primeval forest here at one time. Good place for a bothy, with all this free and limitless fuel around. And down by the road and nearly all the way along it are acres and acres of rhododendrons – all in flower. One would think one was in India and about to take tiffin. Or perhaps Belgium.

That’s everything written up. Now it’s time for bed. But with Tintin still blowing his chanter [Braes of Balquhidder] I might get the whisky bottle out instead. And then the blue paint.