A Cook’s Tour of the Cleveland Hills 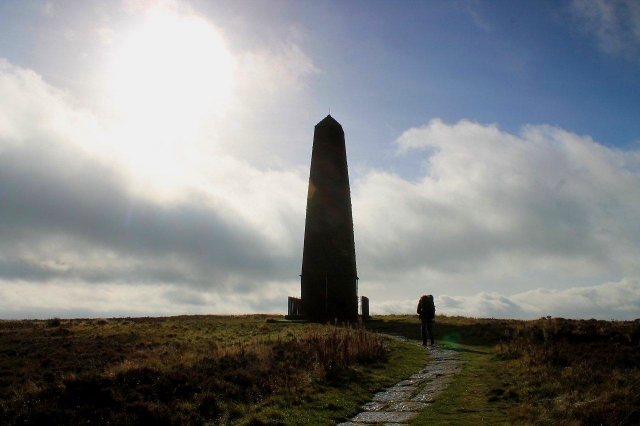 CAPTAIN James Cook is one of Britain’s most celebrated maritime heroes. Born to lowly farming folk in the Teesside village of Marton, his destiny lay not in farming – or shopkeeping, to which he was briefly apprenticed – but as a seaman and navigator who discovered new lands, charted unknown waters, and claimed the continent of Australia for George III before being slain by angry natives on Hawaii. So proud were the people of Teesside and North Yorkshire of their sailor son that they erected a monument to honour his achievements. It stands on a windy ridge of the Cleveland Hills and offers panoramic views across the farmlands of Cook’s childhood. The monument is the first port of call on today’s walk.

I feel slightly humble writing this. I’ve been delaying this walk all week because the weather has been wet and windy. Would Cook, a man whose reputation was founded on sailing into the unknown and in extreme conditions, and whose voyages took him into treacherous Arctic waters, have been deterred by a few autumn showers? Exactly . . .

My walk begins in Kildale. It’s a pleasant village a few miles from Great Ayton, to where the Cook family moved (to Aireyholme Farm) when James was a boy. Kildale stands on the 110-mile Cleveland Way National Trail. There is an excellent camping barn at Park Farm, on the outskirts of the village, which I can thoroughly recommend, having spent a night there about 12 years ago when I walked the trail. It is owned by a Mr and Mrs Cook. Is that too many Cooks for one article?

The village of Kildale, in the Cleveland Hills 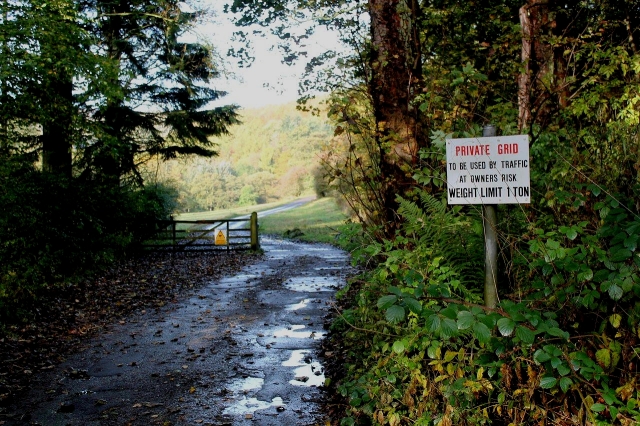 The Tories will privatise anything for a couple of quid. Private cattle grids. Whatever next?

I set off through the village and into the woodlands of Coate Moor, following the Cleveland Way to the foot of Captain Cook’s Monument on Easby Moor. Dark clouds gather on the southern horizon, but there are patches of blue – enough to make a sailor’s shirt, as my wife would say. It’s windy old weather, stormy old weather. When the wind blows it blasts through the heather.

Cook remains a colossus among nautical heroes and one of Britain’s most renowned explorers. His voyages rolled back the frontiers of knowledge and played a leading role in shaping the world we have come to know. He is Teesside’s most famous son – and a good thing too otherwise the title would fall to Roy Chubby Brown or Paul Daniels. 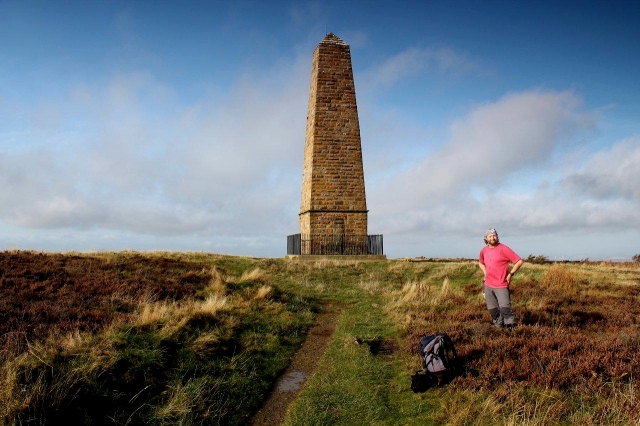 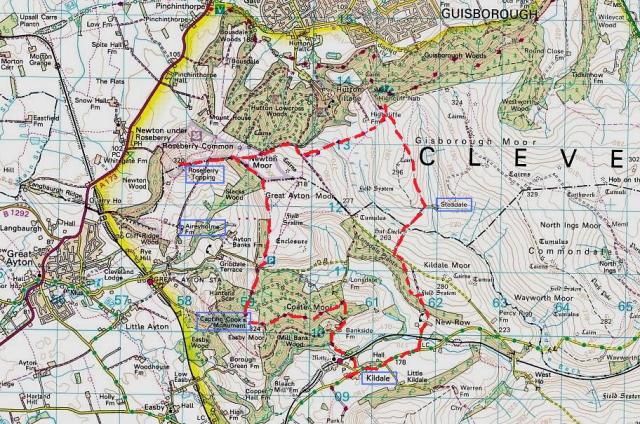 Leaving the monument I head north along the Cleveland Way. My next target is Roseberry Topping, which is as resonant to Teesside as Table Mountain is to Capetown and the Matterhorn to Zermatt. But before I set foot on its slopes I meet a 73-year-old woman walking along the escarpment.

We broach several subjects in our short though illuminating conversation, the most significant being the ageing process and how it should be managed. She intends to walk the hills until she can walk no more, she tells me – while waving a trekking pole in a resolute manner. She has just recovered from an operation, but that will not deter her. Walking keeps her fit and active, and that’s how she intends to remain. I bid her good day and wander on impressed and sort of reassured.

Side view of Roseberry Topping 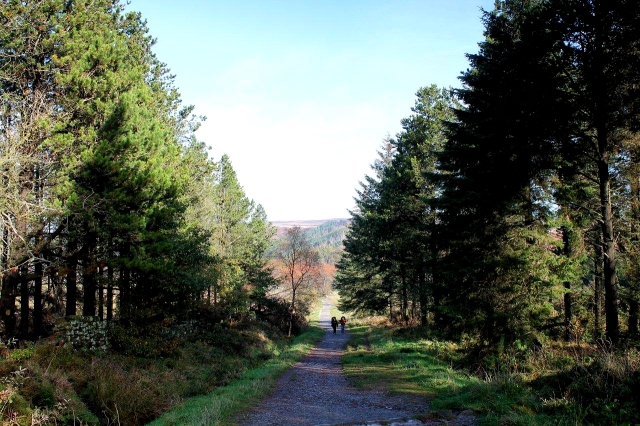 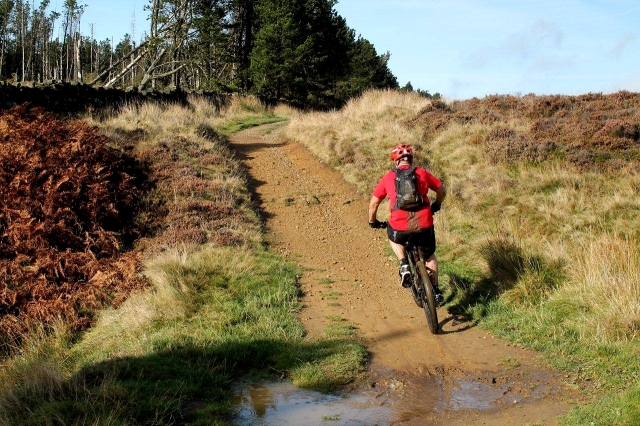 Roseberry Topping has been described as “Teesside’s miniature Matterhorn”. This is a tag I find depressing and a little impertinent. Having stood in the mountains above Zermatt and gazed up in incredulity at the magnificence of the Matterhorn, I can honestly say I can see no resemblance whatsoever except that one is very high and pointed and the other very low and slightly pointed. I will leave it at that. Neither do I intend to blunder into comparisons between Zermatt and Middlesbrough. However, there might be some mileage in Paul Daniels and William Tell. Anyone got an apple?

That’s not to say Roseberry Topping is without its charms or delights. At 1,049ft (450m), and with its distinctive “mountain” shape, it is a landmark for miles around and a much-loved and familiar symbol of the area. It also possesses the most fantastically rocky summit. Immense sandstone blocks and slabs crown the hill, which falls away steeply on all sides. Apparently, it takes its name from the Viking god Odin, and not roses or berries as might be assumed. This is what Wikipedia has to say:

Roseberry Topping is one of only a handful of known pagan names in England, being named after the Norse god Odin and paralleled by the Old English name Wodnesberg, found for example in Woodnesborough. The name changed successively to Othensberg, Ohenseberg, Ounsberry and Ouesberry before finally settling on Roseberry. “Topping” is a Yorkshire dialect derivation of Old English topp, ‘top (of a hill)’. The naming of the hill may thus fit a well-established pattern in Continental Europe of hills and mountains being named after Odin or the Germanic equivalent, Wodan. 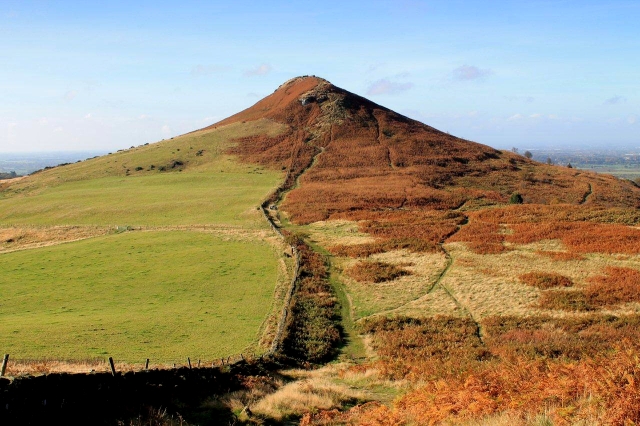 On the crown of Roseberry Topping sits an old man who tells me many wise things. It’s tempting to say he has one eye, a large hat, and a raven on his shoulder – but I did an Odin encounter in a previous post and to embark on another would be stretching things. This man has two eyes, he’s bald, and he’s from ’Uddersfield. No ravens. But he tells me he’s 70 and still going strong.

I tell him about my conversation with the 73-year-old woman on the escarpment. That’s nowt, he says. His sister is 80 and still teaching tap-dancing lessons. And his brother-in-law, who has always been a fitness fanatic, became a boxing coach at the age of 76.

He intends to keep walking until he drops, he says. I’m all for this positive approach to ageing, but it occurs to me that one day soon I shall venture onto the fells and find lots of dead pensioners lying about the place untidily. Still, it’ll make a good post. 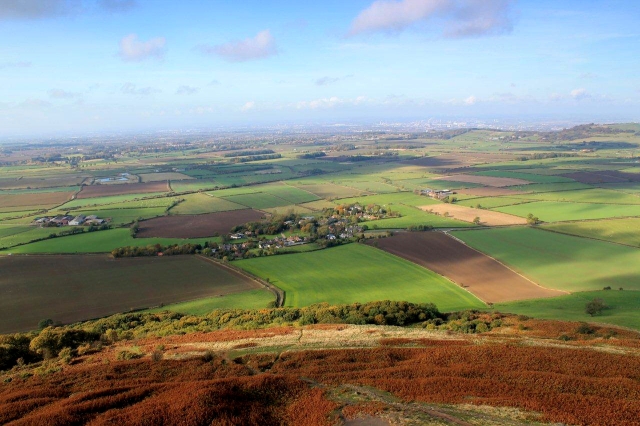 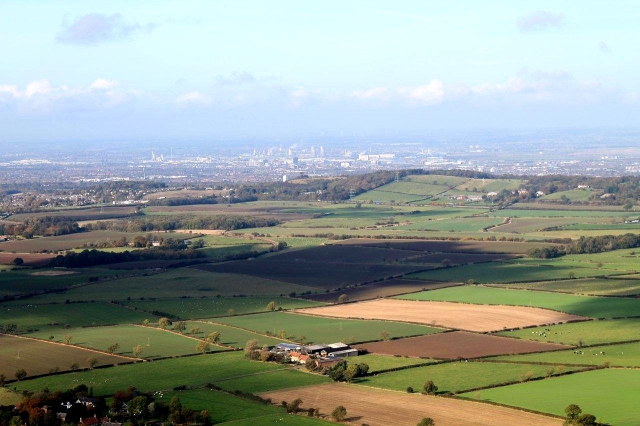 Which reminds me of a tale a former colleague, Richard Davies, told me a few years ago. Richard was walking with two mates on the moors above Grassington, in Wharfedale, when they found a dead hiker lying face down on the path. One of the threesome was nominated to return to Grassington to alert the authorities while Richard and the other remained with the body. Several hours elapsed before the rescue team appeared. During this period, Richard and his mate became extremely hungry. In desperation they emptied the dead man’s rucksack and devoured his cheese and pickle sandwiches. Apparently they were very tasty.

I think that’s a funny story and so does Richard, but I can appreciate some people might find it distasteful and even offensive. But at least the sandwiches didn’t go to waste. And thank god they weren’t Marmite. 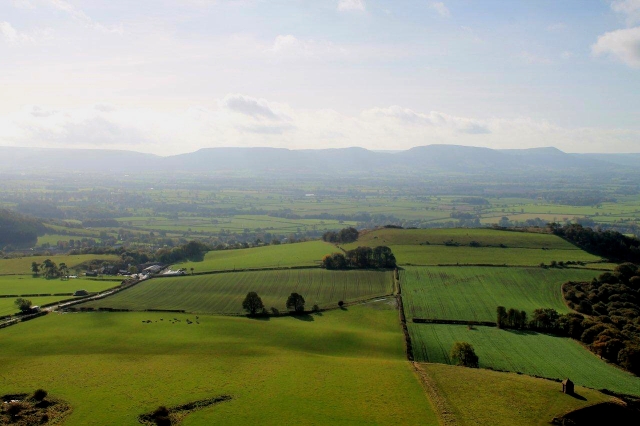 Aireyholme Farm, where James Cook’s family lived, is on the left of the picture. Their cottage was demolished in the 1930s and taken to Australia, where it was rebuilt

I take my leave of the wise man from ’Uddersfield and return to the escarpment to rejoin the Cleveland Way. I follow the footpath further into the east, across moors and bogs in warm October sunshine, before branching south along the most uplifting of tracks to the unexpectedly green valley of Sleddale. 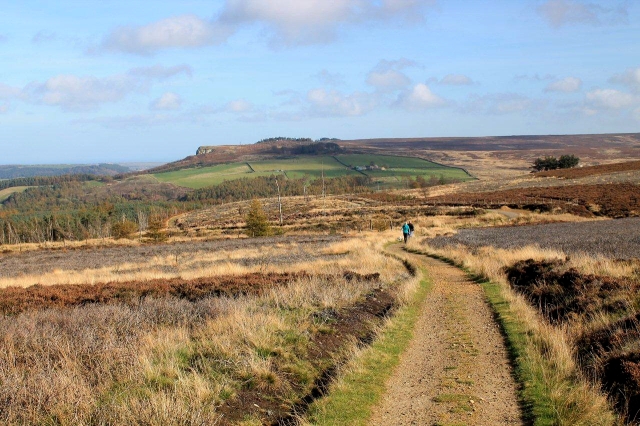 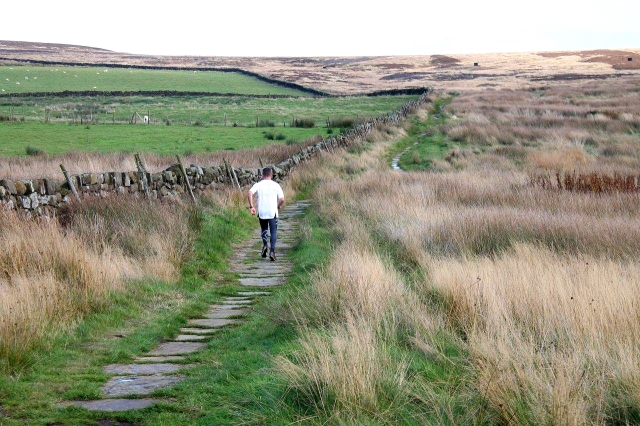 This half of a commemorative stone lies about half a mile distant from its other half, both of which have been incorporated into the surface of the Cleveland Way. I did a bit of Googling to see if I could track down Holy Trinity School but there are thousands of them. Someone else had tried as well, and the Cleveland Way National Trail body had replied to their query, stating that the stone slabs for the path are sourced in South Yorkshire and mainly come from old mill buildings. So the school is – or probably was – down south a bit. Possibly near ’Uddersfield

Sleddale is a place that has been carved from the moors by the sweat of men in ages past. Their endeavours have created a pool of fertile green pasture in a hollow between heathery ridges. To follow the track along the fence line and down to the farm is like discovering an unknown England. I had no idea this place existed. Now I don’t want to leave. I want to sit in the warm afternoon air until the shadows lengthen and evening mists fill the hollows, and the cold autumn night eases me on my way. But that’s not going to happen. 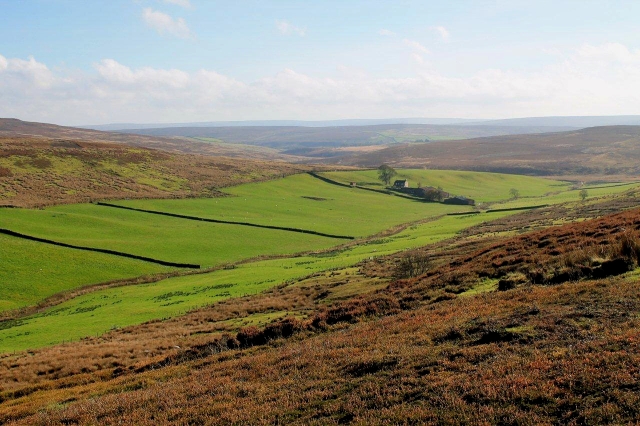 So I wander along a farm track, cross another heathery ridge and follow an overgrown forestry road back to Kildale. Cook’s tour complete.

Anyway, the lesson for today – I decide, as I brew a pan of tea in the van – is that age is no barrier to fitness and health. All that’s required for a long and fulfilling hill-walking career is determination and a positive attitude. And I must admit, the tap-dancing lessons sound rather appealing. 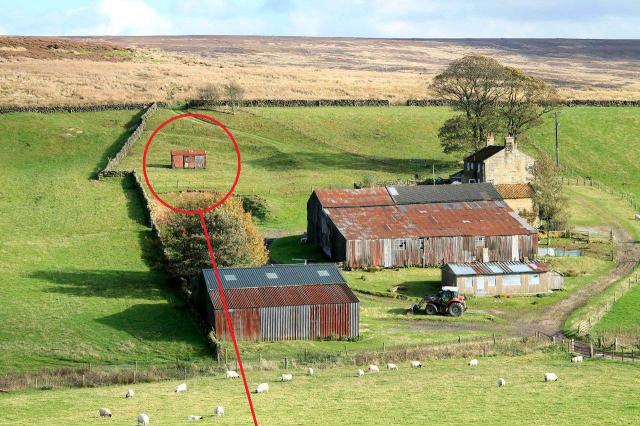 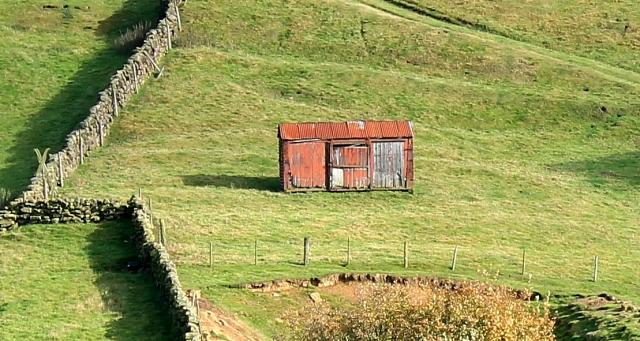 I’VE worn glasses since I was a boy of five because, basically, without them I can hardly see a thing. Everything is just smudges. That doesn’t stop me spotting an abandoned railway goods wagon stuck on the side of a moorland hill at a distance of just under a mile. The nearest railway to this ramshackle wagon runs through Kildale, a couple of miles distant. It didn’t get up here under its own steam.

What I like about old railway wagons is they turn up in the most obscure places yet fit in seamlessly to their adopted environment. This one is as much a part of the landscape as Sleddale Farm.

32 Responses to A Cook’s Tour of the Cleveland Hills