Days Like These, No 9: Clearing the Mind on the Cluanie Ridge

THERE are mornings I wake up with a head full of heaviness and pull the flysheet back to reveal an outside world full of more heaviness. Today is one of those mornings. Fog fills Strath Croe. Trees drip drumbeats of moisture on a wet tent. Sounds are muffled. Clothes are cold and damp. The last thing I feel like doing is rolling out of a warm sleeping bag and pushing feet into stiff boots. But a spark glowing in the recesses of the mind tells me that above this grey and smothered world there is another world of pure sunlight and expansive skies. So I pull on the damp clothes and stiff boots and drive slowly south along Glen Shiel to the banks of Loch Cluanie, where the world is still grey and smothered. But that’s life . . .

I park the car and listen to the BBC news. The Government is about to publish a dossier on Saddam Hussein’s weapons of mass destruction and prove beyond doubt that this madman is capable of destroying the world within 45 minutes. Blimey. Where would we be without the Joint Intelligence Committee? Up a gum tree and 45 minutes from destruction, that’s where.

Also on the news are reports about an earthquake in the Midlands with the epicentre beneath Dudley. I’ve never been to Dudley but my heart goes out to the people who live there. Apparently, the quake measured 4.8 on the Richter scale. Dudley police say “twelve people in their nightclothes walked into Dudley police station” but they don’t say why. Were they fleeing falling masonry, were they injured, were they looking for sanctuary or were they after a cup of tea? We don’t know. Inadequate bit of reporting by the BBC.

The fog isn’t lifting and the air is heavy with a clawing moisture that coats every blade of grass. But I summon the will to lace my boots and shoulder my pack because I know – I bloody well know – that on days like these there is light above the darkness. And the Cluanie Ridge will be the perfect place to stroll in that light.

I take the old drove road up the ridge towards Loch Loyne, and at the highest point veer north-west to begin the steep ascent of Creag a’ Mhàim (747m, 3,106ft). And slowly, ever so slowly, my world begins to brighten. Dark grey becomes light grey becomes whiteness becomes watery blue. Watery blue becomes a clear and unspoilt world where a fierce sun burns down and hills shove their shoulders through perfect white cloud. 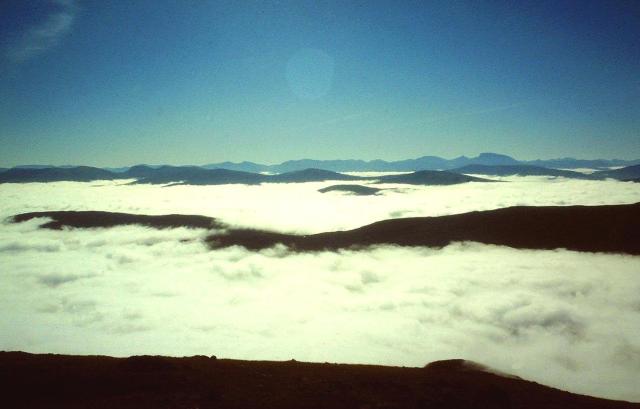 There is no need to go back because the valley fog has been burned off by the sun before midday. Clear skies stretch from horizon to horizon. I am high in a land of mountains and that’s how things should be. It’s a perfect day. It’s a mountain day.

On the Cluanie Ridge, September 2002

25 Responses to Days Like These, No 9: Clearing the Mind on the Cluanie Ridge