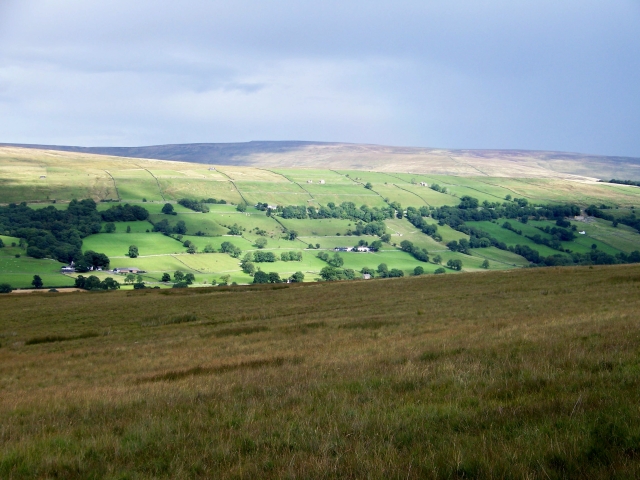 BOWES has a Dickensian look about it – gaunt stone buildings and a narrow main street built for stagecoaches. Dickens spent some time in the village, as it happens, lodging in the Ancient Unicorn, the local coaching inn. The village academy was immortalised as Dotheboys Hall in Nicholas Nickleby. And me, I’m just passing through. Bowes is the starting point for my Pennine trek. I’m heading for Hexham, which is many weary miles, two cold nights, a great deal of rough ground to the north. Off I go . . .

My wife gives me a cheery wave from the concrete bridge that spans the trans-Pennine A66, which was a turnpike road across desolate moorland in Dickens’ day. And I plod past the allotments, where an RAF flag flies jauntily above runner beans and polytunnels, and climb steadily up the hill towards Bowes Moor. (click pictures for high-res versions) 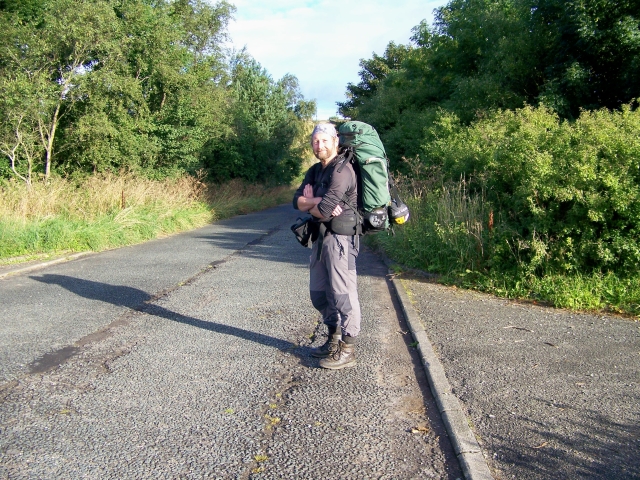 Backpacking is one of those human activities – along with being a travelling street-performer or living in a yurt – that possesses a certain romance but in practice is cold, miserable and uncomfortable. When the weather is fair and sunny, the backpacker is a blithe soul striding out towards distant blue ridges. When the weather is foul, he counts down the days to his destination and shakes raindrops from the end of his cold nose while mentally computing how much he can lighten his pack by eating the heaviest processed, freeze-dried, dehydrated and atomised packet of reconstituted vegetable pasta he is carrying. Oh, and working out the distance to the nearest bus stop.

Forgive me for referring to backpackers in the masculine. It’s just for convenience. In fact, the first fellow backpacker I meet on my travels is a female backpacker with a jolly disposition. She’s walking the Pennine Way backwards – that’s north to south, not facing the wrong direction. I forgot to tell you that this section of my Pennine trek follows the Pennine Way. But that’s not why I’m walking it – my doctor advised me to take this route. 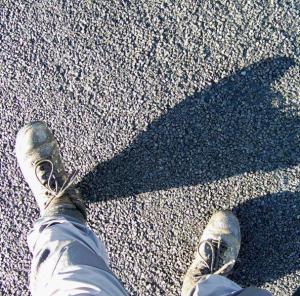 So I was sitting in the doctor’s surgery last week discussing mountains, fell-running and future expeditions – as you do when you’re having your blood pressure checked – when my GP advised me to start from Bowes instead of further along the A66, which had been my original intention. Start from Bowes and you walk past some isolated buildings with turf roofs, and it’s a beautiful walk, he said. It’s one of his favourite fell-running routes. So I decided I would. I always take my doctor’s advice. Except on the drinking thing. Twenty-one units of alcohol a week? Come on. 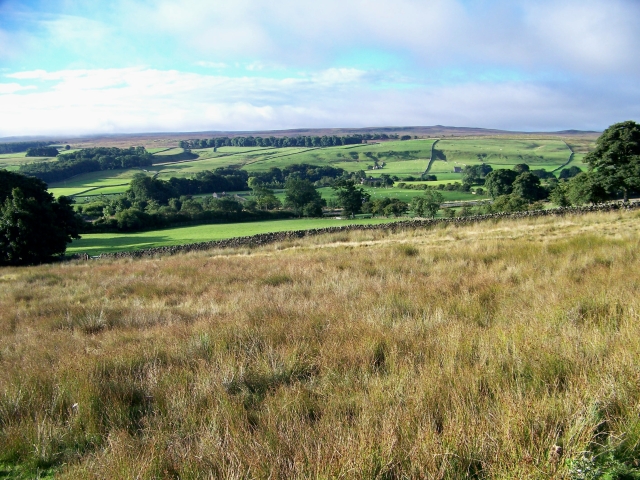 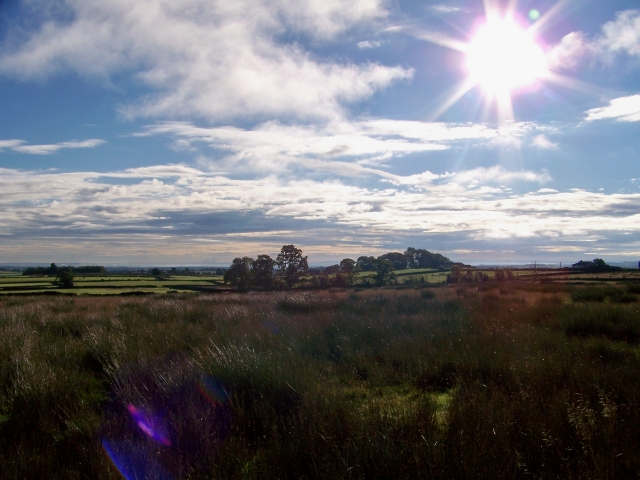 Above the village allotments the moorland opens out – but this isn’t freedom-to-roam country, this is a former military establishment where chemical weapons were stored during the Second World War.

I’d heard about Bowes Camp, from stories that have appeared in The Northern Echo over the years, but never actually been here. Subsequent research reveals that “the site stored weapons charged with mustard, phosgene and lewisite on an area of 564 acres of moorland. In total 17,000 tonnes of chemical agent was stored”. 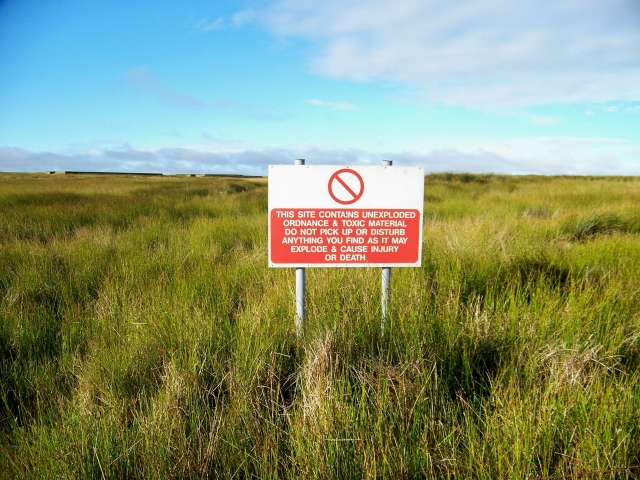 That’s enough to keep me on the right side of the fence. I don’t want a story appearing in the Echo about a wayward backpacker seen stumbling about Bowes Moor screaming “Gas, gas, quick boys,” rubbing his eyes in an ecstasy of fumbling – before realising after a moment of blind panic he’s inadvertently smeared midge repellent on his contact lenses.

The road meanders through acres of abandoned camp. Strange ruins litter the hillsides. Dark shapes and humps interrupt the horizon. The concrete foundations of huts are everywhere – poking through turf, abutting the roadside fences, rows of oblongs along overgrown roadways. It’s the sort of place a person with an inquisitive mind would really, really, really like to poke about in. Except for the mustard gas. That’s a real disincentive. 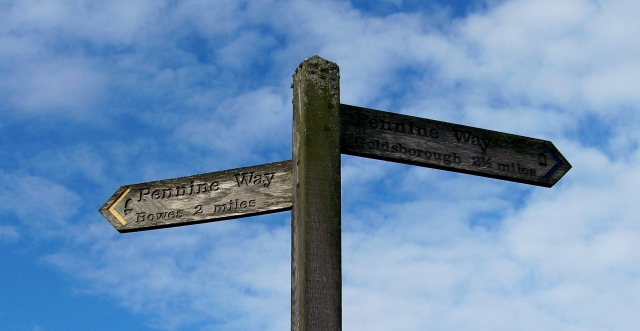 At Levy Pool I spy the steeply-pitched turf-roof buildings my doctor told me about. My blood pressure was fine, by the way. From a distance, they look more like thatch than turf roofs, but I may be wrong. Either way, they are intriguing because they are totally out of character for the northern Pennines. It’s an interesting place. 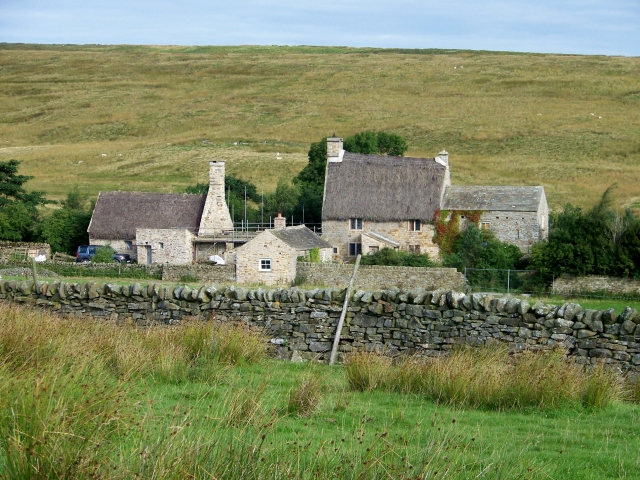 Beyond Levy Pool the moorland stretches unbroken. The Pennine Way is a faint track through bogland and damp grasses. The skies are big and windy. The clouds are white but gathering. It’s a fine day for walking and fine country to walk across. And I see no one all morning except three blokes repairing a wall at Clove Lodge, the female backpacker crossing Hazelgarth Rigg, and three anglers huddled near the grey waters of Grassholme Reservoir. 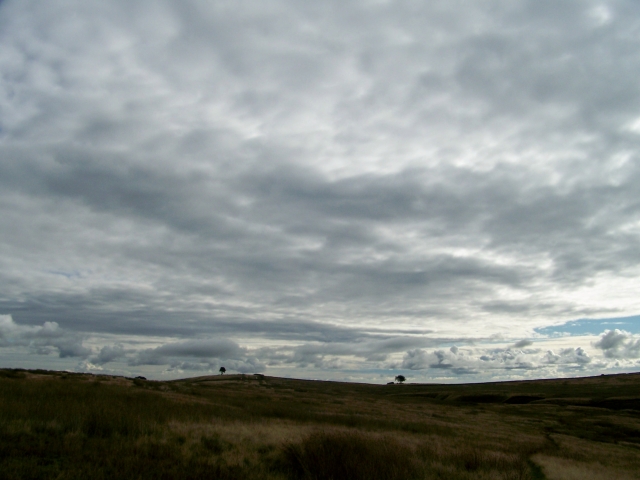 I pass High Birk Hatt, where Hannah Hauxwell farmed alone for many years. Remember her? Became an overnight TV celebrity, somewhat exploited by media executives who thought it would make good viewing to pluck someone from a remote, rural environment and plonk her in the middle of glitzy London. More than a little bit of The Truman Show in that, I thought. 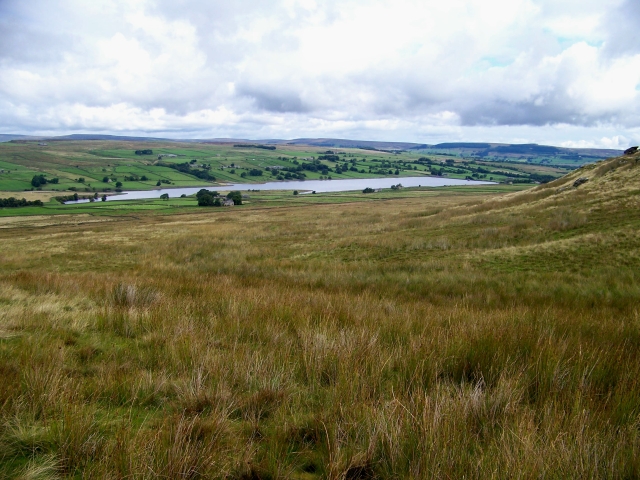 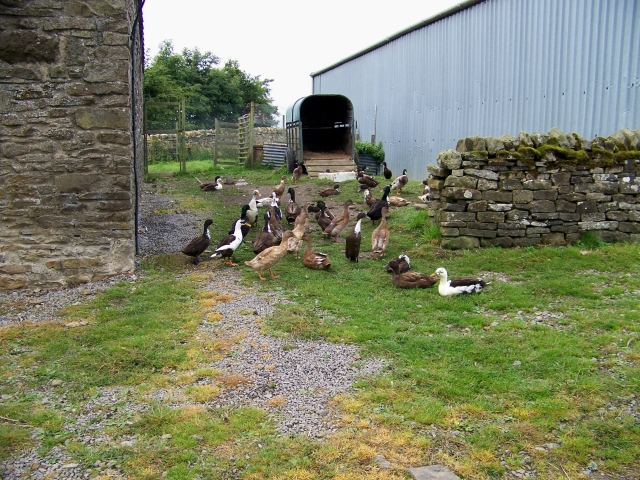 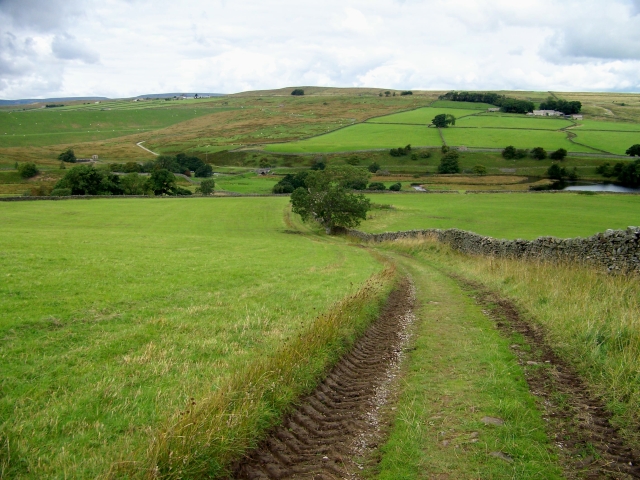 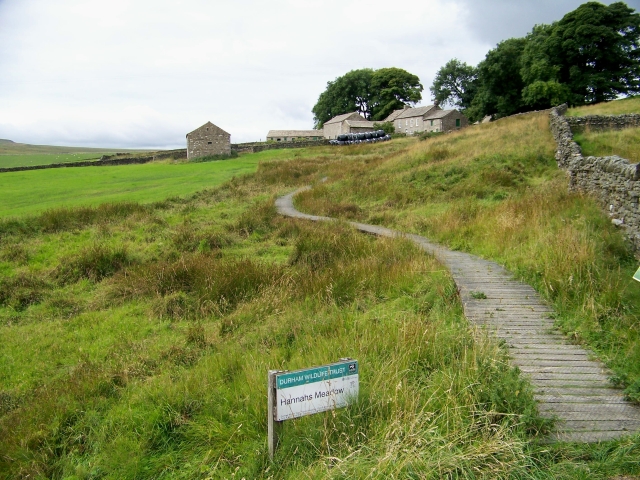 Excuse me, but I think Hannah’s Meadow should have an apostrophe 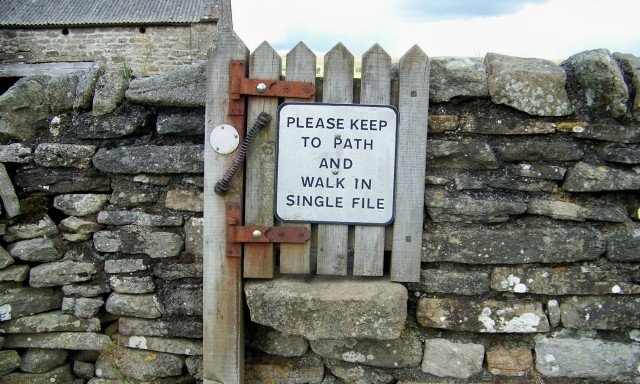 I stood in front of this notice for some considerable time wondering how a lone backpacker might walk in single file. I don’t take too kindly to being told how to deport myself. I wouldn’t have minded if there had been a crop of delicate and valuable exotic vegetables growing in the field but it was just common grass – the stuff that flourishes on rugby pitches and in public parks. So I did my best to walk like a crowd, just out of bloody-mindedness. And that’s not easy 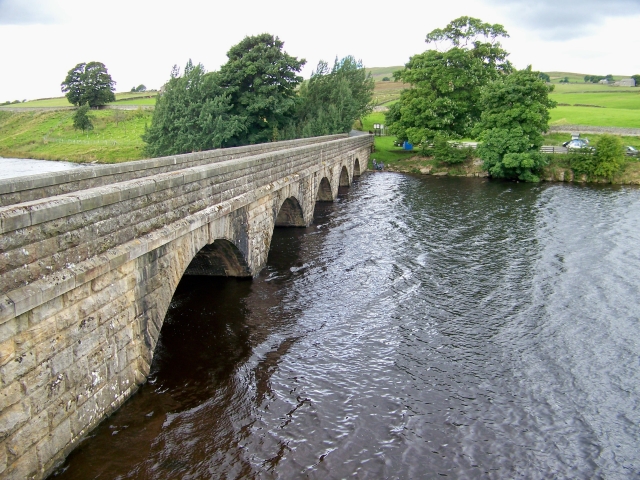 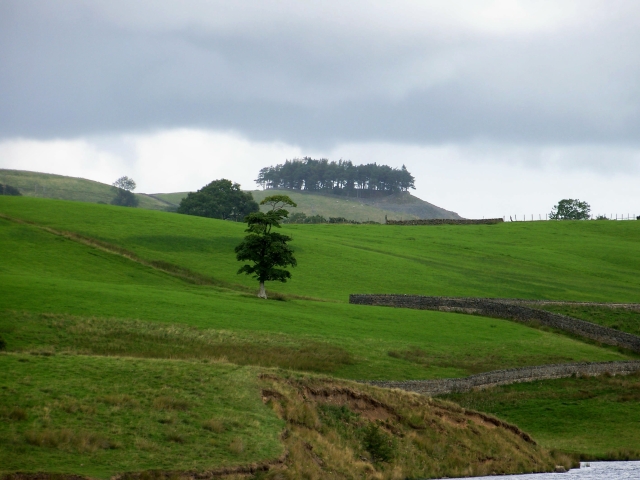 Things are going smoothly until Wythes Hill, above the reservoir. Here I leave the Pennine Way to take an overgrown bridleway across Lune Moor to upper Teesdale. It immediately starts raining heavily. I work out the location of the nearest bus stop while plodding almost aimlessly through knee-deep sedges and banks of spiky grass towards a distant hilltop. If a bridleway once existed in this loveless place, a hundred years have passed since a horse trotted its length.

But salvation comes to those who strive, and on the crown of the moor the sun bursts through black clouds to reveal a cosy wooden shed built by the grouse-killing fraternity, which is ideal for taking one’s lunch. There’s even a table. Damned sporting of them, if you ask me.

Things get better. Incredibly, I’m slap-bang on the course of my unseen bridleway, and from here it exists as a faint path over Crossthwaite Common to Holwick Scars.

There are some interesting topographical names in this area: Swinket Mease Rigg, Wool Ingles, Rotten Rigg, Bink Moss. These features were named back in the days when people made their own entertainment. I bet they had a right good laugh. Television spoilt all that. 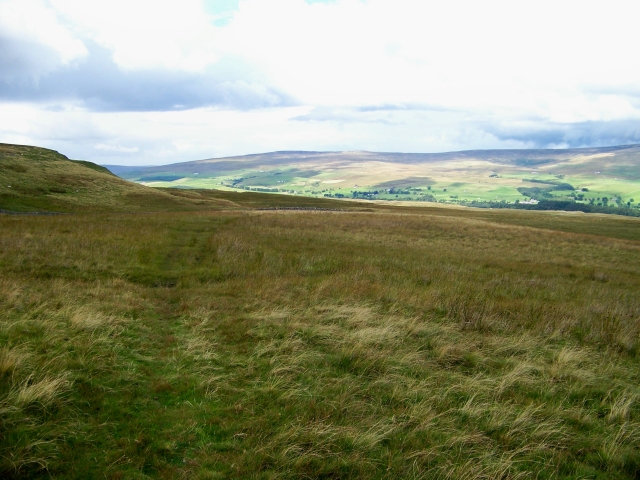 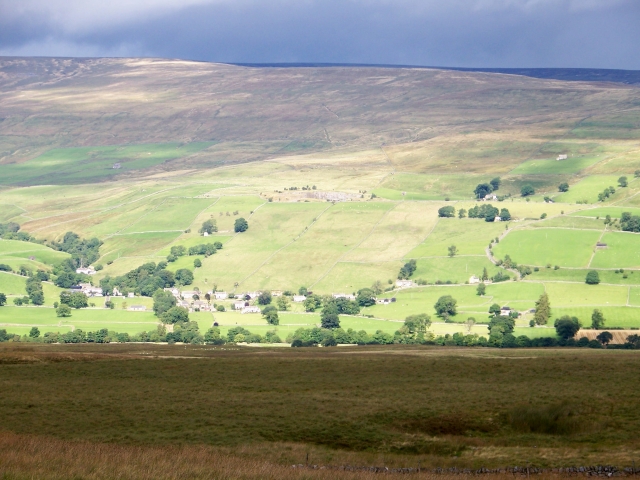 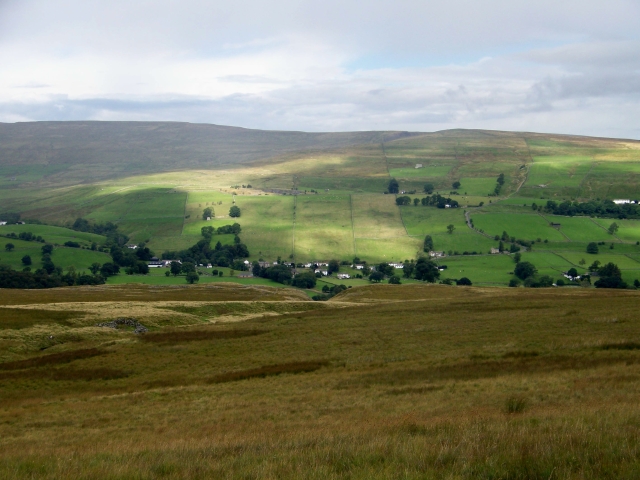 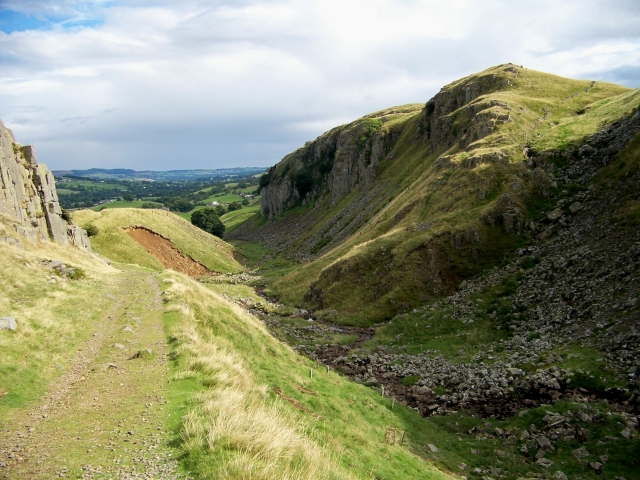 But beyond Holwick Scars, above, the rains roll back in a dirty grey curtain from the north-west. I follow the Green Trod, an old droving road, across bogland where even the stoutest boots succumb to the relentless peaty water, as the weather batters my pack and waterproofs. This wasn’t in the forecast.

Cold, damp, and in low spirits, I rejoin the Pennine Way above Cronkley Farm and meet two backpackers walking the full trail from Derbyshire to the Borders. They’re in their second week. And their spirits are brighter than mine, which does rather put things into perspective. So I buck up, and we cross the River Tees on a wooden bridge as the sun once more emerges from behind rainclouds. 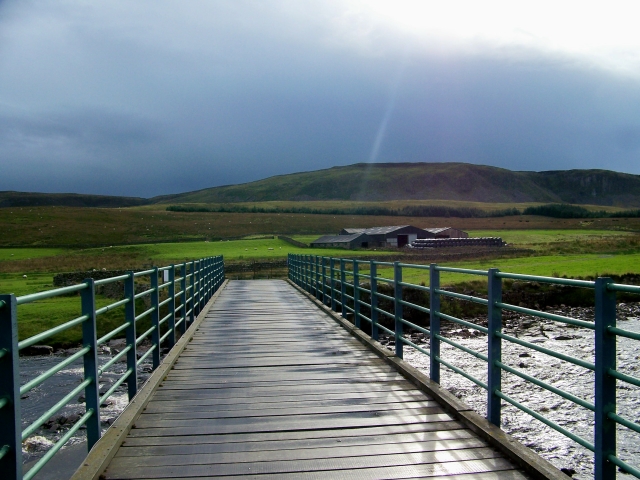 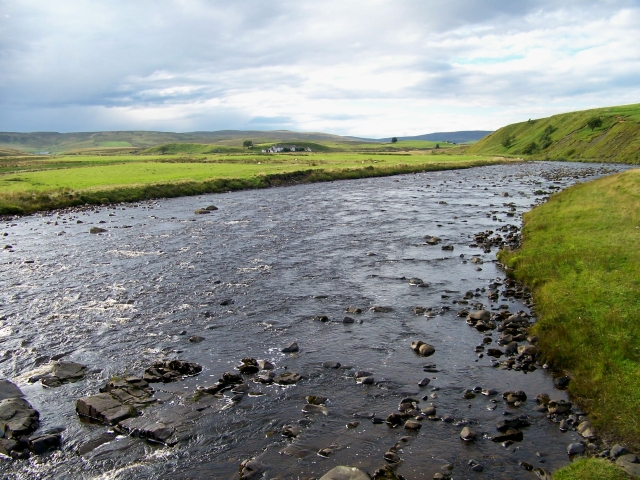 My brightness, like the sun’s, is short-lived. At Forest-in-Teesdale the walkers shoot off to a B&B, hot showers, hearty food and warm beds. I raise my eyes to the darkness of Fendrith Hill, a great tussocky mass that separates Teesdale from Weardale – and on whose windswept, rainlashed upper slopes it is my intention to spend the night.

In rain and wind, and with darkness approaching, I follow and old quarry track through hillside pastures to high intak fields and rough meadow. Beneath High Hurst Edge there’s an old quarry and a patch of flat grass. I pitch the tent and crawl inside. Then as I’m cooking the heaviest meal in my pack, the clouds finally break and the evening sun comes streaming through. 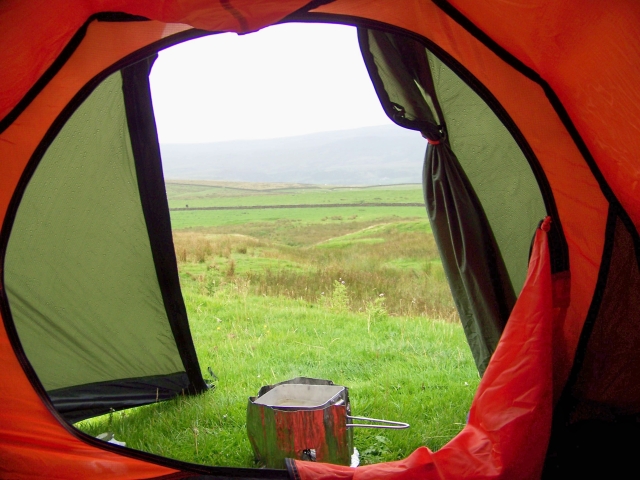 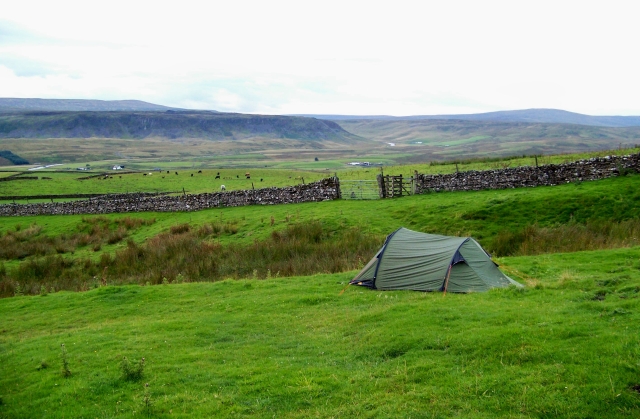 This is what backpacking is about. I knew there were good bits. This is where romance meets reality. These are the dreamed about, imagined fragments upon which we occasionally stumble. Islands in stormy seas.

I finish my dinner, boil a final pan of tea, and watch the sun sink behind dark hills in the west. Thin clouds trail across an otherwise clear sky. Night is here, and it’s going to be a cold one.

27 Responses to A Pennine Trek, Part 1 – Moorland and Mustard Gas