The High and the Mighty – Carneddau 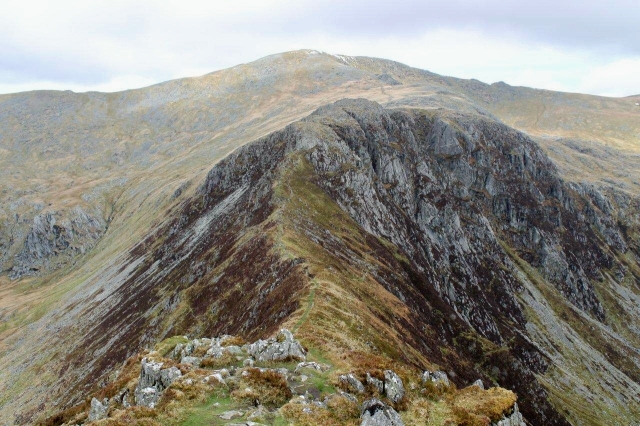 SOMETIMES it’s enough just to climb a mountain and allow your thoughts to sail on the wind. No worries, no anchors. This is one of those days . . .

I’m not too familiar with the mountains of Wales, and to tell you the truth I’ve always been reluctant to commit myself to spending time in its hills. But I’m being won over.

Carnedd Llewelyn is a Welsh giant standing at 1,064m (3,490ft). I set off at 9.15am to scale its southern ridge and satellite peak – Pen yr Helgi Du – anticipating a pleasant and steady stroll. But I’m ambushed by an awkward step down a couple of hundred feet of rough ground followed by a scramble up some craggy things between Pen yr Helgi Du and the summit of Carnedd Llewelyn. I was expecting a gently-rising ridge to amble along in the sunshine. This illustrates the merits of paying attention to your map – something I haven’t done. (Click pictures for high-res versions) 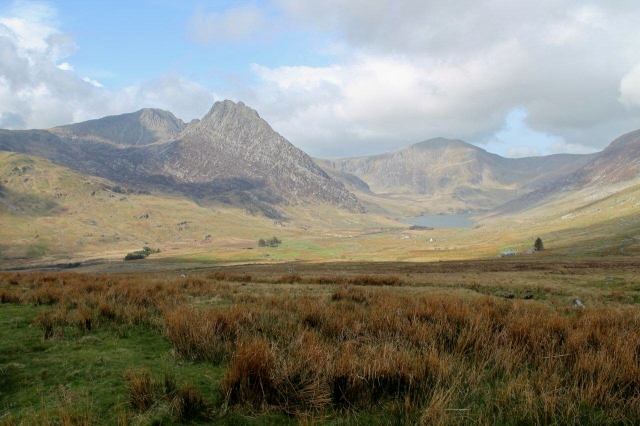 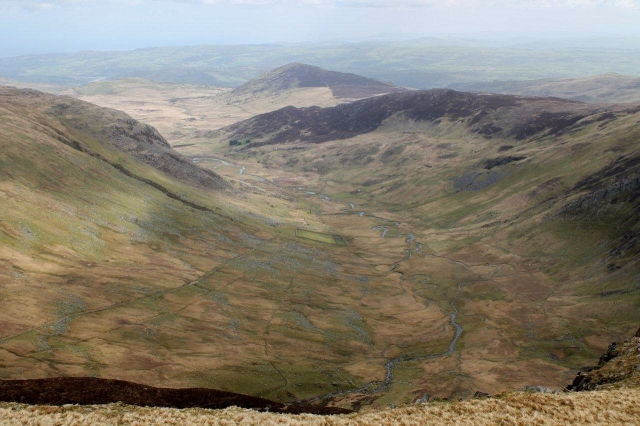 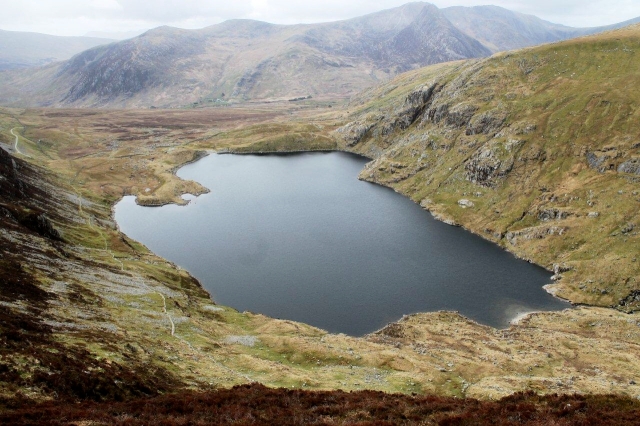 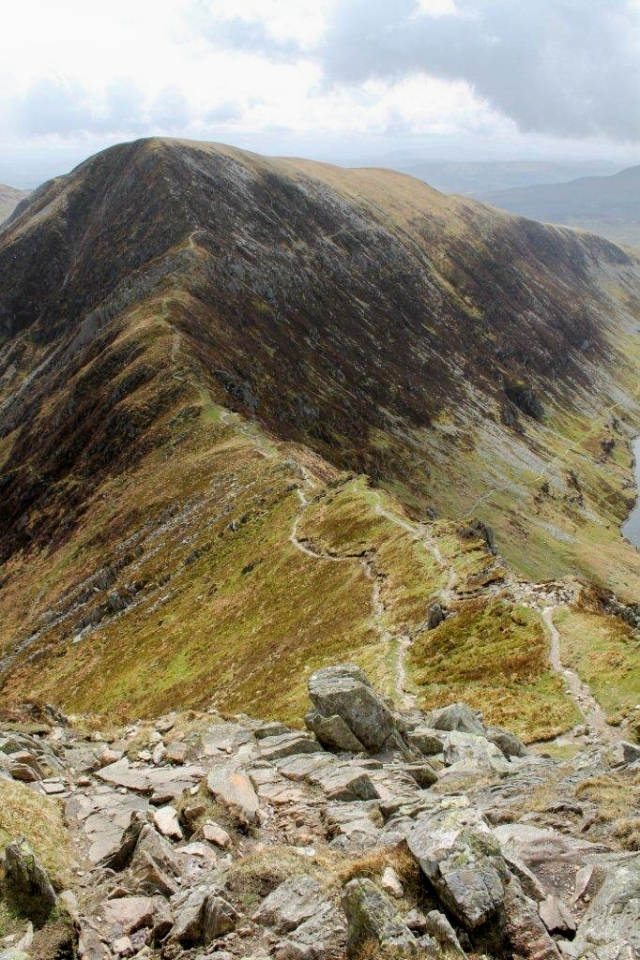 The summit of Carnedd Llewelyn is bleak, stony, and icy cold. Clouds are gathering on the Glyders to the south as I continue my walk towards Llewelyn’s brother peak, Carnedd Dafydd (1,044m, 3,425ft), (two shots below from different angles), along a splendid ridge that tumbles in gaunt crags on its northern flank. This is impressive country. This is Wales at its wildest, showing its teeth and its broken bones. 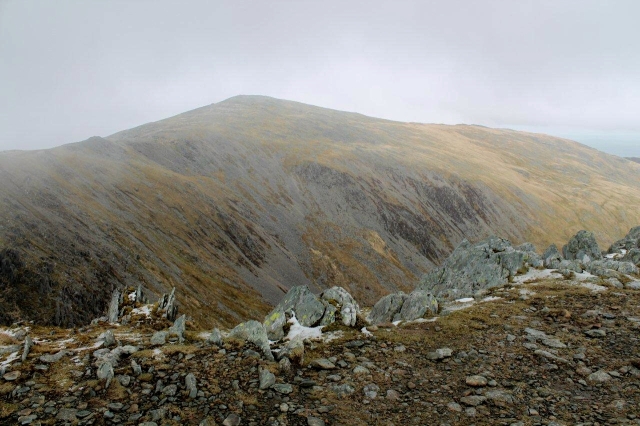 Before I reach Carnedd Dafydd a blizzard streams in to engulf the visible world. Hard snow or soft hail – I can’t decide which. It bounces off my waterproofs like tiny polystyrene pellets. The Inuit probably have several names for it – or is that an urban myth? 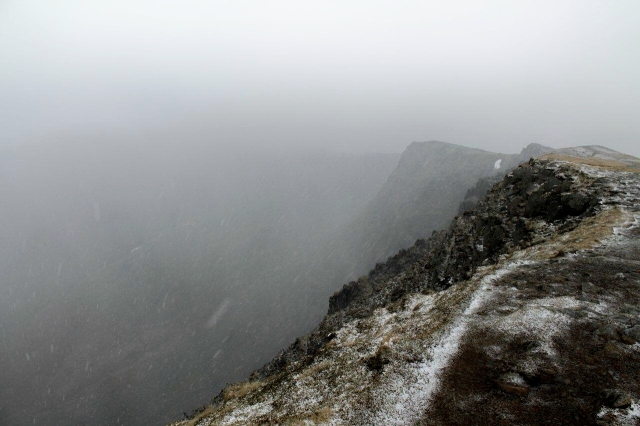 In a rough stone shelter on the summit of Carnedd Dafydd I chat to a bloke who was caught in a similar blizzard yesterday on the Glyders. Didn’t see a thing all day, apparently, except his boots and the ground beneath them. Today the clouds sweep around the Glyders in great, grey folds, momentarily revealing stark walls of rock before swallowing them again. 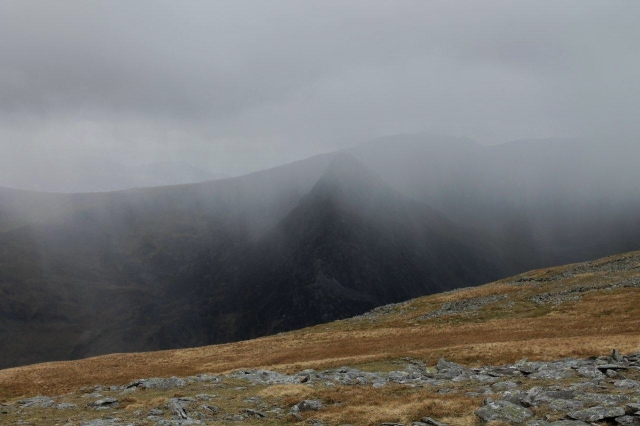 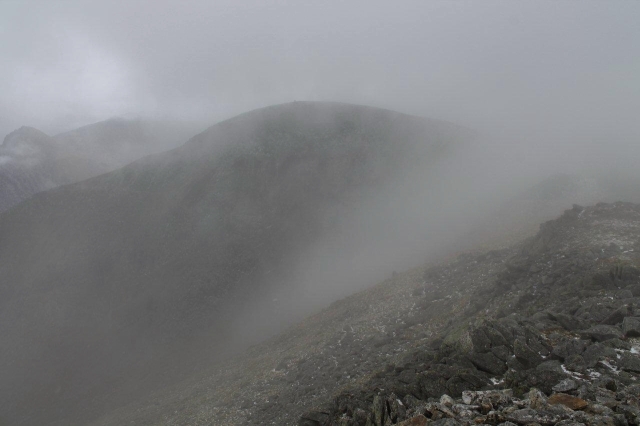 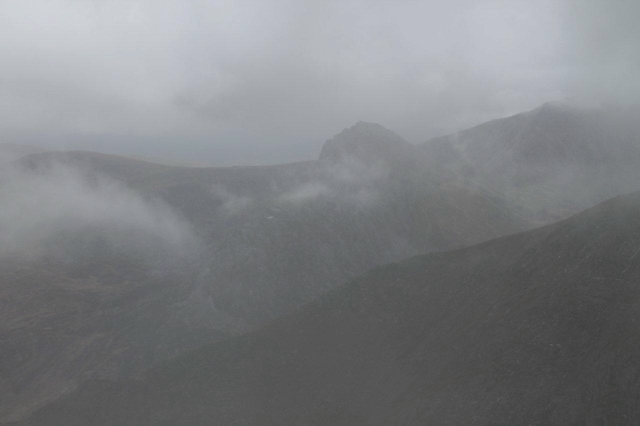 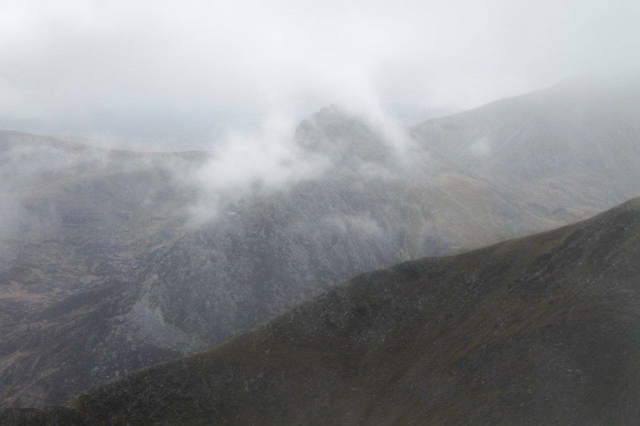 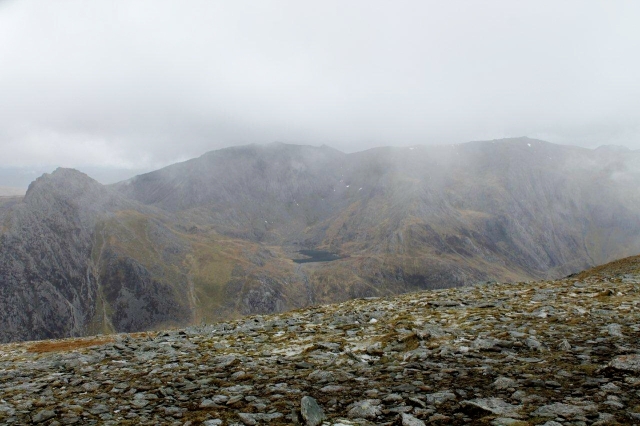 Glyders. I feel like I’m name-dropping. I’ve read dozens of books and articles about them, but I’ve never actually seen the Glyders until today. They are impressive hills. 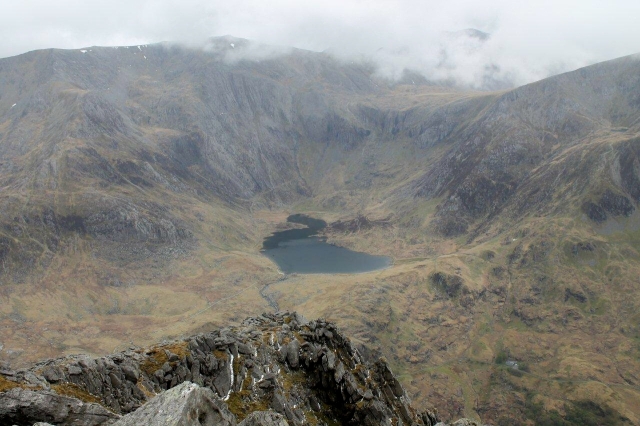 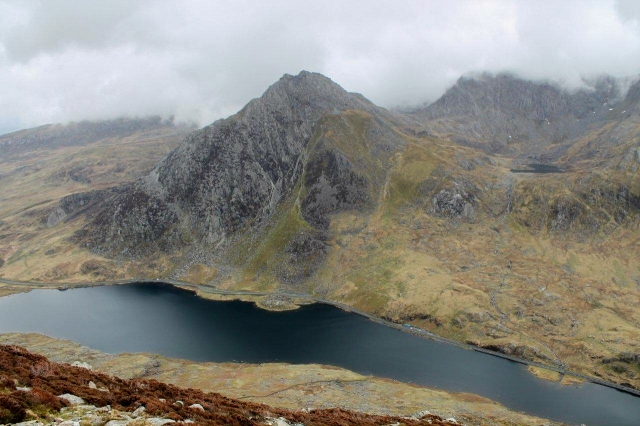 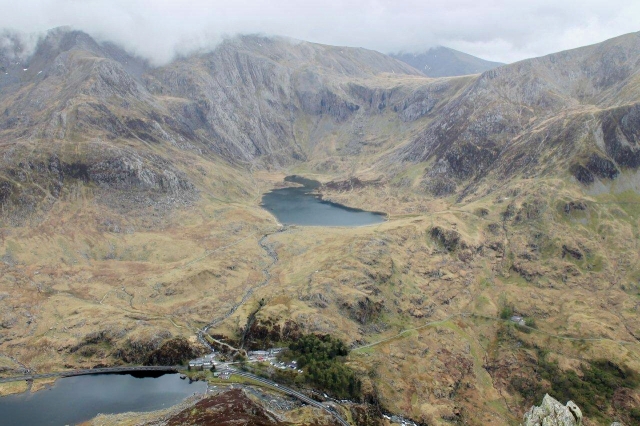 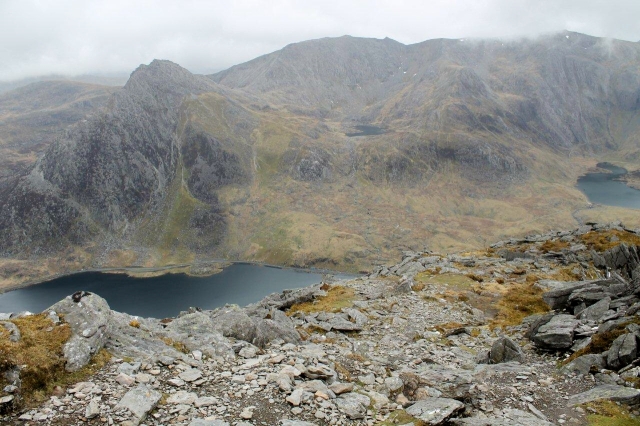 In snow and mist I complete the horseshoe of ridges to Pen yr Ole Wen (978m, 3,208ft) and embark on what is probably the steepest mountain descent in the British Isles – short of leaping off the Old Man of Hoy into the sea. It’s hard on the knees, and the seat of my trousers takes a battering, but the scenery makes every bruise, creak, scratch, grind and grimace worthwhile. 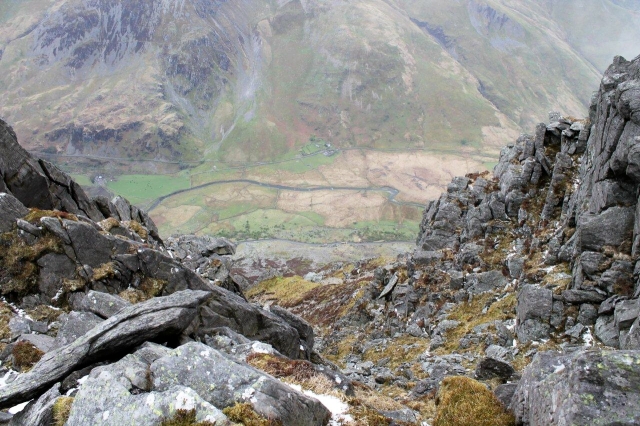 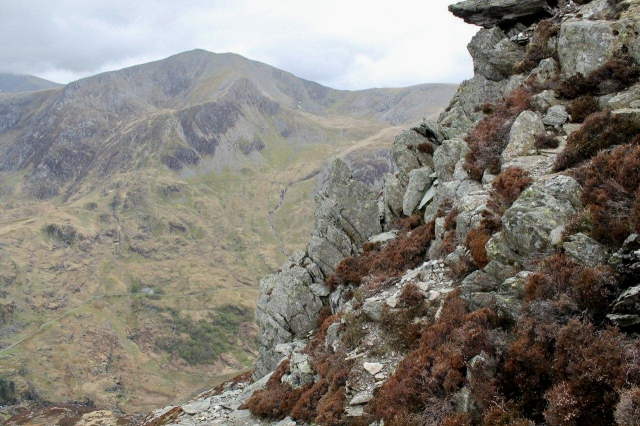 And that’s all. Peaceful thoughts as wind whips and hail falls. Wonderment as vast rock faces slip in and out of clouds. New country. Unsettled elements. Tired muscles. Sometimes it’s enough just to climb a mountain. 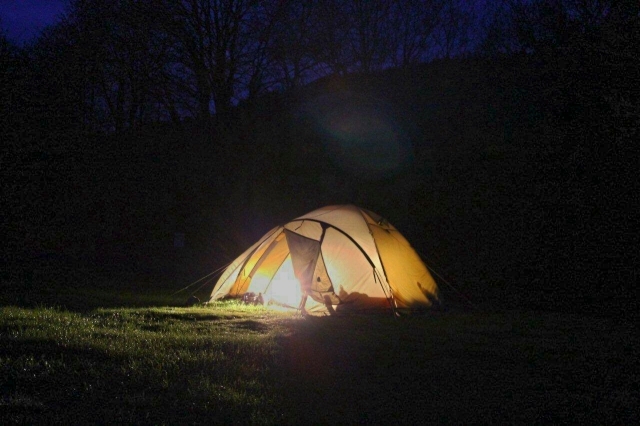 34 Responses to The High and the Mighty – Carneddau