In Praise of Scotch Pies and Carn á Chlamain 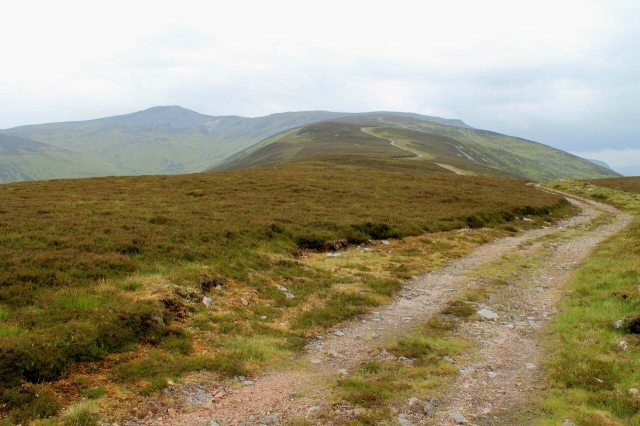 JOHN Lennon had a dream about a man in a flaming pie who said: “From this day on you will call yourselves Beatles with a A.” Simple Simon met a pie man going to the fair. Little Jack Horner sat in a corner and stuck his thumb into a rather controversial pastry to pull out a plum. Four-and-twenty blackbirds came to a sticky end beneath a royal crust. Sometimes we are obliged to eat the humble version. Statisticians slice up pies into segments just to amuse themselves.

The pie is part of our culture and should be cherished like the Tolpuddle sycamore or the last night of the Proms. It should be cast in bronze and placed on the fourth plinth in Trafalgar Square . . .

The pie defines us as a nation. Desperate Dan, the cowboy from Dundee, what did he eat? Cow pie with horns and tail sticking through the crust, that’s what. Lord Woolton, Minister of Food during the war, what did he invent? Woolton pie, a nutritious vegetable and Marmite dish that sustained us through our darkest days. What are the people of Melton Mowbray famous for? Their fabulous Melton Mowbray pork pies. Who fancies a slice of Bedfordshire Clanger, or shepherd’s, cottage, Cumberland or Derby? And what did Rupert Murdoch have thrust in his face while being quizzed by a parliamentary committee? A custard pie, ha ha.

Actually, on that final point, did you notice that some of the humourless tossers in the national press and TV news insisted on referring to it as a “shaving foam pie”? There is no such thing as a shaving foam pie. It’s a custard pie, in the same way a pantomime horse is a pantomime horse, not “two stage performers in an equine costume emulating a farmyard animal in comic fashion”.

Back to proper pies. The best, the most delicious and delectable pie by a country mile is the Scotch pie. It is the unsung hero of the pie world. In pie world pecking order, the Scotch pie sits demurely at the back like the woman in the orchestra who plays the harp, while the Melton Mowbrays and meat-and-potatoes are up the front like James Last and Mantovani.

And yes, I know I’ve touched on the subject of Scotch pies in the past (and delved deliciously beneath the fluffy crust of its brassy cousin, the Fray Bentos Steak and Kidney), but today I have one of the unassuming little rascals tucked safely in my bait box and ready to perform its preordained duty on the summit of Carn á Chlamain (or Carn á Charmaine, as Mantovani might have called it).

This is no ordinary Scotch pie. This is a Blairgowrie Scotch pie from the Gowrie Bakery, just a step across the hills from the Blair Atholl store where I secured its ownership with a few bright coins. Not only that, it’s the SECOND Blairgowrie Scotch pie I’ve purchased in the past 14 hours, because I ate its predecessor in the middle of the night and had to acquire a substitute.

So I’m trundling six delightful miles along Glen Tilt on my knackered old mountain bike, with my Blairgowrie Scotch pie nestling snugly in my sack, when the wind begins to bend trees and rain slants from the east. Clouds lower themselves onto the higher summits of Beinn á Ghlo and the sun says goodbye to the day. 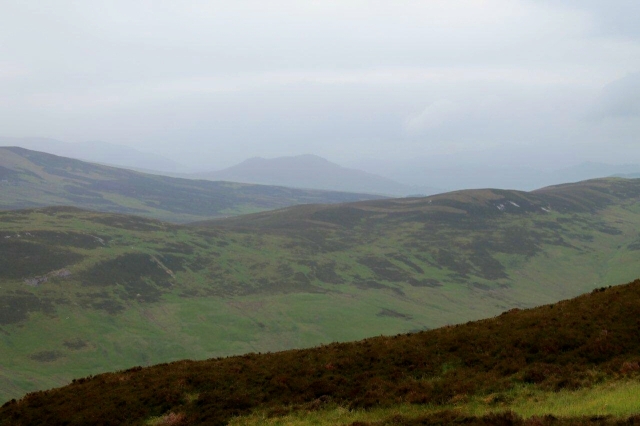 Carn á Chlamain (963m or 3,159ft) is a pretty little Munro, spoiled only by a Land-Rover track running right to the summit. And the least said about that the better. But in deteriorating weather, with mist threatening to choke off the views, the track could be an advantage. 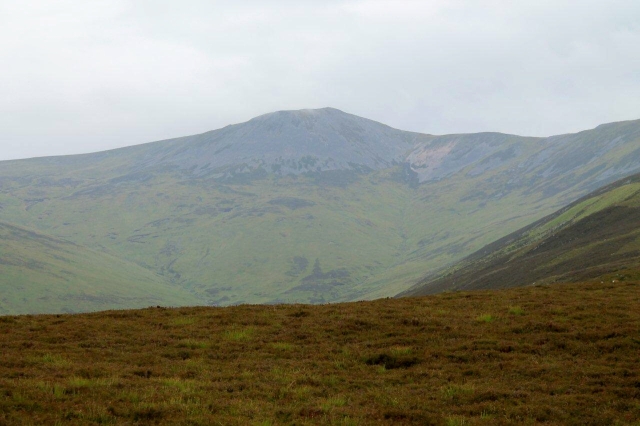 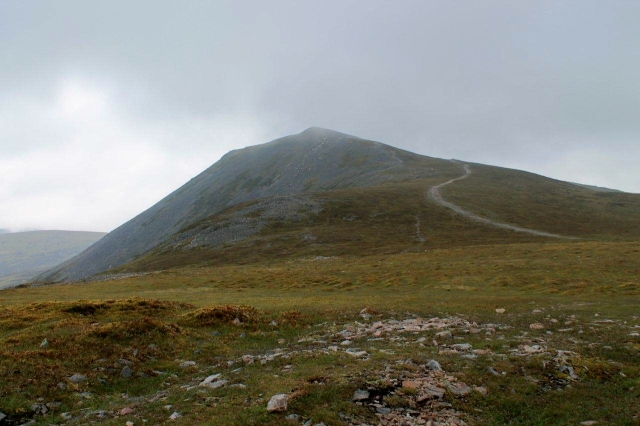 I tether the bike to a wooden bridge that spans the Allt Craoinidh – rather like Desperate Dan tethering his horse before eating his cow pie – and climb the steep green toe of Carn á Chlamain’s long south-west ridge to join the track. From the ridge, I gaze through curtains of rain to mist swirling about the shoulders of Beinn á Ghlo, and down into the glen where ruined black-houses and abandoned 19th Century farmsteads are scattered along the slopes. Glen Tilt appears to have been occupied by poor people in the days before it became fashionable to get evicted (click on lower picture for close-up of ruined black-houses, and see notes at the end for details). 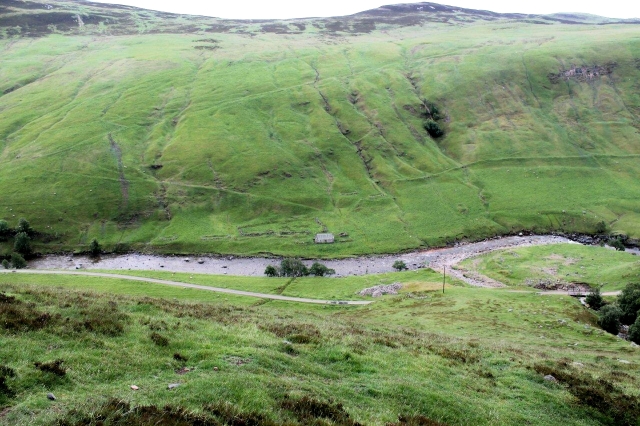 The wind whips itself into a frenzy and rain hammers down. By the time I reach the top of the ridge and bear north towards the summit, I’m feeling pretty cold, pretty wet and pretty hungry.

I’m a few hundred yards short of the summit when the entire mountain is consumed by a dirty great cloud and visibility is reduced to about twenty paces. In a fit of despondency I sit down in the turf and eat the Scotch pie. No ceremony, no frills. I just stuff it down my neck in great gulps like a ravenous dog. Then I trudge the last few steps to the cairn, gaze out upon nothing, and walk sullenly down the mountain with rain filling my boots. 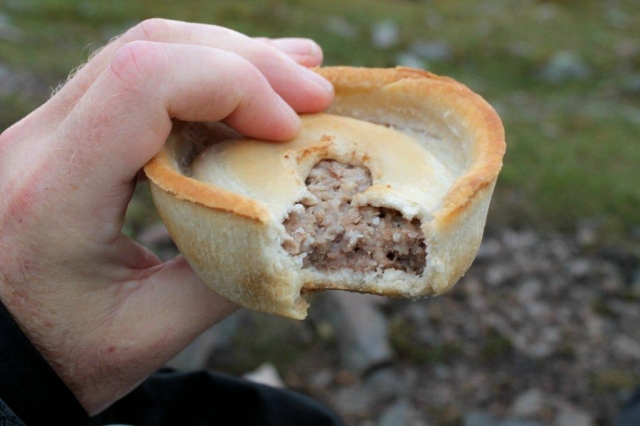 Back at the car, still cold and wet and spattered with mud thrown up by the mountain bike tyres, I open a can of Sainsbury’s Bombay Potatoes to warm the inner man. I don’t care much for tinned curry, but the Bombay Potatoes turn out to be tasty and filling, with a pleasant though mild afterglow.

Just what a bloke needs to end a day on the hill. After all, curry is part of our culture, a jewel in our culinary crown, and should be cherished like the Stone of Scone and Carry On Up the Khyber.