Long Meg – Standing with the Stones

I AM a caveman. My roots are in the Neolithic period. This is something I became aware of at an early age – even before watching Stig of the Dump on Blue Peter. That’s why I took up potholing as a teenager and became a tunneller in a slate quarry before getting a soft job in a warm office . . .

Cavemen have had a bad press. They are usually depicted as thick, uncouth, insensitive beings who can’t string two “ugs” together and knock women about with sticks. But really, they were as sophisticated, gifted, intelligent, erudite, and advanced for their time as we are for ours. They just didn’t have BlackBerry and Twitter. Mainly because they didn’t need them.

Today I’m drifting among the standing stones called Long Meg and her Daughters, which inhabit a hill on the outskirts of Little Salkeld, between the Lake District and the Pennines. I first came here in the early 1990s with a busload of archaeologists from Barrow-in-Furness. I was working for the North-West Evening Mail at the time and they invited me along to write a feature. It was a great day. We started at Castlerigg stone circle, near Keswick, moved on to King Arthur’s Round Table and Mayburgh Henge at Eamont Bridge, and ended up at Long Meg.

The archaeologists on the bus trip could be divided into two groups. There were the traditional, stereotypical, trowel-clutching, wax-jacketed, grey-bearded, penny-spectacled, Balkan Sobranie-smoking, leather-hatted types. Then there were the tangly-haired, patchouli-scented, vegetarian, nose-studded, lip-studded, eyebrow-studded, New Age variety who joined hands around the stones and did things with crystals and magnets. Instead of polarising into two distinct camps, both groups took the micky out of each other in a gently English sort of fashion, which I found quite endearing.

I’m back at the stones today because a couple of weeks ago I biked the Coast to Coast cycle route from Whitehaven to Sunderland. Towards the close of the first day I spotted the sign to Long Meg. It stirred memories and awakened the caveman in me. Not that it has been particularly dormant. Once a caveman, always a caveman. But I decided, there and then, to return the first chance I got.

There’s a legend about Long Meg. She was a witch who was caught dancing with her pagan daughters – and the price for that, in those days, was to be turned to stone. Another legend maintains that the daughters cannot be counted accurately, and anyone trying to do so will arrive at a different number every time. With little sense of decorum or appreciation of the mystic, Wikipedia unhelpfully states there are 51. So no need to bother counting.

Meg is a towering wedge of Permo-Triassic sandstone that stands in isolation outside the circle. While the elegant Meg is hewn from the local rock and has cup and ring carvings on her sides, pictured below, her daughters are less-attractive rhyolite granite boulders. The daughters form the circle, which has a diameter of about 350ft and is the second largest in the country.

Today, only the cows appreciate the sanctity of this place. Thousands of years ago, in the late Neolithic period or early Bronze Age, or whenever it was these stones were dragged up the hill, Meg would have been the talk of every cave in the neighbourhood. 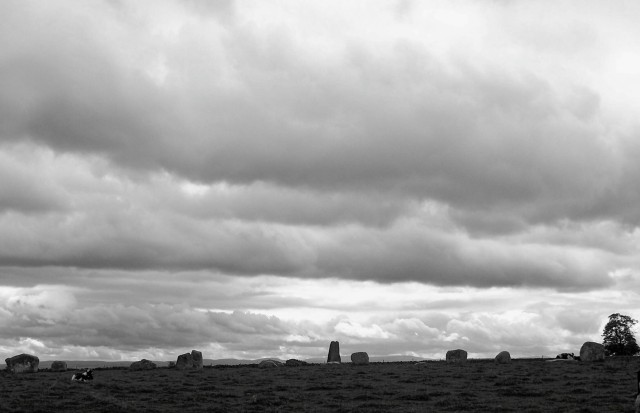 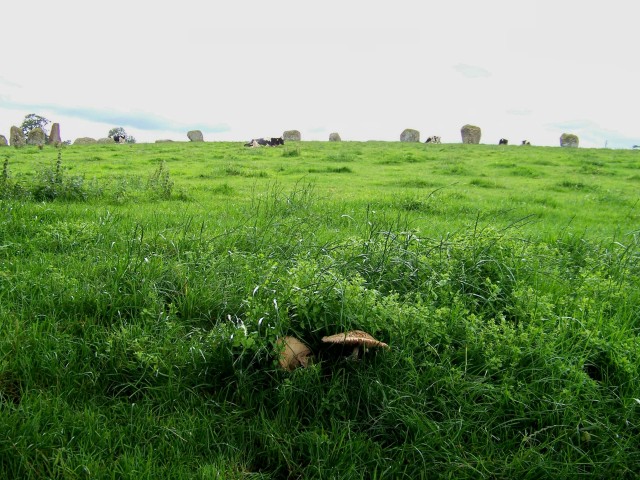 I stand here in the middle of the circle and gaze west to the fells and east to the Pennines, and around me at these impressive stones, and I marvel at the ingenuity, skill, vision, strength, passion and creativity our cavemen ancestors possessed. And I think: could we – we modern people – with our technical knowledge, enlightenment and sophistication, drag 52 large boulders to the top of a hill without a fleet of low-loaders and a couple of cranes? Could we carve a 16ft block of sandstone from a quarry face using tools we had made ourselves? How many of us can tell the difference between Permo-Triassic sandstone and rhyolite granite? Who is capable, without resorting to the use of a theodolite and a bundle of digital equipment, of positioning several dozen megaliths in a circle and aligning Meg’s four corners to the points of the compass? And who has the skill to stand a lump of sandstone weighing several tonnes on its end, so precisely and firmly that it will remain in the same position for 4,000 years?

And there’s a bigger picture – the henges at Eamont Bridge, the stone circles at Castlerigg and Swinside, and a hundred more the length and breadth of the British Isles and across into Europe. Their builders weren’t low-browed hunter-gatherers with bad attitudes and tangled beards; they were mathematicians, engineers, astronomers, artists, poets, craftsmen, artisans, managers, administrators and architects. They could move mountains – and they did. They had a society – a Big Society – that was organised and had purpose. And they left a legacy that was so permanent, so rooted in the earth, that it will still be visible when the Angel of the North has turned to rust.

Cavemen. Don’t knock us. Join us.

7 Responses to Long Meg – Standing with the Stones