Me and Carole King on Beinn Iutharn Mhor and Carn Bhac

Posted on September 8, 2010 by McFadzean 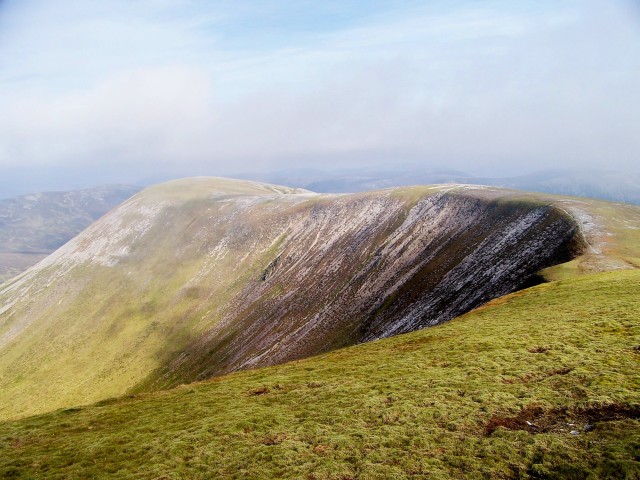 From the summit of Beinn Iutharn Mhor, looking towards the North Top

THE big mistake of the day is to gaze at the horizon and mouth the words: Way Over Yonder. This rattles a brain cell that has lain happily dormant for about 35 years, and before I’ve left the car park at Inverey I’m bursting into spasmodic and involuntary snatches of Carole King songs, lurching from one to another like a backwoodsman with Tourette’s syndrome. It’s too late, baby. It’s too late.

I cycle out of the car park, above the banks of the River Dee and with the Cairngorms behind me, towards some formal-looking estate buildings where a young chap – impeccably dressed in stalking gear – is pinning a sheet of paper to a notice board.

Bugger. Warning to walkers. Stalking in progress. The guardians of the countryside are busy pursuing their adopted role of conservationist by killing deer. It’s for their own good, don’t you know? Survival of the fittest. Wheat from the chaff. And, apparently, stalking boosts the local economy by unquantifiable millions and spreads wealth into every home. Meanwhile, someone is practising with a high-velocity rifle in the trees to my left. Crack. Crack. Smackwater Jack had a shotgun. Smackwater Jack.

I dismount a shade more ungracefully than I would prefer and approach the young man (neat hair, clean chin, stalker’s cap, creases in his tweeds). We determine that the estate’s stalking plans and my walking route will not interfere with each other. Top ho. I bid him a cheery good day and rattle off up the Glen Ey track while he removes a not-so-traditional-looking all-terrain six-wheel vehicle from a barn. 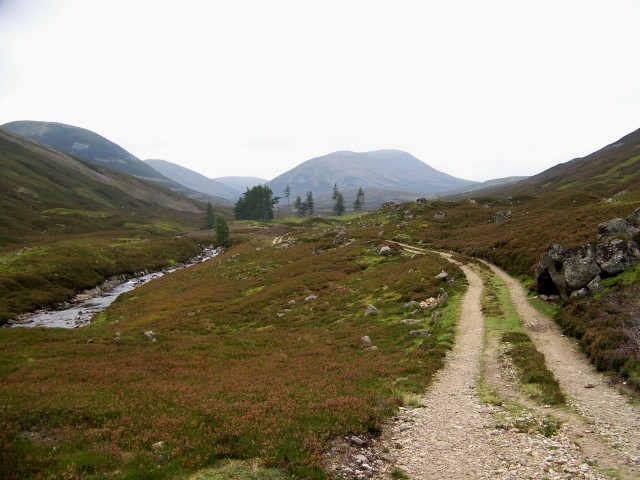 Glen Eye and Beinn Iutharn Mhor in the centre 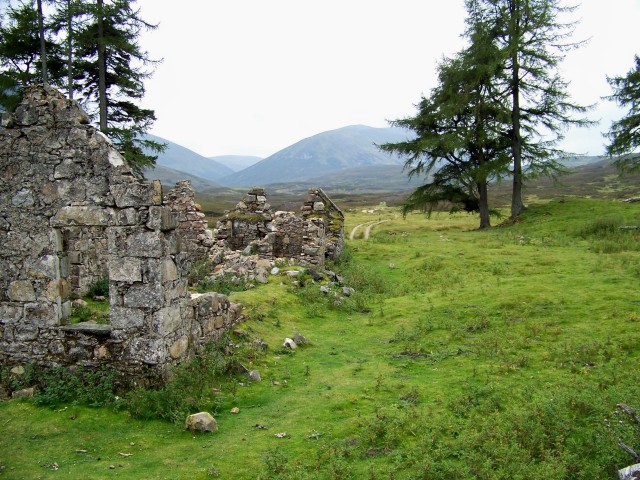 Altanour Lodge – or what remains of it

The track takes me five miles through the most idyllic of glens to the ruins of Altanour Lodge, a once fine stone building beneath an airy stand of pines. The lodge would, at one time, have been the most delightful of retreats, but now nothing remains but a few crumbling walls and gaps where the doors and windows were located. It is a place of peace and restfulness, the sort of oasis you would like to stumble upon at the end of a day’s backpacking when looking for a place to camp – but never do.

Faint paths take me up the river through peat and bogs. Where they lead, I will follow. Within an hour I am standing at the foot of Beinn Iutharn Bheag (a Munro Top), which rises from the boglands like nobody’s business. It’s a relentless church-roof of a slog, followed by an airy ridge walk to Mam nan Carn (another Top) – with a chill wind blasting in my face and damp mist rolling in. As I clamber to the top of my third mountain and first Munro of the day, Beinn Iutharn Mhor, the mist lifts and I arrive at the cairn in something resembling – though a little short of – sunlight.

Nobody told me about the view. Nobody told me what to expect. I stare out from the cairn along this awesome ridge that sweeps round in a great, smoothly-sculpted corrie to plunge symmetrically into a blue lochan. Pale screes drape its sides, beneath a grassy ridge that veers round to the North Top in an inviting crescent. I am mightily impressed. And the path that skirts the rim of the crescent – what a joy to walk, what an absolute pleasure. It’s like walking on the wind.

Way over yonder is a place I have seen. It’s called Carn Bhac and it’s my second Munro of the day. I drop down the clunky white screes from Beinn Iutharn Mhor’s North Top to a wide moor of peat haggs. Just over an hour later I’m on Carn Bhac itself, drinking in views south, west and north to unfamiliar mountains, some of them – seemingly in the Pitlochry area – looking quite spectacular. It’s a tapestry of rich and royal hues. An ever-changing vision. 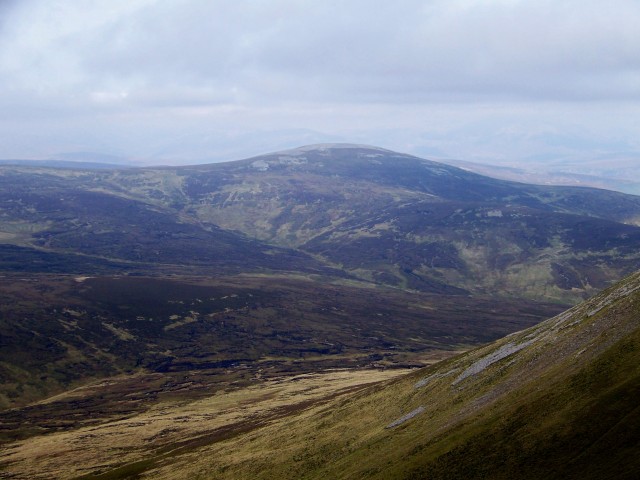 The view towards Pitlochry

I arrive back at the ruined lodge in the late afternoon sun, having swooped down the boggy tundra from Carn Bhac like an ungraceful though exhilarated bird. Sipping tea on the abandoned front step, I am reluctant to leave the ruin beneath the pines. Beinn Iutharn Mhor is prominent in the evening sky beneath wide patches of blue, and the pines are whispering softly. I can almost feel the earth move under my feet.

It takes me 30 minutes to rattle the five miles down the track on the old mountain bike, full of the images, sounds and scents of Glen Ey. Even now, writing these words as I sit in my benighted tent with the petrol lamp hissing, I feel I am still up there, and it is still inside me.

And the sweet tastin’ good life is so easily found. Way over yonder. That’s where I’m bound.

Christ. I only bought the album because I fancied her like mad.