THERE’S a knack to reading a map in the Lake District. It’s important not to convey the impression you are momentarily lost or, worse, absolutely and totally lost. You should unfold the map in a manner that does not suggest panic or confusion. And if any passing walker suspects otherwise, you should allow them to overhear an exasperated comment along the lines of: “I was sure the junction between the igneous Borrowdale volcanic series and the Silurian slates was in this locality – but the detritus in the overlying boulder-clay suggests otherwise. Hmmm. Was Shackleton wrong?”

That’s EH Shackleton, the geologist. Not the bloke who went on a jaunt to the South Pole just as everybody else was heading for the Somme to get blown up.

It’s a cold and clear morning and I’ve left the car beneath the northern end of Cat Bells. I’m heading for Little Dale then the summit of Robinson, but among the old German mineworkings at Newlands, an unknown valley appears to have materialised. It wasn’t there the last time I visited the area – which was back in the 1980s. I feel a bit like Dr Who. I’ve landed in a place that should be familiar, but it has changed beyond recognition and completely thrown me. Obviously there has been a huge tectonic upheaval that went unnoticed by the Keswick Reminder. So I consult the map, in a sort of furtive manner so no one can see me. Peculiarly, the valley is fully represented in a jumble of contour lines. It wasn’t there last time I looked.

This is like waking up one morning to discover your hands look sort of familiar, but there are twelve digits sticking out of them instead of ten. Actually, this isn’t as bizarre as it sounds. There was a girl in my class at school whose elder brother had six digits on each hand and six toes on each foot. There’s a famous tale about him visiting Whitehaven or Workington with the local cricket club and going into a pub after the match. He went to the bar to buy a round and the barmaid said: “How many pints do you want?” He held his fingers up like you do to emphasise an amount when you’re trying to order drinks in a noisy pub, and shouted: “Twelve.” The barmaid half-noted the gesture, and automatically responded with: “Ten?” The chap held his hands up again and shouted: “No. Twelve.” The barmaid paid more attention to his hands this time – and promptly fainted.

The Newlands valley has been mined for copper and lead – and has produced a number of associated minerals – since Elizabethan times. Mining engineers and skilled workers from Germany were brought in under Thomas Thurland and Daniel Hochstetter to develop the veins and exploit the mineral wealth. They formed an organisation under Elizabeth called the Company of Mines Royal, which was the sort of state-sponsored firm that’s frowned upon nowadays. It’s tempting to go into this mining subject in great depth, but I’m not because loads of other people have done it, and accounts can be found by old rogues Peter Fleming here and Dave Bridge here. All I shall say is that the German episode is one of the countless and continuing examples of how Britain has benefited and become richer from contributions made by economic migrants. 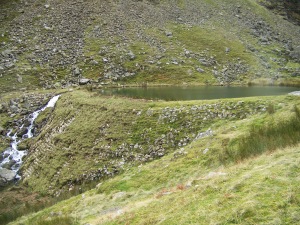 Still confused by the phantom valley that should not be there, and smarting somewhat because I can’t work out where it’s come from, I make a pleasant ascent of Robinson via Little Dale, passing a charming stone dam. From Robinson I cross to Hindscarth, then journey onwards to the summit of Dale Head, where I stop for bait.

There is an abandoned mine just below the summit of Dale Head, on its northern flank, which I visited with the Cumbria Amenity Trust many years ago, and from the top of the crag I can see a ruined building outside the level. I don’t have many recollections of the place, just a vague notion that a group of us trudged along the valley bottom one horrendously wet Sunday morning carrying a load of scaffolding poles to scale a shaft in the depths of the workings. But knowing my memory, I’ve probably got the wrong mine, the wrong valley, and the wrong expedition. Perhaps even the wrong country. I might be thinking of somewhere in Wales.

I am tempted to descend and revisit the place, but instead continue along the fine ridge that stretches from High Spy to Cat Bells in pleasant sunshine.

The northern slopes of Dale Head

The Elizabethan Goldscope Mine – built by Germans

Back at the car, as night draws in, I brew a can of tea and warm up some Czech cabbage soup I made from an old recipe I found on the internet. Actually, it’s probably the type of soup Daniel Hochstetter and his miners would have eaten here in the Newlands valley after a hard day’s graft in the bowels of Goldscope or one of their many other ventures. As the wind whispers in the trees and darkness falls, I can hear their voices.