Seana Bhraigh, before the rain clouds sweep in

RICHARD HANNAY slipped out of his London flat one pale morning and blundered into the Scottish boglands, pursued by a collection of diligent constables and shifty foreign rogues. Before he took the rash decision to embark on his journey, he should have walked from Inverlael to Oykel Bridge on a wet day. That would have been the end of the story. Mind you, he would have forfeited a night in bondage with Madeleine Carroll in a Highland guesthouse, so I suppose it had its compensations.

For me, though, the story is just beginning as I emerge from my tent beneath the scented canopy of a Scottish pine forest as dawn breaks. The grass is wet with dew as I plod along forest tracks from Inverlael, just east of Ullapool, with the sun playing on the undergrowth and butterflies fluttering among the flowers. It’s my tenth day on the Cape Wrath Trail and I’m feeling good.

Had a very itchy night, mind you, with heat spots on my legs and a startling red rash on my left calf. I put these minor distractions down to heavy exertion while wearing gaiters and waterproofs. Probably just need a good bath.

Despite anticipating route-finding difficulties on the wide ridge between Inverlael and Glen Douchary, I make good progress and am eating my lunch in the sunshine just to the east of Seana Bhraigh – one of the jewels in the Munro crown – by 12.30pm.

Ah, Seana Bhraigh. The name has a romantic, almost mythical resonance to it. The correct pronunciation, I am told, is Sheena Vry – which trickles off the tongue like an amber malt and plays on the ear like a breeze in the heather. I climbed Seana Bhraigh a couple of years ago after cycling about nine miles up a god-awful track from Oykel Bridge. It was a warm day, so I promised myself a dip in Loch a’ Choire Mhoir when I got down. The water was bloody cold, it transpired. But having said that, has anyone ever had a warm dip in a loch? No. And on the way back down the track I was propelled over the handlebars of the bike to land on my back in the heather. Luckily, no one saw me.

Lunch over, I head north along the Douchary towards a pair of glacial hillocks between which the river snakes. These hillocks, from now until eternity ends, will be known as The Gates of Doom.

As I pass through The Gates of Doom the sun disappears and the rain scythes in from the east; the river dives into a steep-sided gorge from which it cannot escape, and I am left struggling through an apparently boundless peat bog gouged with deep black sikes and cut by slippery canyons delivering foul streams into the Douchary. This makes for incredibly tough going. By the time I have struggled around two or three of these life-consuming gullies, and blundered through innumerable peat sikes with the rain clattering my waterproofs like machine-gun fire, I am thoroughly demoralised and ready for throwing in the towel. Only there’s nowhere to throw one.

Poring over my sodden map, I note that the path turns north-east at the foot of the glen and runs through what appears to be pleasant forest tracts. In reality, I end up stumbling along a slippery path on the lip of a deep ravine – several hundred feet from top to bottom – and through more peat bogs to reach the shores of Loch an Daimh.

On a sunnier day, the loch, I am absolutely convinced, would be a pleasant place to visit. Today the rain sweeps across its surface from Mullach a’ Bhreun-Leiter and the waters are bleak and choppy. There is no path on the loch’s banks – as promised by the map – so I slosh along the shingle in my soggy boots until after a mile or so I reach a track coming down the side of Cnoc Damh.

Knockdamph bothy is situated near the head of the loch. I seek shelter beneath its welcoming eaves and sip hot 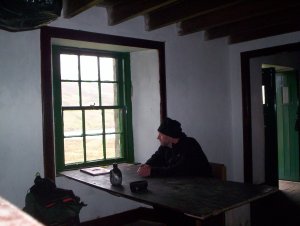 green tea as rain lashes the windows. It is tempting to stay here the night, curl up in my sleeping bag like Mr Hannay (sans Madeleine Carroll, unfortunately) and listen to the rain on the roof – but it’s not even 3pm. So once more I lurch out into the cold, stinging rain.

I make a mental note at this juncture to write a book about the pleasures of backpacking. Half the enjoyment, I decide, is in the planning, the other half in the masochistic satisfaction once it’s completed. Quite where the bit in the middle fits in I really don’t know. I suppose a publisher would regard this as a weak point.

At Duag Bridge I am on familiar ground. I cycled through here on my way to Seana Bhraigh. The rain has eased, the air is still, and I just know it’s going to be one of those heavy Scottish dusks where everything is sodden and the air is absolutely black with midges. I keep an eye open for a place to pitch the tent. But I am only half-looking, for I am toying with the notion of walking an extra couple of miles to Oykel Bridge and spending the night in the hotel.

This really goes against the grain – but these are exceptional circumstances. After all, did Richard Hannay sleep in a little green Robert Saunders tent and wake up to a breakfast of ever-so-healthy muesli? No he bloody well didn’t.

I enter the hotel, and in doing so step through a portal in time and space. Somewhere in the fabric of reality a tear has opened, and I have been drawn through as a moth is drawn through a partially open window. Dinner is at eight, according to a helpful lady. I will be summoned by a gong. I develop a feeling of unease and deep foreboding. I think I’m expected to dress for dinner.

I can detect a severe bout of square-peg-round-hole syndrome coming on. There’s a Latin name for this but it momentarily escapes me. I drop my heavy rucksack on the floor of my room and rummage through the damp contents for my dinner jacket. Shit. Left it at home.

2 Responses to More Than 39 Steps (Another Country – Part 1)